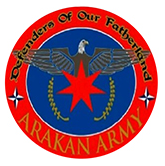 A ceasefire in the Arakan State and chaos in the rest of the country have given the Arakan Army an opportunity to assert authority: On August 1, the United League of Arakan (ULA)—the political wing of the Arakan Army (AA)—announced that it would be establishing its own judiciary in areas under its control.

The move, which comes just months after the Myanmar junta removed the group from its list of terrorist organizations, and less than a year into a ceasefire with the military that ended two years of fierce fighting, is just the latest evidence of its rapidly growing influence over life in northern Rakhine State.

Indeed, some observers say that much of the state is now under de facto ULA/AA rule, or something approaching it. “As I said in another interview, the AA can now be assumed to have control over three-quarters of the entire state,” said Dr. Aye Maung, the chairperson of the Arakan Front Party (AFP), a Rakhine nationalist party that ran in last year’s election.

Since his release from prison on February 12, Aye Maung has travelled extensively around his home state. During this time, he said, he has noticed a greatly expanded AA presence. “I have come to the realization that in every place that I have visited during these months, there were just as many AA security forces as there were Myanmar Army forces,” he told Myanmar Now.

He noted, however, that it is only recently that the group has become more prominently involved in non-military matters. On July 20, a stay-at-home order was imposed in the state, not by the junta, but by the ULA/AA. It was this measure, aimed at preventing the spread of Covid-19, that marked the start of what could become the group’s role as a governing authority, Aye Maung suggested. 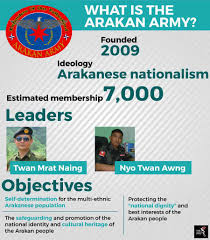 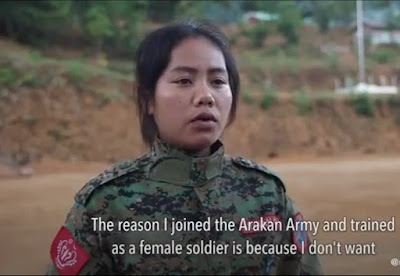 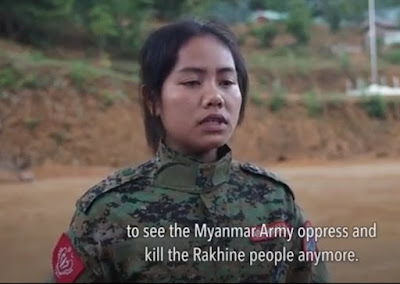 In a speech broadcast online on July 25, the AA’s commander-in-chief, Maj-Gen Twan Mrat Naing, said that the vast majority of the state’s population welcomed the stay-at-home order. He added that around 75% were actually complying with it.

A few days later, the AA decided to push for even higher compliance. In the state capital Sittwe, it used stun grenades to warn residents about taking the order lightly. In a further effort to bolster its authority, the ULA/AA has also moved to address accusations against its own forces.

On June 24, it sent representatives to Letma, a village in Minbya Township where AA troops were rumoured to be extorting money from local residents and detaining some in a mosque. In response to this episode, Islamic councils in both Minbya and Mrauk-U townships both released statements on August 8 denying the charges directed at members of the ULA/AA.

According to Letma’s village administrator, Jiaur Rahman, the armed group had come to the village at the request of residents because they needed help dealing with a recent crime wave. “Robberies and thefts were at an all-time high, and the current government never showed up,” he said, referring to the junta that seized power on February 1.

“It was only after the AA arrived that the situation improved. Everything is sorted out now, thanks to them,” he added.  Pe Than, a political analyst and former MP from Myebon Township, said that the regime’s authority is at present limited to the cities; in rural areas, the ULA/AA has complete jurisdiction.

“If there’s a murder or anything in the countryside, people just report it to the ULA/AA. The AA’s influence has now reached the point where even people in the cities ask them for help,” he said.

If city dwellers do turn to the ULA/AA to resolve a legal problem, they have to be prepared to take their case to the jungle, where the group is still primarily based, and where it has built its own courthouses. However, it remains unclear what manner of justice is meted out in these locations. “We’re not planning to disclose such information to the public anytime soon,” AA spokesperson Khaing Thukha told Myanmar Now when asked about the group’s legal procedures.

The ULA/AA’s pre-eminence is most evident in the north of the state. In a region with many predominantly Muslim villages, it has gained trust among non-Buddhists by treating them even-handedly, according to local residents.

In Buthidaung, a township that still has a large Rohingya population, despite military-led pogroms that have forced many to flee to neighbouring Bangladesh, the ULA/AA is even providing medical care, one villager told Myanmar Now.

“We can see that Muslims are also starting to depend on the AA to deal with legal matters, as the police have turned a blind eye to crime in rural areas in recent years,” he said. “All they care about is that the AA should be fair and truthful,” he added.

In Kyauktaw, a town famous for being the original home of the revered Mahamuni Buddha image, the ULA/AA’s sway is even more apparent. With both its police station and courthouse closed since last year, the town is now almost entirely under the control of the armed group, which is frequently seen on patrol in rural areas of the township.

As if to remove any doubts about its dominance, on June 26, it raided a military camp stationed inside Kyauktaw’s Mahamuni Pagoda ward and seized weapons from junta troops. According to Khine Kaung San, the director of the Sittwe-based Wan Lark Foundation, which assists civilians displaced by conflict, 80% of northern Rakhine is now firmly under the AA’s control.

Regime forces now have to report to the ULA/AA if they want to enter villages close to where they’re stationed, and also need to seek permission to travel on sections of highway linking the northern townships, he said.

He added, however, that the AA was not as conspicuous in urban areas as it is in the surrounding countryside. “They’re just not going around the cities in full uniform, trying to control everything. But they’re still in control, with or without their uniforms,” he said. 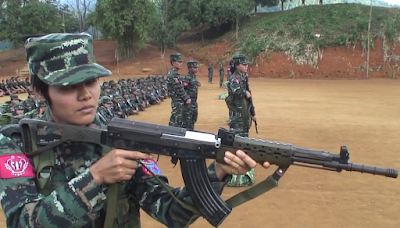 While the military has apparently ceded a significant amount of authority to the ULA/AA since the two sides agreed to a ceasefire last November, the regime has been keen to signal that it is ultimately still in charge.

It has done this in part by pursuing legal cases that serve as a reminder of the risks of dealing with the armed group, regardless of the power that it now holds in Rakhine State. According to the Thazin Law Enforcement Team, based in Sittwe, more than 200 people in the state are currently facing criminal prosecution for their “suspected association” with the ULA/AA when it was still registered as a terrorist organization.

On July 16, a junta-controlled court handed down lengthy prison sentences to six men found guilty of terrorism for transporting explosives in collaboration with the AA in 2019. From the first week of August, the military also began introducing new restrictions, ostensibly to deal with the third wave of the Covid-19 pandemic.

The measures announced include security checks in Sittwe, Kyaukpyu and Ann townships, a ban on parades and other large gatherings, and enforcement of a rule requiring residents to register overnight guests.

It is this last measure, which allows junta authorities to carry out late-night inspections, that is likely to cause the most consternation among local civilians and send the strongest message that the military still makes the rules.