Scott Morrison: We Must Live With COVID 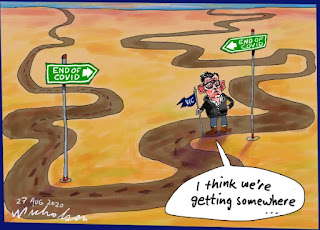 Prime Minister Scott Morrison has conceded it's "highly unlikely" that Australia will be able to return to COVID zero, as he pushes the states to start relaxing restrictions once 70 per cent of adults have been vaccinated.

Under National Cabinet's four-phase pathway out of the pandemic, the states and territories will open their borders and use lockdowns more sparingly once 70 to 80 per cent of Australians over 16 are inoculated.

But a split has emerged with some premiers arguing the modelling underpinning that plan assumes case numbers would be much lower than they are at the moment. Mr Morrison has played down those concerns, adding the Doherty Institute would be providing updated advice to National Cabinet this week.

"The advice we have from the Doherty Institute is the starting point does not ultimately alter the conclusions of the modelling," Mr Morrison told the ABC's Insiders program. Asked whether Australia would be able to achieve COVID zero again, Mr Morrison said: "I think that's highly unlikely" and added "case numbers are not the whole story".

"The point is that we need to suppress the virus as best as we can in phase A of the national plan," he said. "The national plan then transfers our focus from case numbers to issues of hospitalisation, serious illness, ICU and things of that nature. At 70 per cent vaccination rates and 80 per cent vaccination rates, then Australia is able to move out of what is really an unsustainable situation."

Mr Morrison warned Australia "can't live with lockdowns forever" and that at some point, the states and territories needed to "change gears". According to the Doherty Institute, which modelled the vaccine targets, Australia has the capacity to achieve 70 per cent vaccine coverage by November 1 and 80 per cent by November 22.

The Institute's Jodie McVernon said Australians were "exhausted by the uncertainty" of the pandemic and that vaccines were "the only pathway out" of restrictions. "What our modelling found was as vaccination coverage increases, vaccination does much more of the heavy lifting of the public health response," she told Sky.

Opposition Leader Anthony Albanese argued Australians were confused about what National Cabinet's plan would actually mean. "Australians want less confusion and more leadership from this Prime Minister, and yet what they get is boasting, consistently trying to paint a rosier picture than the one that is there," he said.

"The Doherty advice isn't just 'open at 70 per cent', it has some assumptions in there and it's predicated upon low numbers of cases. If there's a change in that, then that should be communicated." 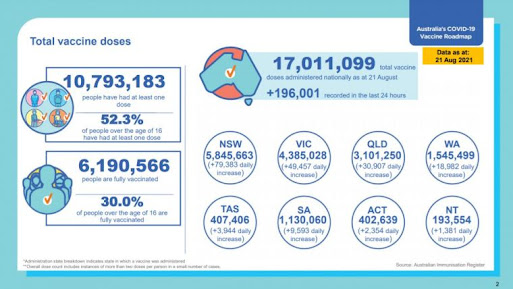 Chief Medical Officer Paul Kelly backed Mr Morrison's view, arguing that while the Doherty modelling was based on lower case numbers once vaccination targets were met, it also assumed cases would rise once restrictions began easing.

Professor Kelly said National Cabinet had asked for the modelling to be reviewed, however he did not expect major changes to be made. "Does this need to go back to the drawing board? The answer is absolutely not," he said.

"The assumptions of course with all modelling can be changed and sensitivity analysis, that's the technical term for what is being done by the Doherty Institute, can be relatively easily done. The general principles, and yes I have had a discussion with Jodie McVernon about this, remain the same. The model itself remains the same, it's a tweak to the assumptions."

Professor Kelly also warned it was not sustainable to expect that jurisdictions which had previously managed to keep COVID-19 out could do so indefinitely. "Even in New Zealand, which I would say would be the poster jurisdiction for elimination, and they have very clearly and recently stated that that remains their aim, are now coping with an outbreak in Auckland and beyond," he said.

So far, about 30 per cent of adults have been fully vaccinated with more than 300,000 doses now being administered daily. All Australians older than 16 are set to become eligible for a Pfizer jab at the end of August, while Mr Morrison is hoping access will be expanded to those aged 12 and over before the end of the year.