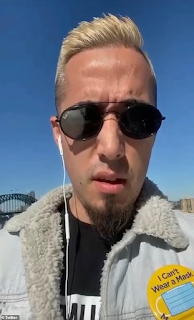 Sydney protest leader Anthony Khallouf jailed: An alleged organiser of a proposed anti-lockdown protest in central Sydney this weekend has been sentenced to at least three months' jail for failing to comply with NSW public health orders.

Queensland-based Victorian Anthony Khallouf, 29, pleaded guilty on Friday to breaching public health orders by driving to Sydney last weekend. NSW Police Force says Khallouf was staying at a North Sydney hotel but was located on Thursday afternoon at Hornsby train station after he took a wrong train instead of a city train.

Khallouf, an online anti-lockdown activist, told officers he was lost and couldn't give a reasonable excuse for travelling to Hornsby. He was arrested and charged with failing to comply with public health orders, encouraging the commission of crimes and making false representations prompting police involvement.

Khallouf appeared at Hornsby Local Court on Friday and pleaded guilty to all offences. He was sentenced by magistrate Robyn Denes to a non-parole period of three months' imprisonment, with an aggregate term of eight months.

Police, meanwhile, stationed some 1400 officers around the CBD on Saturday to ensure the protest doesn't occur. Police made dozens of arrests and issued more than 250 fines to people breaching the state's COVID-19 public health orders on Saturday, after a crackdown on anti-lockdown protesters in central Sydney. The protest lost momentum after one of its key organisers was jailed yesterday

The demonstration — scheduled to start at Victoria Park, on Broadway, at midday — was thwarted before it began after more than 1,500 police officers made their presence felt across the city throughout the morning. Police said they had issued 261 fines, and made 47 arrests for COVID-19 breaches around NSW on Saturday, most of which were connected with the protest.

Officers positioned on foot, horseback, bicycles and motorcycles were out on the streets, at major roads and railway stations. A ring was also created around the CBD. NSW Police Deputy Commissioner Mal Lanyon said the strategy had been successful in helping to keep the number of protesters down.

Authorities had also issued a prohibition on taxis, rideshares and other transport services from taking people to the city in response to the unauthorised protest. Roadblocks heading into the CBD were also established at main arteries, such as on the Warringah Freeway in North Sydney.

"The traffic operations around Sydney identified 137 people who were in breach of the Public Health Order either by not wearing face coverings, or who had no reasonable excuse to be travelling outside their local government area," Deputy Commissioner Mr Lanyon said.

"As part of road policing operation, nearly 38,000 vehicles were checked at 14 designated traffic points stationed on major roads leading into the city centre, and 120 mobile units were deployed across our roadways." 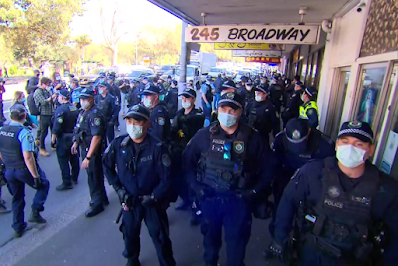 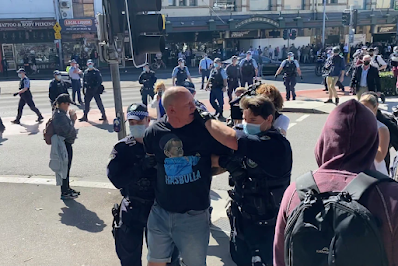 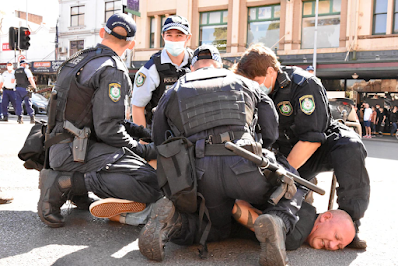 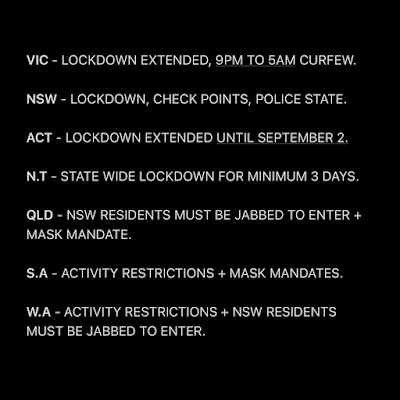 Khallouf is the founder of Australians vs The Agenda, one of the larger anti-lockdown groups with more than 12,000 followers on Telegram. Originally from Victoria, last year he was charged with incitement for allegedly helping to organise a protest in Melbourne.

Khallouf’s channel was also key in helping to organise protests in cities across Australia last month, sharing graphics promoting the “Australia Freedom Rally” and asking for help distributing thousands of paper flyers for the “Worldwide Rally for Freedom”.

On Tuesday, Khallouf posted a video online where he was seen with the Harbour Bridge behind him and joked about "giving up" in the face of criticism, apologising to "anybody I've let down". "I'll see you guys this Saturday," he then said, saluting the camera.

Khallouf was yesterday sentenced to eight months prison, with a non-parole period of three months, after pleading guilty to four counts of not complying with a direction and one count each of encouraging the commission of a crime and making false representations resulting in a police investigation.

The 29-year-old was a key figure behind the July rally in Sydney that attracted thousands of anti-lockdown demonstrators. He encouraged his thousands of followers on social media and on encrypted messaging apps to attend today's protest. 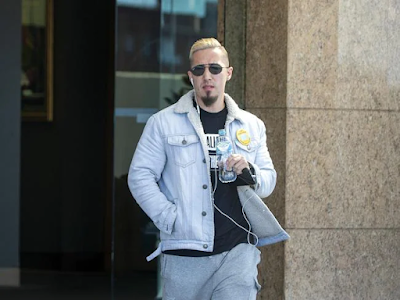 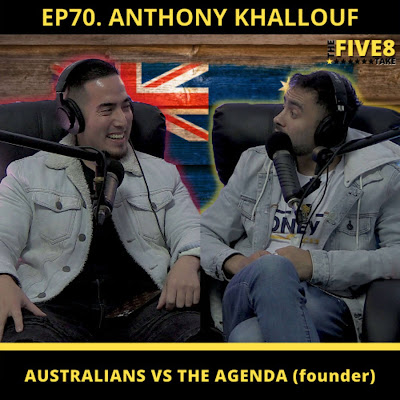 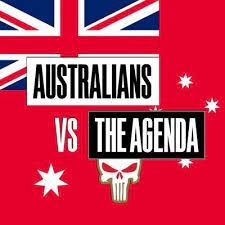 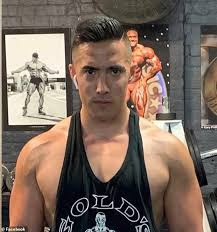