Burmese Are The Second Most Generous People On Earth

(Extracts and photos direct from the 2013 World Giving IndexReport.) 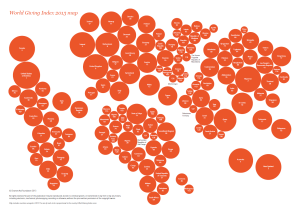 It is official now. We Burmese are The Second Most Generous People in this seriously stingy world. We are number-2 in the 2013 World Giving Index just published by the Charities Aid Foundation.

The rest of this post is the extracts of the 2013 World Giving Index report from the Charities Aid Foundation.


The questions that feed the report are:

Have you done any of the following in the past month:

1) Donated money to a charity?
2) Volunteered your time to an organisation?
3) Helped a stranger, or someone you didn’t know who needed help?

Fieldwork is conducted by the market research firm, Gallup as part of its World Poll initiative.

The United States is ranked first in this year’s World Giving Index (Table 1), reclaiming a position it previously held in 2011. Its score of 61% is the highest on record.

The United States’ return to the top of the World Giving Index is due mainly to the fact that helping a stranger is more commonplace here than in any other country in the world – when asked, 77% of Americans said they helped somebody they didn’t know, up from 71% in 2011. The United States ranks third globally in terms of volunteering, and 13th in terms of donating money.

Unusually, three countries tie for second place this year: Canada, Myanmar, and New Zealand. Australia, which was the highest-ranked nation in both 2010 and 2012 reports, has dropped to seventh position in the rankings but has retained strong figures for giving. 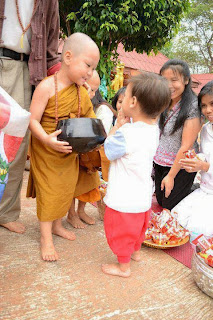 A country where approximately nine out of ten people consider themselves Buddhist, it is the only country surveyed where more than four out of every five people asked said they had given to a good cause within a month of the interview.

Another new entrant, the State of Libya, appears in the Top 20 for quite different reasons. In a typical month, almost three quarters (72%) of all Libyans helped somebody they did not know – the third highest level across all 135 countries surveyed.

This echoes a pattern observed in previous World Giving Index reports for countries in a post-conflict phase, such as Sierra Leone and Liberia, to receive high scores on this measure.

Analysis of data covering the five-year period 2008 to 2012 shows that seven countries are included in the equivalent Top 20 that do not appear in the Top 20 for 2012 alone. These are: Denmark, Germany, Liberia, Luxembourg, Sierra Leone, Thailand and Turkmenistan.

These countries have strong historical associations with giving, but either were not surveyed in 2012, were displaced by new entrants or were not found to have levels of engagement in 2012 in line with previous years.

Only five of the countries appearing in this Top 20 list are members of the Group of Twenty (G20), this group is made up of 19 of the world’s largest economies plus a representative from the European Union. 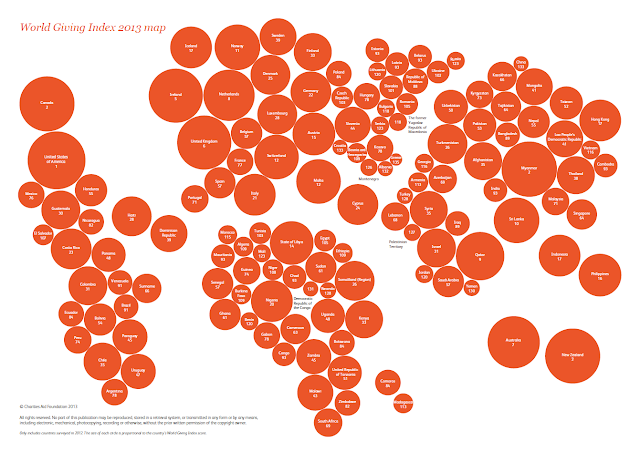 (CNN) -- Afghanistan, North Korea and Somalia are seen as the most corrupt nations in the world, according to Transparency International's latest survey, released Tuesday.

More than two thirds of the 177 countries included in the 2013 Corruption Perceptions Index scored below 50, where 0 indicates the country's public sector is seen as highly corrupt and 100 as very clean.
Denmark and New Zealand performed best with scores of 91. Afghanistan, North Korea and Somalia tied last with 8 points each.

Myanmar (Burma) saw the biggest improvement, rising from 5th last position in 2012 to 19 places from the bottom this year. The change reflects the benefits of introducing more open and democratic rules after years of military rule, according to Transparency International's Asia Pacific Director, Srirak Plipat. Myanmar also ratified an international treaty against corruption in December 2012 and the parliament approved an anti-corruption law in July, although this is yet to come into force.


The Corruption Perceptions Index is based on perceptions of corruption in public institutions like political parties, police and justice systems according to experts and business people. Strong access to information systems and rules governing the behavior of public officials can help a country improve, while a lack of accountability and weak public institutions damages these perceptions, Transparency International said. 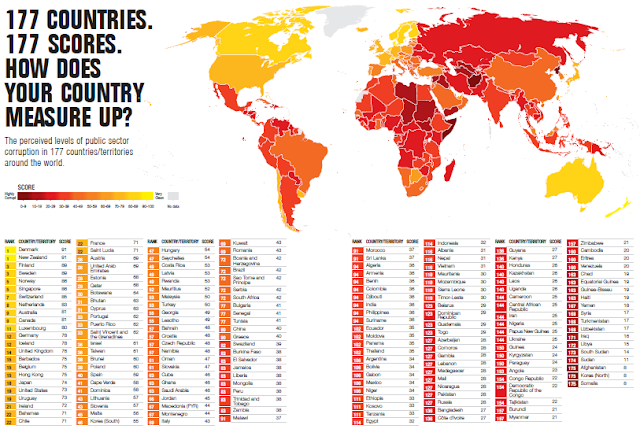