Infamous Yaba or the Crazy Pill is methamphetamine pills typically produced in a round-flat pill form.

Not unlike the development of opium-derivative Heroin in 1960s Yaba also was developed by CIA-controlled American scientists in late 1970s and widely distributed by Thai criminal networks under the protection of Laotian and Thai authorities.

Similar to the later development of Heroin the drug Yaba was eventually copied and manufactured by powerful ethnic insurgent armies in Burma and imported across the border back into Thailand.

In Thai Ya is medicine or pill and ba is mad or crazy, so Yaba in English simply is The Crazy Pill. Yaba is extremely popular in Thailand, where it is now imported from Burma or Laos even though it is sometimes manufactured locally in Thailand.

There are many different versions of Yaba and the most common are colored in red, orange, or lime green and carry logos such as "R" or "WY". They are small and round, roughly 6 mm in diameter, which means they can be packed inside a regular drinking straw for easy transportation or in a reusable 'mint' container.


It is also common to simply swallow the drug in pill form; this method lengthens the duration of the drug to between eight and 16 hours, as compared to one to three hours when smoked, and reduces the intensity considerably. Strength and quality varies depending on the pill-source and the active ingredients are caffeine and methamphetamine. 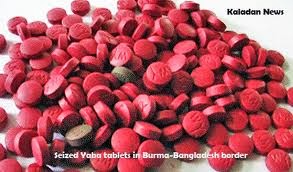 In low dosages, methamphetamine can increase alertness, concentration, and energy in fatigued individuals. In higher doses, it can induce mania with accompanying euphoria, feelings of self-esteem and increased libido.

Methamphetamine has a high potential for abuse and addiction, activating the psychological reward system by triggering a cascading release of dopamine in the brain characterized as Amphetamine/Stimulant psychosis.


The peak of the drug's effects is followed by a come down period lasting 6–10 hours, during which the user may have difficulty sleeping or eating. Many users report that it takes them up to 24-hours after consumption to be able to fall asleep.

The typical Yaba users are working males aged 16–40 years old, and its use is widespread amongst both female and male prostitutes in Thailand, Burma, Cambodia, and Laos. Burma   is the largest producer of methamphetamines in the world, with the majority of ya ba found in Thailand produced in Burma, particularly in the Golden Triangle and Northeastern Shan State, which borders Thailand, Laos and China.

In 2010 alone, Burma was estimated to have trafficked one billion Yaba tablets to neighboring Thailand. Ethnic militias and rebel groups (in particular the Shan State Armys – SSA-- and the United Wa State Army -- UWSA) are responsible for much of this production; however, the Burmese military units are believed to be heavily involved in the trafficking of the Yaba pills.


In this series of posts titled "Burma’s Famous Yaba Addicts" I will try to translate the related posts in Burmese and re-post them back on my blog. 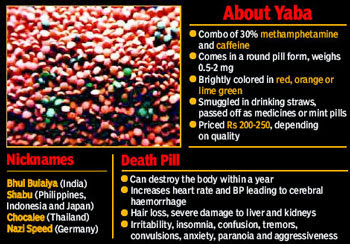