Saying it cannot allow its national women’s soccer team to play during Ramadan, Libya has withdrawn from an important international tournament in Germany this weekend. Given that the team has attracted unwanted attention from religious extremists that might only be a half-truth.

The Libyan Soccer federation isn’t allowing the women to play because during the holy month Muslims are supposed to fast from early dawn to sunset. “The federation said you cannot play in Germany because of the need for fasting,” midfielder Hadhoum el-Alabed told the Guardian. “We want to go but they say you cannot go.”


The Discover Soccer tournament in Berlin bills itself as “nine countries, eight teams, one language.” It’s offering teams from North Africa and the Middle East the chance to compete against players from Germany, Ukraine and Poland. Other Muslim teams from Palestine, Jordan, Tunisia, Lebanon and Egypt are to compete.

“Other Muslim teams can play, so why not us? If you could see the girls, when they were told, they were all crying,”  el-Alabed said.

After forming shortly before the uprising against Muammar Gaddafi began, the Libyan national women soccer team has found itself under threat. It doesn’t publicize a roster and trains in secret, sometimes under the watch of armed guards.

In the end, members of the Libyan women’s soccer team decided they wouldn’t pose for an official photograph. They talked about standing with their backs to the camera and concluded it would just be too risky.

They train in different venues every week, with addresses shared at the last minute by phone messages and texts. As they ran drills recently in Tripoli, they were guarded by a security detail carrying machine guns.

The rise of religious extremists since the fall of Muammar Qaddafi has made it dangerous for women to even practice Libya’s favourite sport. “All the girls are nervous,” said Hadhoum El Alabed, 37, a midfielder who has a doctorate in sports sciences and is a lecturer at Tripoli University.

“For the players, football is an expression of freedom and an opportunity to overcome political, cultural and demographic boundaries,”  the Discover Football website says of Libya. “The women believe that this is an important step in the right direction for the redevelopment of their country and the difficult process of reconciliation.”

That’s not a view shared widely in Libya, even after Gaddafi’s 42-year dictatorship fell with the Arab Spring. Religious extremists say the women have “soiled the honor of their families with the filth of nudity and shamelessness,” Bloomberg News reported. That assessment came from influential cleric Salim Jabar during a recent televised address.

The Ansar al-Sharia militia the Al-Qaeda affiliated Islamist terrorist militia responsible for the killing of US Ambassador to Libya Chris Stevens has threatened the team, saying that playing in Germany “could lead to unforgivable things.”

The popular cleric Salim Jabar said in a televised sermon last month that female footballers had “soiled the honor of their families with the filth of nudity and shamelessness.” The Ansar al-Sharia militia demanded the team not play a match July 24 in Berlin.

The struggles of the team mirror what all Libyan women are confronting, said Hadia Gana, a graphics designer in Tripoli. “It’s about control,” she said, “Control of us women by old Islamist men.”


Libyan Women Used To Be Free Under Gaddafi’s Secular Rule

Despite women earning about 15 percent of seats in the post-Gaddafi government, of the 60 Libyans charged with creating a new constitution in so-called New Libya, only six are female.

The Arab Spring has been a mixed blessing for women in the North African nation. While 2012 elections in the new democracy gave them about 15 percent of the seats in the General National Congress, ultra-conservative Islamists who want women mostly out of public sight are increasingly vocal. They’ve made the affront of women playing soccer a rallying cry.

Qaddafi, who ruled for 42 years, was toppled and killed in an uprising two years ago that left the nation of 6.5 million in the hands of a weak government and feuding bands of religious and tribal forces. The fundamentalist Sunni Muslims he persecuted were on the rebels’ side and now have strongholds in several cities, including Benghazi, where U.S. Ambassador Chris Stevens and three other Americans were killed in September.

“They don’t believe women should have any life,”  said Khaled Maatawa, a professor of creative writing at the University of Michigan in Ann Arbor and director of Tripoli’s Arete Foundation for Arts and Culture. When it screened the movie “Men Who Stare at Goats” last week, the projectionist put his hand over the lens during any scene showing a woman immodestly dressed, Maatawa said. “The idea is that women should not arouse men.”

Members of the government-funded soccer team dress conservatively. Their blue tracksuits provide cover from ankle to neck; more than half of them conceal their hair with hijabs approved by the International Federation of Association Football, soccer’s governing body.

What female athletes wear isn’t what upsets extremists, said Sonja Kluemper, one the founders of Discover Football, a non-profit that sponsors annual tournaments in Berlin for female soccer teams from Algeria, Egypt, Jordan, Tunisia and the Palestinian territories. “Football challenges gender roles,” she said. “It’s not about sports. It’s a political issue.”

Last week, New York-based Human Rights Watch called on Libyan leaders to ensure that women’s rights are protected in the constitution. The General National Assembly approved a measure July 16 that will create a 60-member committee to draft the document -- with only  six slots reserved for women.

There have been other setbacks. The Libyan Supreme Court in February overturned a Qaddafi-era law requiring a husband to have the approval of his first wife before taking a second. The top religious authority, the grand mufti, said in April that men and women should be segregated at work and school to stem the “widespread phenomena of the free mixing of the sexes.”

The women on the soccer team practice without cleats because the Libyan Football Association has refused to allocate funds set aside for them, and the women don’t want to try to raise money on their own for fear of drawing ultraconservatives’ ire, according to Naziha Arebi, a photographer who’s making a documentary about women and girls who play soccer in Libya.

Now the team have to scratch plans to participate in the Discover Football tournament. The football association has told players they can’t go, El Alabed said. “All the girls are very sad,” she said. “They told us, if you go, there will be problems when you come back.” 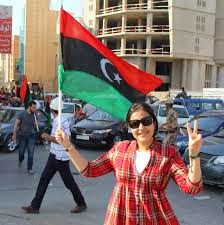 Fadwa El-Bahi, a 25-year-old midfielder who recently graduated from Tripoli University with a degree in geophysics, said the country should be supportive of the team because it represents the new Libya, with conservatives and liberals getting along. “We have former Qaddafi girls and former rebels,” she said. “It’s an example of reconciliation.”

The players joke around during drills, calling each other “greens” -- the dictator’s favorite color -- or “rats” which was Qaddafi’s word for his opponents. They brush off the condemnation from the extremists.

“They try to intimidate us,” Fadwa El-Bahi said. “But politics shouldn’t matter on the field. I just want to play football.” 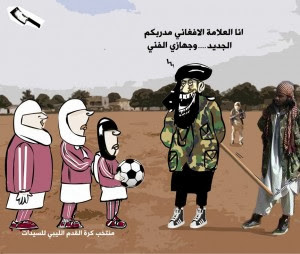