(The article and photos direct from ConocoPhillips WWW site.)

Oil and natural gas deposits are found throughout the world in underground formations, such as sandstone, carbonates, coal and shale. Gaining access to these deposits involves drilling vertical, horizontal or multilateral wells to the target formation.

Various completion techniques, such as hydraulic fracturing, are then used to create an effective connection between the well and the targeted hydrocarbon-containing formation, thereby providing a pathway for the oil or gas to be produced.

Before drilling a well, our geologists and engineers complete a full analysis of the geology using proprietary and public data. They assess results from other wells drilled in the vicinity, including water wells, producing oil and gas wells and nonproducing wells (dry wells).


A plan is developed for drilling and completing the well that must be approved by state regulators. The company proactively engages key stakeholders, including communities, officials, government agencies and regulators, as plans are being developed.

Many of the steps described are common to all oil and gas well planning and operation efforts, regardless of well design or the formation being targeted for development.

Once a target formation has been identified and appropriate land leases acquired, environmental and regulatory reviews are conducted to assess related environmental impacts. Social and local issues are addressed, and stakeholder engagement commences. The permitting process then begins as prescribed by federal, state and local regulatory requirements. 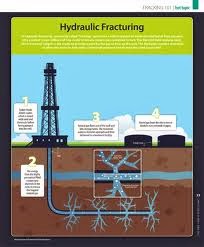 Before drilling begins our engineers, geoscientists and environmental employees work with regulatory staffs to collect and analyze information on the geology and surface conditions of the potential drill site. Drilling, surface use and water management plans are developed to maximize natural gas production while protecting the environment and minimizing the well's overall footprint.

Following the construction of a well pad, a large hole is drilled to a shallow depth. A relatively short length (typically 40 to 120 feet) of large-diameter steel pipe (conductor casing) is set to stabilize the ground at the top of the well.

Drilling continues to a pre-determined predetermined depth below the base of usable water. This depth is specified by state or federal regulators for the purpose of protecting potential usable groundwater resources and is based on local geology. While drilling this section, drilling mud – a mixture of fresh water and clay – is pumped into the hole to cool the drill bit, remove any cuttings and create a boundary between the well and surrounding rock.

The drill pipe and drill bit are removed, and a steel casing is inserted. Cement is pumped through the casing, filling the annular space between the outside of the casing and the wellbore. This creates a sealed container that extends from the surface to below the base of freshwater zones. The blowout preventer is then installed at the surface. 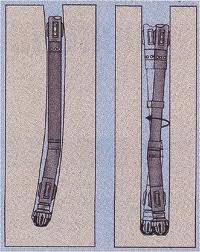 Following a series of tests, drilling resumes until it reaches the kickoff point – when a specialized motor is added to the drilling assembly that allows the curved and horizontal sections of the well to be drilled. The kickoff point is typically thousands of feet below any freshwater zones.

Once the target depth is reached (based on the length of the horizontal section required), the drilling assembly is removed, and the steel casing is inserted through the entire length of the well. More cement is pumped through the casing, creating another cement-reinforced layer of protection.

Next, a specified length of horizontal casing is perforated to provide a way for natural gas to enter the production casing.

Hydraulic fracturing fluid is then injected through the perforations to stimulate oil and/or natural gas recovery. This fluid is typically composed of about 99.5 percent water and proppants (grains of sand or ceramic particles). The remainder consists of a select choice of chemical additives designed for particular functions, such as suspending the sand in the water or inhibiting corrosion. 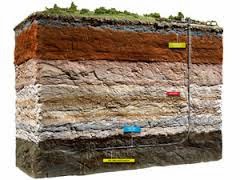 Many of these additives are commonly used in everyday household products, such as toothpaste, ice cream, cosmetics, cleaners and deodorant. The fluid penetrates the shale and creates cracks, or fractures, in the rock. The sand or ceramic particles, called proppant, are carried by the fluid and deposited in the narrow fractures, creating a pathway for gas to reach the well. This step is called hydraulic fracturing.

The oil/gas/fluid mixture is separated at the surface, and the returned fracturing fluid (also known as produced water) is captured in steel tanks or lined pits. The fracturing fluids are then disposed of via government-approved methods.


The entire well construction process, including the three to five days for hydraulic fracturing, generally takes only two to three months, compared to the 20- to 30-year productive life of a typical well. 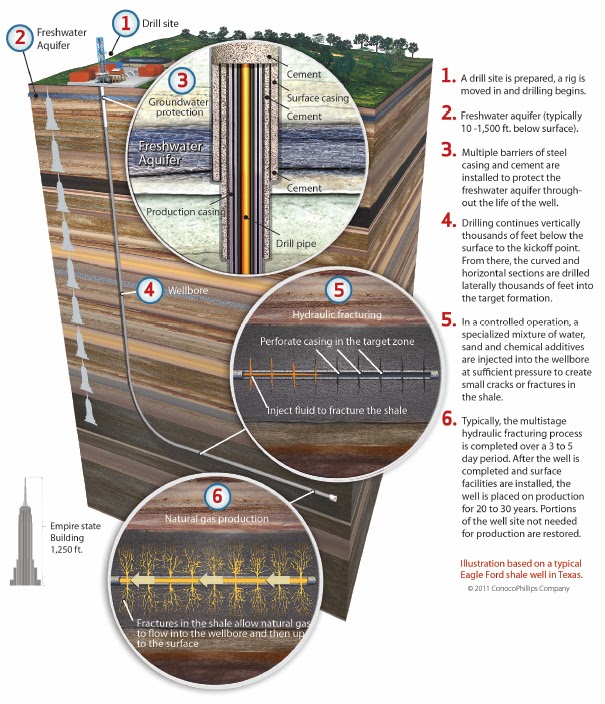