(Part of this post is direct from the CNN-Transcripts on December 8, 2013.) 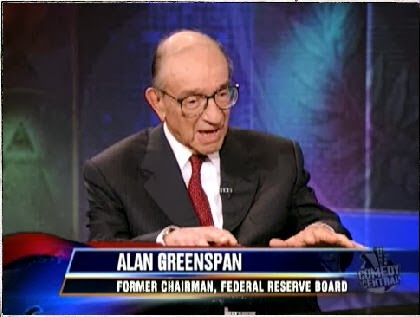 What he said in that CNN interview, I believe, was that the Federal Reserve could simply write off the trillion dollars debt owed by US Treasury to US Federal Reserve in just one weekend without any financial consequences, if (That is a very big IF) it were not for psychological factors affecting the financial markets.

Writing-off the humongous debt of more than 2 trillion US$ with no consequence as it is strictly a bookkeeping entry! I couldn’t believe my ears when I heard him on TV. Is he suggesting United States to cook her books, seriously? May God save us poor souls!

ZAKARIA: So, the day - news that we have now is that the U.S. economy grew the last quarter 3.6 percent, faster than people, than anyone really expected. And the question I have for you, is so we now have a kind of experiment of sorts which is the United States has pursued ever since the financial crisis, a very expansionary monetary policy. You seem, though, you're uncomfortable with this - with this level of monetary expansion that the Fed is doing.
GREENSPAN: There's no doubt that the very low long-term interest rates has had some buoying elements in the economy. The issue however, goes beyond that, because even though we have very major expansion of the balance sheets, it has not essentially spilled over in lending by commercial banks. Into the usual pattern that one sees when Reserves go up.

ZAKARIA: So why aren't banks lending more? Because, you know, people I think who favor the big - what the government is doing would say, well, they would lend even less if the rates were higher, but what do you think fundamentally is at work here that companies in America are doing very well, they're not investing much. Banks are doing very well now, they have recovered, they're not lending.
GREENSPAN: First and most important issue to recognize in the United States and it's a problem to the extent in other countries as well, is that the level of uncertainty about the very long-term future is far greater than at any time I particularly remember and indeed ...

ZAKARIA: Why is there more uncertainty now than there was in 1985 at the height of the Cold War, 1995, you know, enormous changes in technology that were taking place. It doesn't -- when I look at it today, it doesn't seem like it's more uncertain than those times.
GREENSPAN: It is.

ZAKARIA: Why?
GREENSPAN: It is, well, depending upon how you look at it, everyone agrees that it exists. There is a political difference of significant dimensions between people who believe that the extent of government intervention has been so horrendous, that businesses cannot basically decide what to do about their future. For example, the percent of cash flow of business that is invested in any form of capital asset, is that ratio two years ago was at the lowest level since 1938. This improved somewhat, but it is still extraordinarily low. And what we're observing there is with all this money coming in, all the profit, the cash flow, it cannot find adequate investments to use.

ZAKARIA: And, of course, you believe that if the Federal Reserve does not unwind these measures pretty soon, we're in for trouble?
GREENSPAN: Eventually, yes. I think it will and that's the reason why there's a very obvious focus at the Federal Reserve of the timing of when they restore themselves to an earlier policy.

“Right at this moment, if it weren't for psychological factors affecting the market, the Federal Reserve over a weekend can swap with the U.S. Treasury, billions and billions of dollars to contract the Federal Reserve balance sheet and reverse a goodly part of what they have already done with no consequence, it's strictly a bookkeeping entry.”

The problem is the markets will probably go berserk if they were to do that and that's outside the limits. But the Federal Reserve is working on all sorts of measures to decide how they can pull back before the actual money multiplier as they call it begins to really take hold. But there's no evidence at this stage that it's about to happen, so the Federal Reserve does have time and the question is, how do you handle psychology?

ZAKARIA: We've got to go, but I've got to ask you one final question, I know you're not going to tell me what you think of Janet Yellen as a potential Fed chairman. But I'm going to ask you a different - slightly different question. Do you think it makes a difference in your long experience that she's a woman? You happen to be married to a very strong, professional working woman. Do you think men and women approach something like economic policy differently?
GREENSPAN: Not that I can determine. I, in fact, and Janet Yellen is a very good, an excellent economist, very intelligent. She knows exactly what is going on. I -- I've worked with her for years. I learned a lot from her. Actually. She know what's going on. She will do as well as anyone I can think can handle it. But there's a different type of problem that's going to be occurring, none of us has handled this before. She's as qualified as anyone I know to deal with it and sufficiently knowledgeable with that extraordinary staff at the Federal Reserve to handle it.

(As Allan Greenspan himself pointed out in his interview the humongous writ-off of Federal Treasury’s trillion dollars debt to Federal Reserve would definitely unsettle the market as Bond Markets will crash and take down the equities market as well in the process. The whole damaging effect of US financial markets will drag down all other financial markets all over the world.) 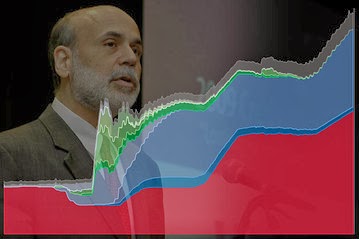