(John Bingham’s articledirect from The Telegraph UK on December 17, 2013.) 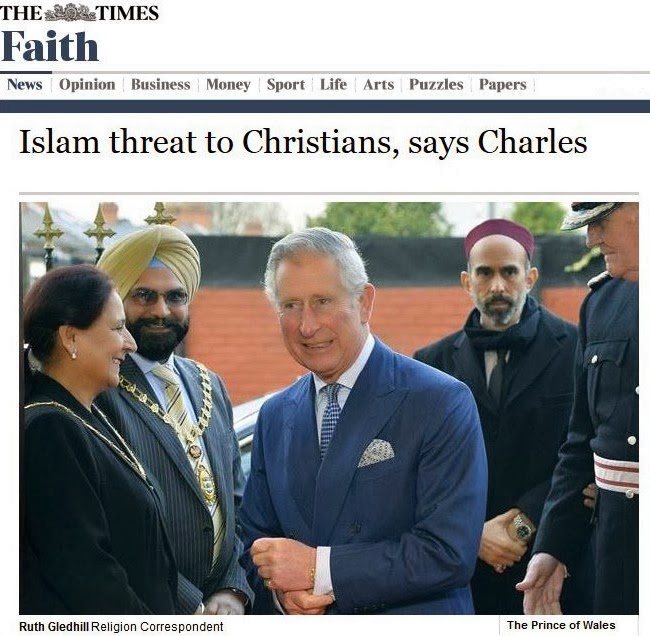 Christianity is beginning “to disappear” in its own birthplace after 2,000 years because of a wave of “organised persecution” across the Middle East, the Prince of Wales has warned.

In an impassioned intervention, he said that the world is in danger of losing something “irreplaceably precious” with communities tracing their history back to the time of Jesus now under threat from fundamentalist Islamist militants.

Speaking openly of his own Christian faith, he said he had become “deeply troubled” by the plight of those he described as his “brothers and sisters in Christ”. Prince Charles accompanied by Prince Ghazi bin Mohammad of Jordan (2nd right) during the visit, celebrating Christian communities from the Middle-East in Britain.

And the Prince, a long-standing advocate of dialogue between religions, voiced personal dismay at seeing his work over the last 20 years to “build bridges and dispel ignorance” being deliberately destroyed by those attempting to exploit the Arab Spring for their own ends.


He devoted a Christmas reception for religious leaders at Clarence House to draw attention to the threat Christians have come under in recent months across Egypt, Syria, Iraq and other parts of the region.

In a calculated display of unity, he delivered his comments flanked by Prince Ghazi of Jordan and joined by the Archbishop of Canterbury, the Most Rev Justin Welby, the Roman Catholic Archbishop of Westminster, the Most Rev Vincent Nichols and the Chief Rabbi, Ephraim Mirvis.

It came at the end of a day in which he heard vivid personal testimony from Middle Eastern Christians who have fled to the UK as he visited the London cathedral of the Syriac Orthodox Church and the Coptic Orthodox Church centre in Stevenage, Herts.

Clerics spoke of a new era of “martyrs” as one Syrian man clasped his hands together pleading with the Prince for help. Another showed him mobile phone pictures of the destruction in his own village.

In his address the Prince urged Christians, Muslims and Jews to unite in “outrage” as he warned that the elimination of Christianity in much of the region in which it developed would be a “major blow to peace”.

“I have for some time now been deeply troubled by the growing difficulties faced by Christian communities in various parts of the Middle East,” he said. “It seems to me that we cannot ignore the fact that Christians in the Middle East are increasingly being deliberately targeted by fundamentalist Islamist militants.”

In a reference to the Christmas story, he added: “Christianity was literally born in the Middle East and we must not forget our Middle Eastern brothers and sisters in Christ.

“Their church communities link us straight back to the early church as I was reminded by hearing Aramaic, our Lord's own language spoken and sung just a few hours ago.

“Yet today the Middle East and North Africa has the lowest concentration of Christians in the world - just four per cent of the population and it is clear that the Christian population has dropped dramatically over the last century and is falling still further.

“This has an effect on all of us, although of course primarily on those Christians who can no longer continue to live in the Middle East.

“We all lose something immensely and irreplaceably precious when such a rich tradition dating back 2,000 years begins to disappear.”

Speaking personally, he added: “For 20 years I have tried to build bridges between Islam and Christianity and to dispel ignorance and misunderstanding. “The point though surely is that we have now reached a crisis where the bridges are rapidly being deliberately destroyed by those with a vested interest in doing so.

“This is achieved through intimidation, false accusation and organised persecution including upon Christian communities in the Middle East at the present time.”

Prince Ghazi emphasised the importance of Christianity to the Arab world. “Christians were present in the Arab world 600 years before Muslims,” he said. “Indeed, Arabs were perhaps the first non-Hebrew Christians in the world, and became Christians during Jesus Christ’s own lifetime.”

While the Government's Minister for Faith and Communities Baroness Warsi insists that the persecution and eradication of Christians in the Middle East has absolutely nothing to do with Islam, the Prince of Wales has exposed the lie.

While the Noble Baroness asserts quite vehemently that such persecution is "mostly the work of extremists who do not follow any faith", Prince Charles tells it like it is: he terms them (somewhat tautologically) "fundamentalist Islamist militants".

Certainly, the Islamist may not be the Baroness's preferred sort of Muslim expressing her preferred interpretation of Islam, but the Prince of Wales does not sweep the matter under the carpet, as the Baroness prefers to do, by seeking to divorce the systematic 'cleansing' of Christians in the Middle East from the virulent strain of Islamic theology which inspires and feeds it.

Prince Charles is clearly aware - while the Baroness apparently is not - that there is a vastly influential school of thought within Islam which believes that the only truly devout Muslim is a fundamentalist one.

This particular strain - the Wahhabi-Salafist school which is spreading like a plague through Syria, Iraq, Iran, Lebanon and Egypt, infecting many hundreds of thousands, if not millions of the Baroness's co-religionists ("who do not follow any faith") - believes 'jihad' to be a struggle for the glory of Allah to the death against the apostate, blasphemer and non-believer - the kuffar - who are lower than pigs but not quite as low as the Jews.

Ruth Gledhill has the story for The Times. The sub-ed title is provocative (journalists rarely write their own, though they are invariably blamed for them): the Prince of Wales didn't quite say that Islam is to blame, but he did say:

“For 20 years, I have tried to build bridges between Islam and Christianity and to dispel ignorance and misunderstanding. The point though, surely, is that we have now reached a crisis where the bridges are rapidly being deliberately destroyed by those with a vested interest in doing so, and this is achieved through intimidation, false accusation and organised persecution, including to Christian communities in the Middle East at the present time.”

Building bridges is a laudable objective: "Blessed are the peacemakers, for they shall be called the children of God." At this time of the year, it is right to acknowledge all those who work tirelessly for peace, reconciliation and mutual understanding, of which the Prince of Wales is a leading and increasingly influential figure.

We have often heard him speaking up on behalf of British Muslims, but here he is raising the profile of the appalling plight of Christians in the Middle East - his "brothers and sisters in Christ", as he calls them. And here is just one account of the horrific reality of their present suffering:

What happened in Sadad is the most serious and biggest massacre of Christians in Syria in the past two years and a half. 45 innocent civilians were martyred for no reason, and among them several women and children, many thrown into mass graves. Other civilians were threatened and terrorized. 30 were wounded and 10 are still missing.

For one week, 1,500 families were held as hostages and human shields. Among them children, the elderly, the young, men and wome. All the houses of Sadad were robbed and property looted. The churches are damaged and desecrated, deprived of old books and precious furniture. What happened in Sadad is the largest massacre of Christians in Syria and the second in the Middle East, after the one in the Church of Our Lady of Salvation in Iraq, in 2010.

Archbishop Selwanos Boutros Alnemeh, Syriac Orthodox Metropolitan of Homs and Hama, pleads with us: “We have shouted aid to the world but no one has listened to us. Where is the Christian conscience? Where is human consciousness? Where are my brothers? I think of all those who are suffering today in mourning and discomfort: We ask everyone to pray for us.”

At least your brother the Prince of Wales has heard.

Ms Gledhill notes that Prince Ghazi bin Muhammad, chief adviser for religious and cultural affairs and personal envoy of King Abdullah II of Jordan, acknowledged the Prince of Wales's record in defending Muslims, and now the need for reciprocity: “Since Muslims can generally live in dignity in Christian-majority countries, they must stand for the dignity of Christians in Muslim-majority countries.”

“Everywhere else in the Middle East Christians are wondering what the rise of these movements, and of politicised Islam in general, means for their future,” the Prince added.

Both Prince Charles and Prince Ghazi present Baroness Warsi with an unpalatable truth: 'Political Islam' is an undoubted expression of Islam, not an ideology of those "who do not follow any faith". Of course, all religions have their intolerant sects and extremists - both violent and peaceful - but fundamentalist zealotry is not overcome by turning a blind eye to theological distortion or by deflecting from the fons et origo of their evil acts.

'Political Islam' contends that Islam possesses a theory of politics and the state, and we see that this theory is somewhat at odds with modernity. It is unsurprising that Muslim political activism has become synonymous with terrorism when so little media attention is dedicated to those who seek to relate their religion to contemporary social concerns - ie to contextualise it in the light of modern sociopolitical notions of justice, human rights and liberal democracy.

The Islamist tends to want the whole of society to revert to the Mecca of AD 610 or, more accurately, the Medina of 622: in this context, the rest of us simply become dhimis, while the practices and principles of 'the Prophet' regulate society with a distinct Muslim polity, including the struggle - jihad - for defence, survival and dominance.

We must thank God that the Prince of Wales has taken up the cause of persecuted Christians across the Middle East: it is, quite literally, an answer to the prayers of millions, for when Prince Charles gets a bee in his bonnet about an issue, he tends to do more than make a few speeches of agitation.

Thank God he is alive to the reality that many Muslim countries harbour extremists and intolerant fanatics who believe it is their duty (and the will of Allah after the example of Mohammed) to slaughter the infidel Christians. Of course, some of these Islamists now dwell among us: it is perhaps only a matter of time before we begin to taste some of this “organised persecution” ourselves - if, indeed, the infection is not already coursing through the arteries of our liberal, tolerant and accommodating multicultural relativism. 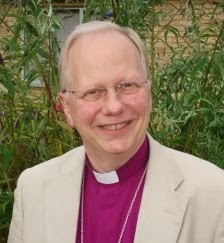 (His Grace Archbishop Cranmer takes as his inspiration the words of Sir Humphrey Appleby: ‘It’s interesting,’ he observes, ‘that nowadays politicians want to talk about moral issues, and bishops want to talk politics.’ It is the fusion of the two in public life, and the necessity for a wider understanding of their complex symbiosis, which leads His Grace to write on these very sensitive issues.


"It hath been found by experience that no matter how decent, intelligent or thoughtful the reasoning of a conservative may be, as an argument with a liberal is advanced, the probability of being accused of ‘bigotry’, ‘hatred’ or ‘intolerance’ approaches 1 (100%).”)

Related posts at following links:
Christian Priest Beheaded Alive by Islamists in Syria
Posted by Hla Oo at 10:39 AM