Shin Wirathu: Suu Kyi Presidency Will Be Bad For Burma 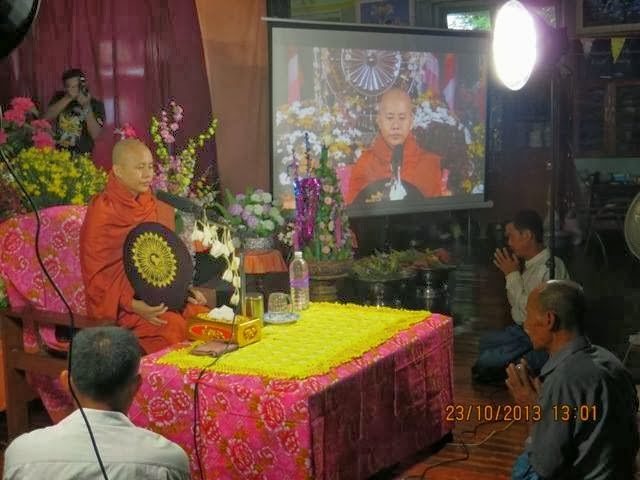 Irrawaddy telephoned nationalist Buddhist monk Shin Wirathu at New-Masoeyein Teaching Monastery in Mandalay yesterday and asked him directly about the recent news of him preaching all over Burma that NLD Chairman Aung San Suu Kyi should not be the president of Burma after 2015 General Elections.

In following phone interview Shin Wirathu explained to Irrawaddy’s Sanay Lin that he was basically preaching for the protection of Burmese Race and Buddhist Religion and not explicitly about whether Suu Kyi should not become the president in 2015.

“If Daw Suu’s late husband were a Burmese national she wouldn’t be facing the problems she is now. Past military governments wouldn’t be able to attack her on that point and she also wouldn’t need to fight to amend the 59-F like she is doing all over now,”  said Shin Wirathu.


(Sub-act 59-F of the military-drawn 2008 Constitution basically prohibited any Burmese national with a foreigner spouse from becoming a president of Burma. Aung San Suu Kyi’s late husband Michael Aris was a British national and ASSK was widely believed to have once held a British citizenship while she was living and raising her young family in UK.)

Question: Both U Shwe Mann (Parliament’s Speaker) and ASSK are openly talking about their presidential ambitions for 2015. We still do not know of President U Thein Sein’s intention for next term and what are your opinions on all that?
Answer: If all three are contesting for 2015 presidency my first choice is U Thein Sein. If he refuses to participate in 2015 I would like to choose U Shwe Mann. That doesn’t mean that I don’t like Suu Kyi at all.  But she has both weakness and strength.

Her strength obviously is her life-long sacrifices for her people. On that point both President and U Shwe Mann are well below her. She had waged a revolution. She had a revolutionary spirit. Just for that reason alone she was considered as a national hero.

But her weakness is her lack of experience in governing a nation like ours. She hardly knows Burma and the peculiarities of our nation. She only knows revolution and how to attack the government. If she becomes the president we will have disruptive chaos in this country.

The present racial and religious riots will be occurring much more than now. People who do not like her now and who are already against her will rise up against her weak administration. I would have accepted her as our president out of three contenders if she knows our country well.  But she does not, at all.

Question: What do you think of the basic concept that she must not be our president since she married to a foreigner (a British national) and she has two foreigner sons?
Answer: When she first started calling to amend the constitution she sounded like she wanted to change the constitution just for her alone to become president as her British husband has been dead for a while now. But it seems like she is now fighting for her next generation too and allowing foreign aliens to be eligible for president. If she changes her position I wouldn’t mind her at all.

Question: What we are hearing now is that you’re preaching in your Dammah sermons that Daw Suu shouldn’t become president. Do you want to comment on that?
Answer: I do not preach of Daw Suu not to become a president. I’m just telling our people about our Ah-myo-zount (protection of our race) Act. If Daw Suu’s husband wasn’t a foreigner she wouldn’t even be attacked constantly by the military government for marrying a foreigner. The Constitution’s 59-F does not even need to be changed. She would easily become a president.

Just because of her failure to maintain her race she is now being criticised by most our women folks, almost assassinated by the Kyant-Phut (USDP) in Depayin, repeatedly attacked by the military government, and desperately fighting to amend the Constitution in the parliament. I’m just preaching on that.

I would support her if she could become a really reliable president protecting our race, religion, and our culture. Same principle applies to both U Thein Sein and U Shwe Mann. But if he or she is a poison to our race and religion and not willing to protect our race and religion we will never accept him or her, period.

One thing our people urgently need now is this Ah-myo-zount Act. So far more than 4 million people have signed the public petition for this act. There are more people willing to sign but we couldn’t include them as we had to submit the petition to the parliament urgently and we did.

Right now many parliament members like Daw Suu are refusing to make this proposal a law and basically abandoning his or her constituents by ignoring their demands. If Daw Suu stops neglecting people and starts making this proposal a law of this land she could become a president. We even dare ourselves to put up her statue and worship her.

Question:  So what were the responses and comments from your audiences on you using Daw Suu as a bad example for not protecting her race and religion?
Answer: Paradigm is now shifted. After all those race riots and Bengali-Muslim troubles in Arakan our people are not respecting her as much as before. Their confidence on her as a leader is rapidly deteriorating. They are now fully supporting what I have been saying for a while.

Question: You being a Buddhist monk and at the same time attacking Daw Suu by using her as an example of loose Burmese women who betrayed her race and married a foreigner is being criticised by some. Do you want to say anything on that?
Answer: We’re just preaching according to our Buddhism. Lord Buddha himself had always preached to preserve one’s race and religion and culture. And whenever our Lord Buddha delivered a sermon he always used what was actually happening during that time as example.

So what we are doing now is actually in conformance with Lord Buddha’s teachings and Buddhism. Thus if
some people want to criticize and condemn us for what we are doing that is their personal affairs and we could easily forgive them and also ignore them.

Nobody is pulling strings behind me. Nobody is asking me to knock Aug San Suu Kyi off 2015 general elections. Nobody is ordering me to do what I’ve been doing. I have my own believes, my own principles, and my own standing.

(Blogger's Notes: In his sermon delivered on December-11 at Kyauk-myaung-gyi Ward in Tamwe Township Shi Wirathu pointed out to his Buddhist-Burmese audience that there were more than 100 complaints directly to him of serious and troubling mistreatments of Buddhist women and girls by Muslims during two years period from 2012 to 2013 so far.

According to Shin Wirathu most of those mistreatment cases were sexual-kidnapping of under-aged Burmese-Buddhist girls, rapes of young women, forceful conversion to Islam, and brutal torture of domestic maids in Muslim households.

“These mistreatment cases of our Buddhist women and girls have been happening all over our country. I have been keeping the detail record of all these complaints and so far the cases total has reached more than 100 within last two years,”  said Shin Wirathu in his sermon.

Security was unusually tight for that Buddhist ceremony and all the backpacks are other bags were searched by local police detachment assigned there for Shin Wirathu’s personal protection.

Unlike his Buddhist sermons delivered  before during his tour in countryside like Kachin State and Shan State our Shin Wirathu didn’t include his negative remarks on Aung San Suu Kyi in his sermons delivered so far in his Rangoon tour as if he didn’t want to incite media and opposition politicians anymore.)