(Raymond Bonner’s article from The NEW YORK TIMES on 27 January 1982.)

Massacre of Hundreds Reported in Salvador Village: From interviews with people who live in this small mountain village and surrounding hamlets, it is clear that a massacre of major proportions occurred here last month.

In some 20 mud brick huts here, this reporter saw the charred skulls and bones of dozens of bodies buried under burned-out roofs, beams and shattered tiles. There were more along the trail leading through the hills into the village, and at the edge of a nearby cornfield were the remains of 14 young men, women and children.

In separate interviews during a two-week period in the rebel-controlled northern part of Morazan Province, 13 peasants said that all these, their relatives and friends, had been killed by Government soldiers of the Atlacatl Battalion in a sweep in December.

The villagers have compiled a list of the names, ages and villages of 733 peasants, mostly children, women and old people, who they say were murdered by the Government soldiers. The Human Rights Commission of El Salvador, which works with the Roman Catholic Church, puts the number at 926.

A spokesman for the Salvadoran armed forces, Col. Alfonso Cotto, called the reports about ''hundreds of civilians'' being killed by Government soldiers ''totally false.'' Those reports were fabricated by ''subversives,'' he said.


It is not possible for an observer who was not present at the time of the massacre to determine independently how many people died or who killed them. In the interviews, the peasants said uniformed soldiers, some swooping in by helicopters, did the shooting. The rebels in this zone are not known to wear uniforms or use helicopters. 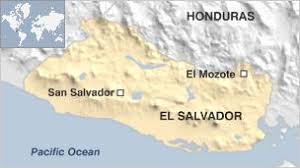 ''It was a great massacre,'' 38-year-old Rufina Amaya told a visitor who traveled through the area with those who are fighting against the junta that now rules El Salvador. ''They left nothing.'' Somewhere amid the carnage were Mrs. Amaya's husband, who was blind, her 9-year-old son and three daughters, ages 5 years, 3 years and 8 months.

Mrs. Amaya said she heard her son scream: ''Mama, they're killing me. They've killed my sister. They're going to kill me.'' She said that when the soldiers began gathering the women into a group, she escaped and hid behind some trees in back of the houses.

From Dec. 8 to Dec. 21, according to Salvadoran newspapers, soldiers from the Atlacatl Batallion took part in a sweep through Mozote and the surrounding mountain villages as part of one of the largest search-and-destroy operations of the war against the leftist guerrillas who are fighting to overthrow the United States-supported junta. According to the villagers, no Americans accompanied the troops on the sweep.

Asked whether the Atlacatl Battalion had been involved in an operation in the northern mountainous region of Morazan in December, Col. Cotto said he could not provide specific details about military operations.

''We have been at war since 1979 against the subversives,'' he said. As part of that war, he said, air force and army units, including the Atlacatl Battalion, are continually conducting operations throughout the country. 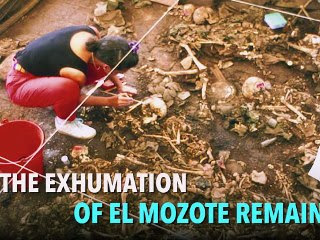 In Mozote, 280 of the 482 peasants killed, according to the list the villagers have prepared, were children under 14 years old. In Capilla, vill agers say the soldiers murdered a father and his nine children, a m other and her five; in Cerro Pando, 87 adults and 62 children.

The Human Rights Commission has at other times also charged the army with killing large numbers of civilians during its operations. According to the commission, more than 100 were killed in the northern part of the province of Cabanas in November; 143, including 99 children under 16 years old, were said to have been killed in San Vicente in October, and about 300 in Usulutan in September.

Under banana trees at the edge of a cornfield near this village were 14 bodies. A child of about 5 or 6 years old was among the heap. Spent M-16 cartridges littered the dirt about 15 to 20 feet from the bodies. The rebels do have some M-16 rifles captured from army units, and they are standard issue for the Atlacatl Battalion.

A few peasants, handkerchiefs or oranges pressed against their noses to help block the stench, poked among the rubble for anything salvageable. Up the mountain trail a short distance, 12 recently cut wood planks about 10 inches by three-eighths of an inch by 12 feet were propped against the trees. 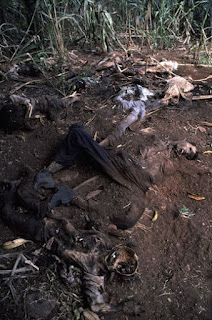 On the patio of the adobe hut, saws and crude homemade machetes and hammers were stained with blood. Inside, five skulls were strewn among the smashed tiles. The men were carpenters, according to a boy who was working among beehives behind the mud hovel.

Mrs. Amaya said the first column of soldiers arrived in Mozote on foot about 6 P.M. Three times during the next 24 hours, she said, helicopters landed with more soldiers. She said the soldiers told the villagers they were from the Atlacatl Battalion. ''They said they wanted our weapons. But we said we didn't have any. That made them angry, and they started killing us.''

Many of the peasants were shot while in their homes, but the soldiers dragged others from their houses and the church and put them in lines, women in one, men in another, Mrs. Amaya said. It was during this confusion that she managed to escape, she said.

She said about 25 young girls were separated from the other women and taken to the edge of the tiny village. She said she heard them screaming. ''We trusted the army,'' Mrs. Amaya said when asked why the villagers had not fled. She said that from October 1980 to August 1981, there had been a regular contingent of soldiers in Mozote, often from the National Guard. She said that they had not abused the peasants and that the villagers often fed them.

Rebel leaders in this region said Mozote was not considered a pro-rebel village. But the guerrillas did say that 3,000 of their supporters had fled the area when the army came in.

When the soldiers and helicopters began arriving in the village of La Joya, the older boys and men fled, said 46-year-old Cesar Martinez. ''We didn't think they would kill children, women and old people, so they remained,'' he explained.

On the wall of one house, Mr. Martinez said the soldiers scrawled ''the Atlacatl Battallion will return to kill the rest.'' Sitting next to Mr. Martinez as he talked was 15-year-old Julio. Julio said his mother, father, 9-year-old brother and two sisters, ages 7 and 5 years, had been killed by the soldiers in La Joya.

He said that when he heard the first shooting, he ran and hid in a gulley. Julio said that he has returned to his village once since the massacre, to bury his family and two of his friends, ages 7 and 10 years. 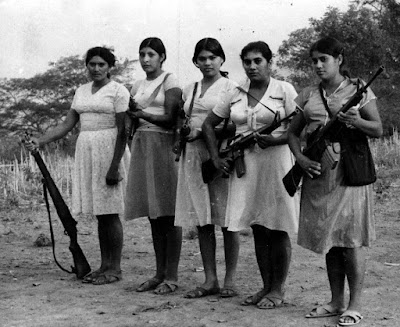 Whether to Learn or Fight

Julio has never been to school, and unlike many boys his age in this area, he had not been involved in the revolutionary movement. Now he is confused: He doesn't know whether to attend the school for children that is operated by the guerrillas or learn to use a rifle so ''I can fight against the enemy,'' he said.

Another La Joya peasant, 39-year-old Gumersindo Lucas, said that before he fled with his wife, children and other relatives, he took his 62-year-old mother, who was too sick to walk, to a neighbor's house and hid her under some blankets. He said the soldiers shot her there and then burned the house.

The massacre occurred in the midst of a conflict in El Salvador that became a singular focus of Washington’s battle against communism in the final decade of the Cold War. As soon as President Ronald Reagan took office in January 1981, he increased military aid and sent Special Forces instructors to El Salvador, whose army was fighting the leftist guerrillas of the Farabundo Martí National Liberation Front, or the F.M.L.N.

In December of that year, the Salvadoran army began a campaign to flush out insurgents from the northern hills of eastern Morazán province. According to accounts by a United Nations truth commission and a later ruling by the Inter-American Court of Human Rights, the operation began with an aerial and artillery bombardment of El Mozote before the soldiers marched in on Dec. 10 and began interrogating villagers about the guerrillas.

The following morning, they ordered everyone into the town square, separating the men and women, and shoving the children into a small building known as the convent alongside the village church. Throughout that day, the soldiers methodically executed everyone in the village. They killed the children last, firing a barrage of bullets into the convent and then setting it aflame.

An exhumation more than a decade later found the remains of at least 143 victims in that building. The average age was 6. The same day, the soldiers continued on to La Joya, a hamlet tucked along a valley, where they hauled people out of their homes, shot them and set fire to their houses.

On the afternoon of December 10, 1981, units of the Salvadoran army's Atlacatl Battalion, which was created in 1980 at the U.S. Army's School of the Americas, arrived at the remote village of El Mozote after a clash with guerrillas in the vicinity.

The Atlacatl was a "Rapid Deployment Infantry Battalion" specially trained for counter-insurgency warfare. It was the first unit of its kind in the Salvadoran armed forces and was trained by United States military advisors. Its mission, Operación Rescate ("Operation Rescue"), was to eliminate the rebel presence in a small region of northern Morazán where the FMLN had two camps and a training center.

El Mozote consisted of about 20 houses on open ground around a square. Facing onto the square was a church and, behind it, a small building known as "the convent," used by the priest to change into his vestments when he came to the village to celebrate Mass. Near the village was a small schoolhouse.

Upon arrival, the soldiers found not only the residents of the village but also campesinos who had sought refuge from the surrounding area. The soldiers ordered everyone out of their houses and into the square. They made people lie face down and searched them and questioned them about the guerrillas.

They then ordered the villagers to lock themselves in their houses until the next day and warned that anyone coming out would be shot. The soldiers remained in the village during the night. 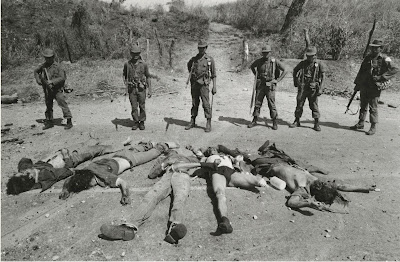 Early the next morning, the soldiers reassembled the entire village in the square. They separated the men from the women and children and locked them in separate groups in the church, the convent, and various houses.

During the morning, they proceeded to interrogate, torture, and execute the men in several locations. Around noon, they began taking the women and older girls in groups, separating them from their children and machinegunning them after raping them.

Girls as young as 10 were raped, with soldiers reportedly heard bragging how they especially liked the 12-year-old girls. Finally, they killed the children at first by slitting their throats, then by hanging them from trees, with one child as young as two years old. After killing the entire population, the soldiers set fire to the buildings.

The soldiers remained in El Mozote that night but, the next day, went to the village of Los Toriles and carried out a further massacre. Men, women, and children were taken from their homes, lined up, robbed, and shot, and their homes then set ablaze. 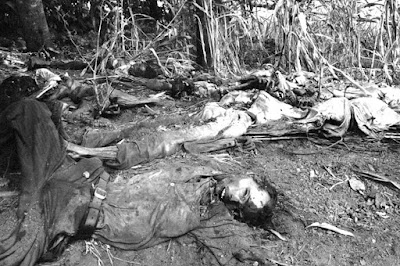 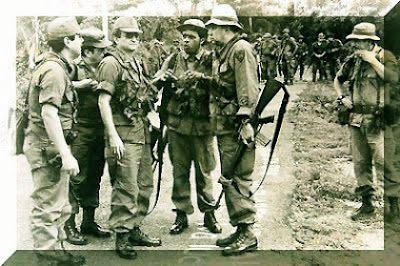