(Staff articles from The FOX NEWS & GOTHAMIST in February 2019.) 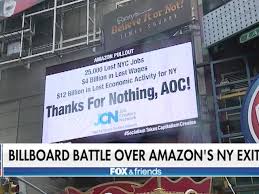 Ocasio-Cortez (D-N.Y.), elected in November, was one of the most outspoken opponents of the new headquarters, but the president/CEO of the group said Monday that Ocasio-Cortez's actions are troubling to many New Yorkers.

In response to the billboard, Ocasio-Cortez called it "wack" and alleged it was funded by "dark money" from billionaires. "Few things effectively communicate the power we've built in fighting dark money & anti-worker policies like billionaire-funded groups blowing tons of cash on wack billboards," she tweeted.

He said he's been surprised to see the amount of emails and online messages he's gotten from Democrats in New York and California who do not agree with the direction of the party. Ortiz said it's "kind of scary" that President Trump actually needed to state that the United States will "never be a socialist country" in his State of the Union address.

"I don't want to attack AOC in particular but her ideals and principles could completely destroy our economy. Look at Venezuela. ... We don't want that for this country," he said. Watch the "Fox & Friends" segment below.

Conservative media folks like to talk a lot about "Trump Derangement Syndrome," which as Psychology Today explained, is the notion that "the everyday activities of President Trump trigger some people into distorted opinions, extreme emotions and hysterical behaviors." (They note that it is not an official diagnosis or mental condition, so thanks for that.)

Such is the situation for the shadowy conservative group Job Creators Network: earlier this week, they erected a billboard in Times Square sarcastically thanking AOC for tanking the Amazon deal she had nothing to do with.

AOC was unfazed by the attack, and as is her wont, tweeted back at the group for their "wack" billboard: "Billionaires paying to put up anti-progressive propaganda in Times Square is like the obscenely rich version of the scene where Michael Scott points to the Bubba Gump and saying 'This is it, this is the heart of civilization, right here.'" she tweeted. 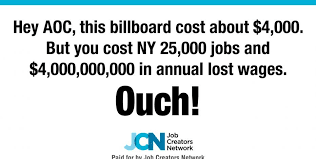 Normally in this situation, a group like this might cut their losses and move on to influencing elections, or gerrymandering, or advocating for billionaire rights—but because AOC was involved, they clearly felt a pressing need to respond.

But not with a tweet or a press release or any sort of normal means of communication in the 21st century, but rather by paying to put up TWO more billboards in Times Square at the intersection of 7th Avenue and 42nd Street.

As you can see up above, the first one states, "Hey AOC, Saw your wack tweet," which is unbelievably dumb since AOC will never actually see it in person as it will only be up for a week and she lives in D.C., and also who the fuck goes to Times Square unless they absolutely have to, and even if they do, what kind of New Yorker is walking around with their head tilted toward the sky in order to better absorb all those sweet giant Coca-Cola messages?

But I digress: the second billboard underneath claims that while the billboards only cost $4K each (which, honestly, is somewhat hard to believe), AOC allegedly cost the city over $4 billion in annual wages.

"She can call us out all she wants about how we spend our money, but it’s clear that most people care more about how she spends theirs," said Alfredo Ortiz, JCN President and CEO, in a statement.

AOC hasn't tweeted in response to the latest billboards, but she did sent out a tweet to clarify about who is backing the Job Creators Network. The Mercers founded the related group, the Job Creators Alliance, which Media Matters claims is actually the same group with a slight name change, though others have connected the Jobs Creator Network with notorious corporate lobbyist Richard Berman, also known as "Dr. Evil." 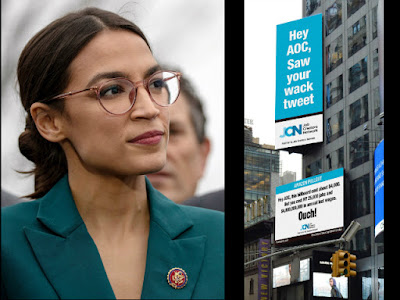 After a conservative business advocacy group blamed Ocasio-Cortez for 25,000 lost jobs and $US4 billion in lost wages as a result of Amazon’s cancellation of its Long Island City HQ2, a progressive group hit back with another billboard. “Fighting gentrification in NYC, helping to stop a $US2.8 billion tax give-away, taking on the world’s 3rd largest corporation, thanks AOC!” the Democracy for America ad read.

A feud playing out on Manhattan billboards escalated on Friday after a progressive group put up its own ad defending Rep. Alexandria Ocasio-Cortez’s opposition to Amazon’s planned New York headquarters.

The public fight began when the Job Creators Network, a conservative business advocacy group, put up a billboard in Times Square blaming Ocasio-Cortez for 25,000 lost jobs and $US4 billion in lost wages as a result of Amazon’s cancellation of its Long Island City HQ2. “Thanks for Nothing, AOC!” read the ad, which was placed in a tourist-heavy spot.

Ocasio-Cortez hit back at JCN in a series of tweets on Thursday in which she called the attack “wack” and said the group does the bidding of the pro-Trump billionaires it’s funded by. The 29-year-old also argued that JCN’s campaign is proof of how effectively she and her allies are “fighting dark money & anti-worker policies.”

JCN was founded by Bernard Marcus, a billionaire who donated to Donald Trump’s 2016 presidential campaign. And the billionaire Mercer family, who also donated to Trump’s campaign and funded the conservative news site Breitbart, have donated to a related group, the Job Creators Alliance. JCN didn’t relent, putting up two more billboards on Thursday, one of which read, “Hey AOC, saw your wack tweet.”

On Friday morning, progressive political action committee Democracy for America jumped into the fight, putting up its own Times Square billboard defending Ocasio-Cortez. “Fighting gentrification in NYC, helping to stop a $US2.8 billion tax give-away, taking on the world’s 3rd largest corporation, thanks AOC!” the ad read.

Ocasio-Cortez was an outspoken opponent of Amazon’s HQ2 deal, but local lawmakers and activists led the pushback to the plans. The tech company was set to receive nearly $US3 billion in tax incentives from the city and the state and said it would create 25,000 jobs for New Yorkers over the next decade. Amazon cited the resistance of local politicians in a blog post announcing the cancellation. 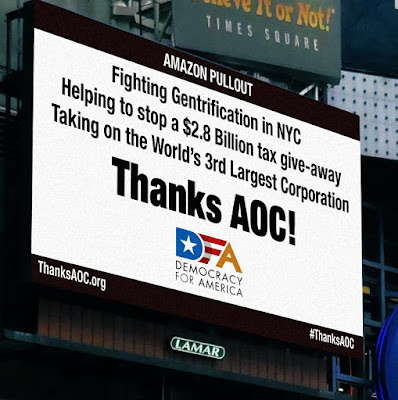 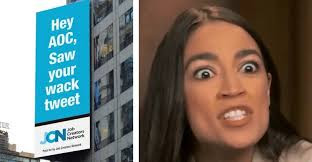