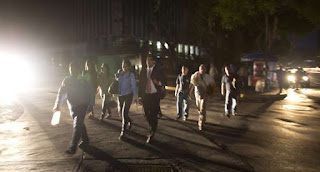 "A major power outage hit crisis-stricken Venezuela on Thursday, according to Reuters ... a problem the government of President Nicolas Maduro quickly blamed on "sabotage" at a hydroelectric dam that provides much of the country's power."

National life ground to a standstill, telecommunications -- including the internet -- stopped working, hospitals were plunged into darkness and cities of millions lay helpless without electricity.

As the outage continued into Friday spreading to every Venezuelan state, it became clear this was going to become the biggest of the blackouts yet and Maduro's officials increasingly pointed a finger at the United States.  But the national electric grid had also been teetering for a long time.


"Crumbling infrastructure and lack of investments have hit Venezuela’s power supply for years." Outages had become a way of life and there was no easy way of proving this wasn't "sabotage" but only more of the same dysfunction.

The government has blamed the outages on a variety of things — including pesky animals. In an Oct. 20 tweet, Energy Minister Luis Motta Dominguez named “rats, mice, snakes, cats, squirrels” as possible culprits in shorting out lines. He added: “In the list of animals mentioned above, of course iguanas are included.”

Critics, however, say insufficient investment by the government is the cause, following the 2007 nationalization of the electricity sector. There was nevertheless circumstantial evidence for deliberate human action. For one thing, Maduro himself had long embarked on cyber attacks against his political enemies.

Twitter image and video servers and platform backends have been blocked in Venezuela from 3:10 PM UTC on state provider CANTV (AS8048) and its mobile network Movistar, as interim leader Juan Guaidó is set to arrive in Caracas after a tour of neighboring countries.

The restrictions have been implemented as the leader calls supporters to the streets under the hashtags #4MVzlaALaCalle, #VamosVzla and #VamosJuntosALaCalle," according to Netblocks, a site which monitors network suppression throughout the world.

Maduro had been suppressing opposition YouTube channels also. "YouTube has been restricted by Venezuela’s state-run internet provider CANTV (AS8048) for over twenty hours, according to current network measurements from the NetBlocks internet observatory. Incident timings indicate a start time coinciding with live broadcasts from the country’s National Assembly on Wednesday."

One might speculate that Maduro had Russian help in crafting these attacks.  After all, the Kremlin was reported to have taken down Ukraine's power grid in 2015 and 2016 and might reasonably be supposed to know something about cyberwarfare.

The researchers describe that malware, which they’ve alternately named "Industroyer" or "Crash Override," as only the second-ever known case of malicious code purpose-built to disrupt physical systems. The first, Stuxnet, was used by the US and Israel to destroy centrifuges in an Iranian nuclear enrichment facility in 2009.

Given his own guilt, Maduro would probably expect turnabout. Who knows but that even now Russian engineers are looking over the Venezuelan grid for signs that Kilroy was there?  But although there's a natural human tendency to ascribe dramatic developments to conspiracy, it's possible to overstate it. Most of the damage to the Venezuelan power grid was indisputably caused by the mismanagement of Chavez and Maduro.

They weakened it to the point of fragility.  To paraphrase John le Carre, "the Bolivarian knight was dying in his armor." All that remained was to knock it over with a feather. Socialism almost never loses to human agency.

It's too good at propaganda and repression to be beaten easily by men. What kills it nine times out of ten, if one will pardon the expression, is God. Financial collapse, famine, pandemic, hyperinflation do most of the work. Cyber Command -- or iguanas -- do the rest.

Yet the Venezuelan blackout also provides a lesson in how vulnerable modern societies are to disruption.  There was a lot more self-sufficiency 150 years ago when people lived off the grid. Today, much of the world depends on systems of hideous complexity to get food, water, and power and would be sore-pressed to live without it. Then some, like Venezuela, will put socialists in charge of this complex infrastructure. What could go wrong? 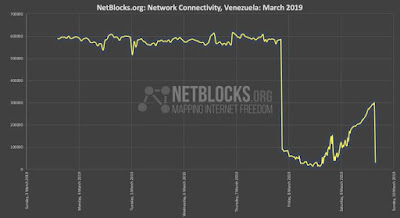 Internet Collapses in Venezuela with 80% Offline

Internet Collapses in Venezuela with 80% Offline; Twitter, YouTube, SoundCloud Blocked: In the midst of a second nationwide power outage in Venezuela, the vast majority of the country is engulfed in a massive internet outage.

The first electrical blackout, which swept across the nation on Thursday, left Venezuela with only two percent connectivity amid the ongoing presidential crisis. Most of the country has been offline since Thursday with limited or no connectivity being reported across large swaths of the South American nation.

The NetBlocks Group, a private internet watchdog organization based in the UK, reported on Saturday that 96 percent of the country was offline: Gains in connectivity have been lost through a series of three distinct new outages as shown in NetBlocks’ network connectivity charts.

Internet-scale network measurements indicate which regions have been affected and to what extent. During previous network and power outages, concerns have been raised about attacks and military activity, and the risk of human rights violations perpetrated under the cover of darkness.

The chart below shows a precipitous drop in internet connectivity on Thursday with a partial recovery on Saturday followed by another large drop on Sunday. On March 4, NetBlocks reported that the Venezuelan government had blocked YouTube and SoundCloud and partially blocked Twitter. 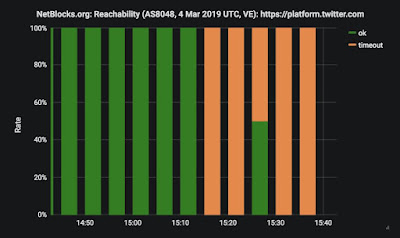 “Twitter image and video servers and platform backends have been blocked in Venezuela from 3:10 PM UTC on state provider CANTV (AS8048) and its mobile network Movistar, as interim leader Juan Guaidó is set to arrive in Caracas after a tour of neighboring countries,” the organization explained.

“The restrictions have been implemented as the leader calls supporters to the streets under the hashtags #4MVzlaALaCalle, #VamosVzla and #VamosJuntosALaCalle.”

On March 7 the group reported that "YouTube has been restricted by Venezuela’s state-run internet provider CANTV (AS8048) for over twenty hours, according to current network measurements from the NetBlocks internet observatory." Netblock said that the restrictions coincided with live broadcasts from the National Assembly the day before. The group warned that the internet outage “is likely to have had a significant and lasting impact on Venezuela’s ailing economy.”

“A study by Venezuelan daily Efecto Cocuyo in December using the NetBlocks and Internet Society Cost Of Shutdown Tool calculated that a total outage of connectivity alone would cost the economy more than 400 million US dollars per day,” said NetBlocks. “The impact for the present incident is likely to be even higher given the impact of power outages on industry and non-digital economies.”

On Saturday, Guaidó and Nicolas Maduro — whose disputed re-election in May has been widely delegitimized by the international community — held dueling rallies in the capital city of Caracas. Maduro, an anti-American conspiracy theorist, blamed the U.S. for the blackout, insisting that the electrical grid had been “hacked” and “sabotaged.”

He claimed, without providing evidence, that an “international cyber-attack” carried out by the U.S. government and opposition forces was to blame for the ongoing outages. “The electrical warfare announced and directed by the imperialist United States against our people will be defeated,” Maduro tweeted Friday. “I call for maximum unity patriots!” He vowed to “clean” Venezuela's state-run electric company to get rid of "traitors" and "infiltrators."

The internet outages come at a critical moment for Guaidó, as he attempts to rally opposition forces to oust Maduro. “Such measures are known to be used by authorities to prevent the sharing of media from protests,” NetBlocks said.

Guaidó urged his followers on Saturday to remain strong in the face of the current crisis. "We have been reporting the electrical crisis for years, and now, we have to alert in a responsible manner that this could also become the gasoline crisis, in addition to the water crisis we already have," he said.

U.S. Sen. Marco Rubio (R-Fla.), a staunch supporter of the Venezuelan opposition, took to Twitter on Sunday to blast the Maduro regime and highlight the developing humanitarian crisis:

“The crisis inside the country has taken a rapid & catastrophic turn over the last 72 hours. As bad as the humanitarian crisis was before,since Thursday it has become increasingly horrific. We are approaching 72 hours of a nationwide electrical blackout. Already facing growing food shortages,remaining food is spoiling & the prospect starvation is many is now real.

Already facing severe fuel shortages, generator use has further depleted supplies. In the next few hours more generators will stop at hospitals because fuel is running out. Making matters even worse is that internet & cell service makes communications increasingly difficult.

As of 8:30pm last night 17 deaths have been reported in hospitals due to lack of electricity. The true number is higher. Patients on life support,in neonatal ICU have died & more will die in coming hours. Dialysis patients face certain death if they don’t get services soon.

Experts warned for months that years of #MaduroRegime negligence would lead to this collapse of electricity system. And regime does not have the expertise to fix it. If massive amounts of aid isn’t delivered very soon, I fear we are headed for an unprecedented catastrophe.”

As PJM's Rick Moran noted last week, "Events are spiraling toward some kind of climax, which may include military action by regional actors. With Maduro on the ropes, it probably wouldn't take much of a push to get the Venezuelan army to act and depose the tyrant."

Related posts at following links:
Socialism Destroys Venezuela And Will Destroy US Too
Posted by Hla Oo at 12:50 AM