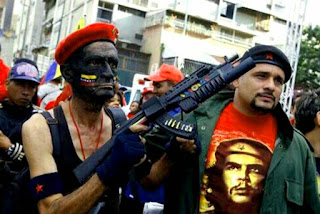 Maduro's muscle - Motorcycle gangs known as 'colectivos' are the enforcers for Venezuela's authoritarian leader: The neighbors were fed up. For days, they'd had no electricity or running water because of a massive national blackout.

So one morning this week, they piled logs and garbage into a makeshift barricade in their middle-class Caracas neighborhood and started yelling slogans against the government. Then came the motorcycles. There were at least 20 of them, their motors buzzing, driven by men with scarves over their faces, according to interviews with 10 witnesses.

The demonstrators scattered. But as people in surrounding buildings started hurling bottles at the bikers, the men raised their weapons - pistols and rifles - and opened fire. No one was injured. But the neighbors were terrified. "Now we can't even protest, because they'll shoot at us," said Delia Arellano, 72, one of the demonstrators.


The attack on Sunday was a chilling sign of how President Nicolás Maduro is increasingly relying on paramilitary groups as he clings to power. This week, he publicly urged the motorcycle-riding "colectivos" to intensify their efforts, as the country teetered on the edge of economic collapse and a U.S.-backed opposition movement pressed for his ouster.

"I call on the colectivos; the hour of resistance has arrived, active resistance in the community," Maduro declared in the speech on Monday. The colectivos aren't nearly as big as Venezuela's armed forces - they number perhaps 5,000 to 7,500 members nationwide, most of them in cities, according to Alejandro Velasco, a history professor at New York University who has studied the phenomenon.

But they help explain how Maduro has remained in power even as the country's economy and poorly maintained power grid have broken down. The paramilitary forces are nimble and committed - and they have an extraordinary ability to sow terror.

Ingrid Maldonado witnessed Sunday's clash between the neighbors and colectivos in Chacao, a business district of apartment buildings, offices and hotels in eastern Caracas. "Before, government repression just meant tear gas," said Maldonado, 49. "Now there are bullets. It's different. You think twice about going out."

The colectivos have their roots in the Cuban-inspired guerrilla forces that battled Venezuela's staunchly anti-communist governments in the 1960s. After that conflict, some former rebels returned to poor neighborhoods determined to spread socialism through community activities - offering classes, showing movies, giving out free bread - and to protect residents from corrupt police.

Under the "Bolivarian revolution" of Hugo Chávez, Maduro's predecessor, the number of these small armed groups grew. Some were permitted to control neighborhoods and run criminal rackets such as drug trafficking and extortion, analysts say. In return, they rounded up votes and provided other political support. 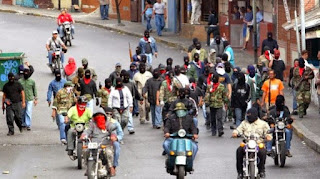 But Chávez, who ruled from 1999 until his death in 2013, was popular. He wasn't as dependent on the colectivos. "He didn't need to use violence," said Rafael Uzcátegui, coordinator of the human rights group Provea. "Chávez could maintain political control of the country."

Maduro, in contrast, is widely reviled for the economic mismanagement that has brought hyperinflation and shortages of food and medicine to this oil-rich nation. "That's why resorting to violence and intimidation has been so important," Uzcátegui said.

Over the past several years, a new kind of colectivo has emerged, composed of current or former police personnel or government bodyguards. Their primary allegiance is not to 'chavismo' or an ideological project or a radical leftist vision of change, but basically to stay in power," Velasco said.

And "power," for colectivos, often means access to government funds or goods. While it is difficult to pin down the groups' exact ties to the state, some have been put in charge of the distribution of government food packages in poor areas - giving them control over hungry neighborhoods. Some might be paid by individuals in the government, analysts say.

The colectivos vary widely in their activities and organization. One group of about 100 black-helmeted riders in dark clothing roars regularly through the colonial center of Caracas, near the Miraflores presidential palace, waving the giant red flags of the ruling Socialist party. They are an intimidating sight - even if they don't flash their weapons.

Others don't hesitate to threaten violence. Recently, a community activist in the poor Caracasneighborhood of La Vega was leaving a meeting about organizing a teachers strike. Armed men on motorcycles roared up and demanded to know what he was doing, said the activist, Jose Gregorio Velásquéz. They warned him against closing off streets for protests. "We know where you live," the men said, according to Velásquéz.

That sort of grass-roots control could discourage poor Venezuelans from joining the protests that have swept the country in recent weeks in support of Juan Guaidó, the opposition leader recognized by the United States and dozens of other countries as the legitimate president. While middle-class Venezuelans turn out, Velasco said, "it's difficult for Guaidó to have the barrios rise up. They are bearing the brunt of the oppression." 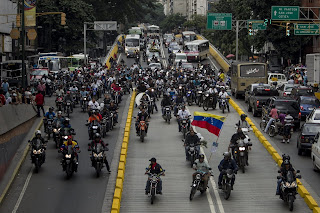 The paramilitary groups are effective in part because they enjoy impunity. While the traditional colectivos were embedded in their communities, many of the newer ones aren't, and it's difficult for citizens to identify their members. They mask their faces, and their motorcycles often lack license plates.

As political instability grows, even bands of car thieves or other criminals are calling themselves'colectivos,' said David Smilde, a Venezuela expert at Tulane University. "They fulfill the classic work of paramilitaries, doing violent security tasks that security agents in uniform would be held accountable for," he said.

Perhaps the colectivos' most important weapon, though, is their ability to sow fear. Roberto Patiño, an opposition activist, helped lead demonstrations on Feb. 23 in the Venezuelan border city of Ureña aimed at pressuring security forces to allow humanitarian aid to cross from Colombia. When the Venezuelan National Guard launched tear gas, he said, the crowd persisted. But then the colectivos turned up, firing their weapons. "Most people fled to save themselves," Patiño said. "There was a high risk of being killed."

The colectivos have become particularly important as the government appears hesitant to use the army to put down demonstrations. While the military leadership has been loyal to Maduro, many rank-and-file soldiers are suffering the same hunger as other Venezuelans - and could defy orders.

The government has also turned to a relatively new branch of the national police, the Special Actions Force (known by its Spanish initials, FAES) to intimidate and kill young protesters in poor neighborhoods, according to human rights groups. Some activists say the new branch works closely with colectivos. The FAES says it is only going after criminals.

The clash in Chacao on Sunday was unusual in that it took place in wealthier East Caracas. Two bakery workers watched as neighbors threw up the barricade across Guaicaipuro Street at the intersection with a major avenue, Francisco de Miranda. At one point, a black government pickup truck tried to pass, the workers said, but the neighbors wouldn't allow it.

About a half-hour later, the colectivo roared up and the protesters scattered. As residents of apartments yelled and tossed bottles at the motorcyclists, the workers said, the leader of the colectivo issued an order: "Let them have it." The motorcyclists opened fire, witnesses said, and eventually dismantled the barricade.

"I don't think the neighbors of Chacao will go out again to protest," said 18-year-old Ricardo Linares, one of the bakery workers. "I'm not afraid to protest," insisted Junaiker Martínez, a 19-year-old co-worker. "It's the only power we have. But I'm not going to go out there alone." 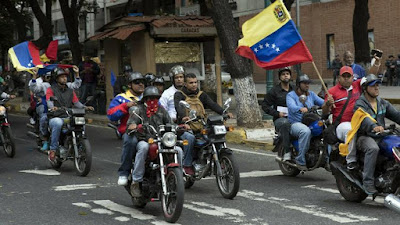 Related posts at following links:
Venezuelan Hell: Socialism Dies In The Darkness
Venezuelan Blackout: No Electricity For Three Days Now
Posted by Hla Oo at 12:45 AM