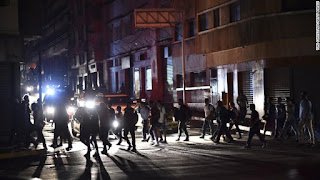 Crowds of commuters in capital city Caracas were walking home after metro service ground to a halt and traffic snarled as cars struggled to navigate intersections where stoplights were out. Most of Venezuela still had no power Friday evening, more than 20 hours after a massive outage left over 70% of the country without electricity. The blackout stopped mass transit in the capital of Caracas, shuttering businesses, gas stations and even disrupting operations at hospitals.

Mauro Zambrano, representative of the hospitals and clinics union of Caracas, told CNN there have been four deaths at hospitals. One death took place at the Magallanes Hospital and another at the University Hospital, Zambrano said, adding that even though both hospitals had electricity "there were some failures."


The other two deaths took place at the Children's Hospital and at the Miguel Carreño Hospital where a premature baby girl died, Zambrano said. CNN has not independently verified any of the four deaths.

"Generators are not able to make the hospitals run, even though personnel do as much as they can," Zambrano said. "We have hospitals with operating rooms that 80% non-functional, medical equipments aren't working." State broadcaster VTV reported that some power had been restored but provided no specific numbers or locations.

Authorities quickly blamed the blackout on anti-government saboteurs. Speaking on VTV, Electricity Minister Luis Motta Dominguez called the blackout an "electricity war" and act of sabotage. He alleged, without offering evidence, that the attack took place at Venezuela's main hydroelectric power station in Guri in the southern state of Bolivar, which provides about 70% of the country's energy.

A former electricity executive at Venezuela's National Electric Corp. told CNN that the outage at the power station was most likely the result of old equipment and bad maintenance. "That damage happened because the machines are old," Miguel Lara said. "There are not any spare parts or enough people to upgrade the system." 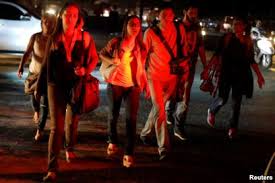 Blackouts have become a daily occurrence across Venezuela as the economic crisis has worsened, but one of this magnitude is rare. Rampant inflation and food scarcity have gripped the country under embattled President Nicolas Maduro, and thousands have fled to neighboring countries as shortages, political turmoil and crime rates have soared.

Reuters reported local media as saying this outage affected the capital, Caracas, as well as at least 15 of the country's 23 states. Vanessa Suarez, from Ureña, said she and her family still have no water and electricity. "There is no power, no water, nothing. We are here to ask for diapers and food because there's nothing there," Suarez said.

One woman on the bridges in Cúcuta -- she did not want to be named for fear of her safety -- told CNN she hasn't had electricity for four days. She's from Carpacho, west of San Cristobal, and says all their food has gone bad.

Sandra, from Barquisimeto, says it took her 12 hours to get to Cúcuta to buy food that will last her family a week. "We have spent one day with no power, no internet, no cell service," Sandra said, adding that this is her first time crossing through the "trocha," or the dirt paths since Venezuela hasn't opened their border.

Sandra, who was fearful of giving her last name, is from Lara State and says it is the worst state to live in. "For the few people that can have meat in the fridge, the meat has gone bad," she said. "It has been over 24 hours that we don't have power."

Critics of Venezuela's government blame corruption and underinvestment, with opposition leader Juan Guaido -- who declared himself the country's acting president in January -- describing the blackout as further proof that time is almost up for Maduro.

"Venezuela knows that the light will arrive with the end of the usurpation," Guaido tweeted. Nicolas Maduro’s government blamed the outage on sabotage against the main electric power dam.

Just over an hour later, Maduro posted on Twitter: "The electric war announced and led by the American imperialism against our people will be defeated. Nothing and no one can beat the people of Bolivar and Chavez. Maximum unity of the Patriots!" US Secretary of State Mike Pompeo hit back at Maduro, blaming him for the situation.

"The power outage and the devastation hurting ordinary Venezuelans is not because of the USA. It's not because of Colombia. It's not Ecuador or Brazil, Europe or anywhere else. Power shortages and starvation are the result of the Maduro regime's incompetence," Pompeo tweeted.

"Maduro's policies bring nothing but darkness," he added in a separate message. Then he tweeted, "No food. No medicine. Now, no power. Next, no Maduro." 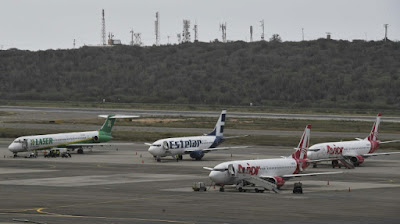 Power cut compounded an atmosphere of chaos that has gripped the South American nation. Venezuela's nationwide blackout left large areas of the country in chaos on Friday, crippling day-to-day functioning of hospitals and other public services.

Witnesses described scenes of chaos at several hospitals as relatives tried to move patients in the dark to clinics with better emergency power facilities. Marielsi Aray, a patient at the University Hospital suffering from an aggravated infection, died at dawn on Friday after her respirator stopped working, her uncle Jose Lugo said.

"The doctors tried to help her by pumping manually, they did everything they could, but with no electricity, what were they to do?" a distraught Lugo told AFP. Wiping away tears, he described how his niece had been brought to the bottom of the 11-story Caracas hospital on a stretcher after the elevators stopped working.

"They got her to the ground floor where they had electricity, and connected her up but because of the transfer and the waiting and everything, she faded away," he said.

The power cut compounded an atmosphere of chaos that has gripped the South American nation, already battered by economic collapse, since opposition leader Juan Guaido declared himself interim president in January and asserted that President Nicolas Maduro was no longer legitimate.

Lugo said another patient had died in the parking lot in the chaos of the blackout, as people "tried to get sick people out of here and move them to other places where they had generators and equipment that would work. The screaming was brutal," he said.

Emergency generators fail - Backup generators at the JM de Rios children's hospital in downtown Caracas failed to kick in when the blackout hit, said Gilbert Altuvez, whose eight-year-old boy is among the patients. "The night was terrible. Without light. Total madness," he said. 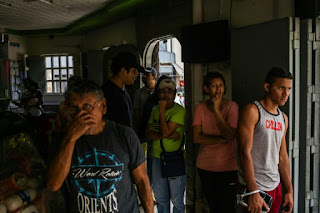 When more generators were brought to supply emergency power, they weren't enough. "None managed to supply it completely," said Altuvez, 38. Emilse Arellano said urgent dialysis for her youngest child had to be canceled Friday, after a night during which staff worked by the light of cellphones. "The children were very scared," she told AFP.

The putrid odor of rotting flesh hung around the entrance to Caracas' main Bello Monte morgue on Friday where the refrigeration system had stopped working. "We can't take in any more corpses," an employee said on condition of anonymity.

Luis Moises Guerra had come to collect the body of his son, Johan, a gunshot victim killed three days ago. "This is the second day I've spent here and now there is no light," said Guerra. "If they don't give me the body of my son today I'll leave it here and I won't come back anymore."

Guaido told supporters in Caracas it wasn't normal "that 50 percent of the hospitals in the country don't have electric plant" to be able to cope with such an emergency. The National Assembly leader is recognized as interim president by more than 50 countries who agree that Maduro's re-election was illegitimate.

Related posts at following links:
Socialism Destroys Venezuela And Will Destroy US Too
1,000,000% Hyperinflation In Venezuela's Socialist Hell
Posted by Hla Oo at 11:59 PM