(Eric Cortellessa’s article from The TIMES OF ISRAEL on 01 March 2019.) 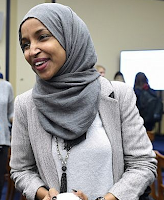 Appearing alongside several other Democratic House members at a panel event billed as a “Progressive Town Hall” Wednesday night, the Minnesota lawmaker indicated that the uproar over her controversial tweets suggesting the American Israel Public Affairs Committee (AIPAC) buys off politicians was really bad-faith Islamophobic outrage.

“What I’m fearful of — because Rashida and I are Muslim — that a lot of our Jewish colleagues, a lot of our constituents, a lot of our allies, go to thinking that everything we say about Israel to be anti-Semitic because we are Muslim,” Omar said, referring to Michigan Rep. Rashida Tlaib, who was also on the panel.


A video of the event, at a Washington, DC, coffee shop, was posted to Facebook. The comments were first reported by Jewish Insider. Last month, Omar tweeted that American elected officials’ support for Israel was “all about the Benjamins,” referring to American one-hundred dollar bills. In a follow-up tweet, she said she thought the pro-Israel lobby AIPAC was paying them to back Israel.

The social media posts were quickly met with intense condemnation, including from House Democratic leaders who demanded she apologize. “Anti-Semitism is real and I am grateful for Jewish allies and colleagues who are educating me on the painful history of anti-Semitic tropes,” Omar later said in a statement.

“My intention is never to offend my constituents or Jewish Americans as a whole … This is why I unequivocally apologize.” She also reaffirmed AIPAC and other lobbies — such as the National Rifle Association and fossil fuel industry — that have outsize influence in Washington. Omar said on Sunday night that objection to her Israel criticisms was intended to stifle the conversation about America’s policies toward the Jewish state.

“To me, it’s something that becomes designed to end the debate because you get in this space of – yes, I know what intolerance looks like and I’m sensitive when someone says, ‘The words you used Ilhan, are resemblance of intolerance,'” she said. “And I am cautious of that and I feel pained by that. But it’s almost as if, every single time we say something regardless of what it is we say … we get to be labeled something. And that ends the discussion.”

“We end up defending that and nobody ever gets to have the broader debate of what is happening with Palestine,” she added. “So for me, I want to talk about the political influence in this country that says it is okay to push for allegiance to a foreign country.” 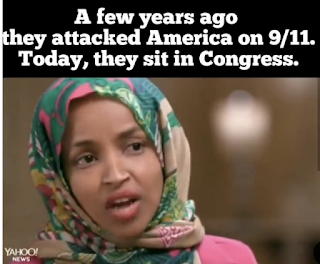