Jews & Mossad Were Behind The Christchurch Massacre

NZ Muslim Leader Tells Who Was Really Behind the Attack: A leader of the Muslim community in New Zealand has solved the mystery of who was really behind the March 15, 2019 massacre of 50 Muslim worshipers in two mosques in Christchurch.

That’s a relief, because we thought it was Brenton Tarrant, the 28-year old Australian man with ties to white supremacist movements who live-streamed the shooting. Ahmed Bhamji waited to reveal his inside information at the most appropriate time and with the largest possible audience – at the “Love Aotearoa (New Zealand) Hate Racism” rally.

Bhamji is the chairman of the prominent Islamic institution, the Mt. Roskill Masjid E Umar in New Zealand. He was recently given the distinct honor of introducing the prime minister of New Zealand when she came to speak at the mosque after the massacre.


Speaking in front of the 1,000 people who attended the “Hate Racism” rally, Bhamji gave it all away: “I really want to say one thing today. Do you think this guy was alone? I want to ask you: Where did he get the funding from? Where was he getting the money from? I will not mince words.

“I stand here, and I say I have a very, very strong suspicion that there’s some group behind him, and I am not afraid to say I feel Mossad is behind this.” (For those of you who are not as much “in the know” as Bhamji, Mossad is the foreign intelligence agency of Israel.)

Bhamji further disclosed: “And not only them. There are some business houses also who are around [i.e., in New Zealand], you know, Zionist business houses. They are right behind him.” So now we know. It’s the Jews, aka the worldwide Zionist conspiracy.

Mossad must be soooo tired of dealing with Israel’s own problems – simple things they have obviously already solved like:

* Hamas missiles being fired into communities north of Tel Aviv (this week)
* the on-going terror war against Israeli civilians being incited by the Palestinian Authority (which claimed two more lives last week)
* Iran (whose mullahs are committed to Jewish genocide) breathing down Israel’s border with Syria and, of course,
* Hezbollah (ditto about the Jewish genocide sentiment), the Lebanese terror group with its tens of thousands of precision missiles pointed at just about every location in Israel.

After financing his extended trip around the world, the gunman Tarrant must have run out of money to buy his guns and bullets and looked to the ones with the “Benjamins” (just ask freshman Congresswomen Ilhan Omar, she knows who they are.)

Of course, there was no mainstream media coverage of his speech (save one outlet in New Zealand, one in Israel and the video of it posted on Twitter) because everyone knows that Jews also control the mainstream media in America. All sarcasm aside, it is a sad day when one realizes how steeped in anti-Semitism many immigrants from Muslim countries are.

Commenting about the need for America to examine its own refugee communities in the wake of America’s own congresswoman’s “rapid-fire tweets pushing historically vile myths about the Jewish people,” Clarion’s National Correspondent Shireen Qudosi, herself a Muslim from Afghan and Pakistani decent, wrote, “In most Muslim countries — and in un-evolved Muslim communities — Jews are seen as notorious conspirators not worth trusting, even not worth treating with human dignity.”

It is noteworthy that most Jews were expelled from these countries and haven’t lived there for decades. In the case of Congresswoman Omar, Qudosi writes,

“This holds despite the fact that Ilhan Omar’s family background is portrayed as being educated white collar workers. Her father is reported to have worked as a teacher trainer, while her grandfather is said to have been the director of marine transport in Somalia. Her aunts and uncles are reported to have worked as civil servants and educators. In the U.S., that work ethic branched into democratic citizenship.

“And yet, less than two months into office as a congresswoman of one of the highest caliber nations in the world, Omar cannot refrain from blasting anti-Semitic slurs with disturbing glee. Each slur is followed by hollow and forced apologies, before doing it again.”

Both Omar a Somali-born-American and Bhamji a Fiji-born-Indian-Newzealander were most likely raised in environments permeated with anti-Semitism, tellingly referred to as the oldest prejudice known to mankind.

Yet, just as the West has given them the opportunity to begin their lives anew in an environment free from war, strife and prejudice, it is each of these individual’s responsibility to root out these sentiments from within themselves. 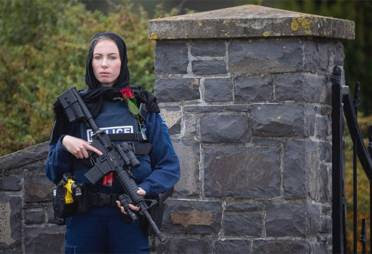 Socialist activist Joe Carolan, co-founder of LAHR, said that the war in Palestine has "come home" because six of the victims of the Christchurch shooting had been refugees from Palestine.

Ahmed Bhamji, the Fijian chairman of Masjid Umar, the Auckland-area mosque at which New Zealand Prime Minister Jacinda Ardern wore a hijab and spoke the same day, said that the Mossad and Zionist businesses in New Zealand helped the Christchurch shooter stay in New Zealand and buy the guns he used in the massacre.

A man in the crowd interjected: "That's the truth! Israel is behind this!" Masjid Umar is affiliated with the Federation of Islamic Associations of New Zealand, of which Bhamji has been a committee member. Bhamji was also a member of Fiji's parliament. Apna TV's Facebook page says that it is "New Zealand's first and only 24/7 free-to-air Indian TV channel on Channel 36."

To view the clip of the rally on MEMRI TV, click here or below. 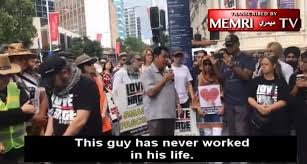 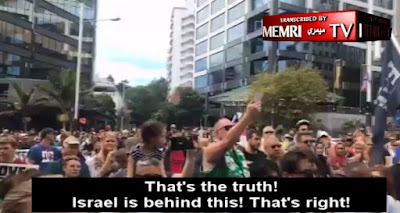 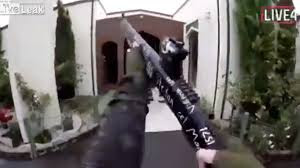