Cortez The Socialist Under Water In Public Opinion 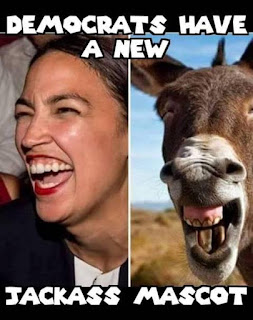 AOC’s Attack on Capitalism, and the Democrats’ Radical, Share-the-Wealth Agenda: Rep. Alexandria Ocasio-Cortez seems to think we can simultaneously eliminate capitalism while still enjoying its fruits—a fallacy that has toppled many would-be utopias in the past.

During the SXSW event in Texas, the New York Democrat condemned capitalism, labeling the economic system that has lifted billions of people out of poverty “irredeemable,” while complaining about inequality in America.

During the same event, for instance, Ocasio-Cortez referenced Bill Gates’ idea of a 90 percent tax on robots, arguing that the enormous tax should be slapped on U.S. businesses to pay for welfare programs, so that laid-off workers don’t have to find new jobs as automation reshapes the economic landscape.


“We should not be haunted by the specter of being automated out of work,” Ocasio-Cortez said. “The reason we’re not excited about it is because we live in a society where if you don’t have a job, you are left to die.”

Of course, unemployed workers aren’t “left to die” in America, precisely because we don’t tax corporations at 90 percent. A tax rate of that magnitude, after all, would devastate the private sector, forcing businesses to lay off workers and move their operations—including automated processes—overseas. Ocasio-Cortez’s plan, in other words, would harshly penalize the very workers she claims to be trying to help.

Before discussing ways to strangle U.S. corporations, though, Ocasio-Cortez should have considered what happened to France under former President François Hollande. By 2013, Hollande’s democratic-socialist policies had pushed many job-creators out of the country, leading to economic instability and uncertainty that still plague the French people today.

According to a recent study, the Green New Deal would cost U.S. taxpayers around $93 trillion over 10 years, or an eye-popping $650,000 per household. On an annual basis, that’s about double the size of the entire federal budget proposed by President Donald Trump — a level of spending that would be untenable, even without her concurrent ambition to kill the golden goose of capitalism.

Ocasio-Cortez just doesn’t seem to comprehend the irredeemable history of her own ideology or the pernicious effects it would have on American society. Sooner or later, though, she and the Democratic Party to which she claims to belong will have to face the fact that the more they try to “redistribute” America’s wealth, the less wealth there will be left to go around.

(Herman Cain is former CEO of the National Restaurant Association and a former presidential candidate.)

U.S. Rep. Alexandria Ocasio-Cortez (D-NY) is becoming more unpopular as the American people get to know her. According to the latest national polling from Gallup, the freshman congresswoman and social media superstar is not wearing well at all, despite all the gushing coverage she receives from the establishment media.

At the national level, she is already much better known than most politicians. This will surprise no one who watches cable news, but back in September, a full 50 percent of those polled said they never heard of her. Since then, all the adoring media exposure dropped that number almost in half.

“Ocasio-Cortez is known by most Americans at this point, despite having only two months on the job as a House freshman. The only more recognizable member so early on was Hillary Clinton in 2001, who was already well known from the previous decade as first lady,” Gallup reports.

According to Gallup, of those who do know Ocasio-Crazy, a meager 31 percent view her favorably, while a plurality of 41 percent view her unfavorably. That puts her 10 points underwater with the American public.

Over the last five or so months, her favorability rating has increased only seven points (24 to 31 percent) while her unfavorable rating leaped a whopping 15 points (26 percent to 41 percent). What is most revealing about these numbers is what it says about the eunuchs in the establishment media. The glowing wall-to-wall coverage Ocasio-Crazy has enjoyed backfired bigtime.

And so, once again, we see compelling proof the establishment media no longer have the power or the moral authority to move public opinion their way. In fact, in the case of Ocasio-Crazy, public opinion moved in the opposite direction the media intended. 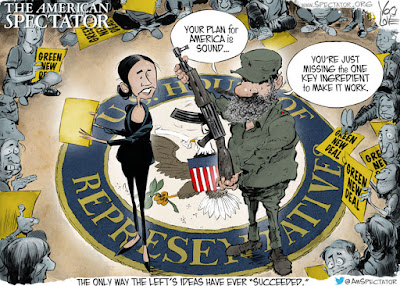 Related posts at following links:
Trump: Socialism Would Destroy America In A Decade Or Even Less
AOC's Economic Polices: The Road To Ruin For USA
Posted by Hla Oo at 7:33 AM