Trump: Socialism Could Destroy US In A Decade 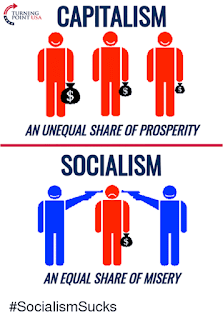 Donald Trump: ‘Seductive’ Socialism Would Send Country ‘Down the Tubes’ in a Decade or Less. President Donald Trump told Breitbart News on Monday that he feels “very strongly” that the United States will never succumb to socialism.

“I feel that—I feel it very strongly,” Trump replied when asked by Breitbart News’s Washington Political Editor Matthew Boyle about his pledge in the State of the Union address that the United States would never become a socialist country. Trump continued by explaining that many Democrats are campaigning on socialism, however, because it is “easy” to campaign on but difficult “to govern on.”

“Now with that being said, you always have to be very careful, because socialism is easy to campaign on but tough to govern on, because the country goes down the tubes,” Trump said. “But when you tell people free medical, free education, no more student loans—all of the different things that you say—it’s a great thing to campaign on, but then ten years later the country is down the tubes.


“It’s gone. So, you always have to be careful with it, because you know you talk about single-payer, it sounds very seductive—single-payer—say what you want, but it’s a very seductive thing. But it means you’re not going to have good healthcare, it means the country is not going to be able to afford it. Not only is the country not going to be able to afford it, but it’s more than the entire revenue stream taken in for the entire—it’s like not even close right?

In response to a follow-up question from Breitbart News senior White House correspondent Charlie Spiering, Trump said that the pendulum swings in politics frequently. Trump said that if the left somehow took control down the road, the voters would eventually course correct and choose a Republican next. “Then what happens is you take a violent turn to the other direction,” Trump said.

When Spiering asked if Trump is worried about a “violent turn” toward socialism after two years of his administration’s policies, Trump said he is not. He pointed to his rising approval rating poll numbers, which he pointed out he has achieved despite overwhelmingly negative media coverage. 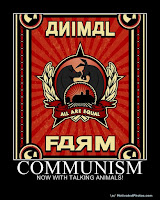 “I don’t think so, because we’ve had our best poll numbers,” Trump said. “You saw them—we’ve had our best poll numbers. We had nothing but fake news. Fox treats me well—and when I say well, I define well as fairly. It’s not—some of it’s not so good at all. But at least it’s fair. I do really well with local—you know, the local stuff is shockingly good.

“It’s almost like not even to be believed. But CNN and MSNBC and NBC, ABC, and yeah CBS, they’re all extraordinarily bad. I would say NBC is maybe the worst and very dishonest. It’s not even like bad, like bad reporting. It’s totally dishonest reporting. It’s really pretty incredible what they can get away with.”

Breitbart News Editor-in-Chief Alexander Marlow noted that many on the left are now coming “out” as socialists, publicly revealing themselves as such for the first time. When asked by Marlow whether he thinks there is a rise in support for socialism in the country, Trump questioned whether there actually is one happening.

In his response, he pointed to how different Democrat presidential candidates have handled the question of supporting capitalism or socialism. Trump said the next election may very well be a referendum on socialism versus capitalism.

Trump specifically cited one candidate whom he mockingly said he would not name (he later whispered “Hickenlooper”) for dodging a question on capitalism. Former Colorado Gov. John Hickenlooper, a Democrat running for president in 2020, dodged when asked whether or not he is a capitalist on MSNBC.

“Well I don’t know if there will be a rise, we have to see that—and that we will only know in an election,” Trump said. “So far, if you add it all up, you know, I watched a certain gentleman—I won’t mention his name, but he made a couple of bucks, he refuses to acknowledge capitalism. You saw that over the weekend—Hickenlooper. He was ashamed of the word, and yet I’ve seen others maybe going in the other direction.”

Trump’s comments came during a more-than-40-minute exclusive interview in the Oval Office in the White House on Monday afternoon. 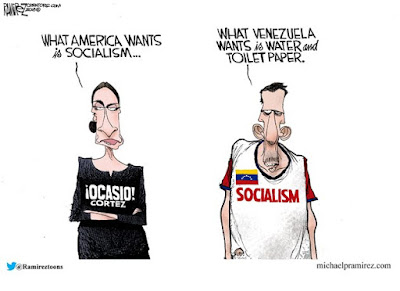 (Blogger's Notes: From My book "Burma In Limbo" - Burma was known as the Rice Bowl of British Empire where once sun never set. But Burma now is one of the poorest least- developed-countries on earth. Why is naturally-rich Burma in such a horrible shape? Burmese and non-Burmese alike ask and eager to know the answer.

The answer is quite simple and also complex. Simple because the answer is the Left-wing Military Dictatorship from early 1962 to late 1988. Complex because no body really knows how Burma ended up with an extremely rare left-wing military dictatorship run by the staunch anti-communist Army under General Ne Win.

Every other army in this world is right-wing but Burmese army once was a left-wing Socialist army till 1988. The parallel but completely opposite example compared to Burma was South Korea under Park Chung-hee while Burma was under Ne Win. General Park Chung-hee (1917-1979) industrialized war-ravaged South Korea and lifted his poor people out off poverty while General Ne Win (1911-2002) isolated war-torn Burma and sunk the once-rich people of Burma into extreme poverty.

My Burma in Limbo - Book 1: Rich Colony to Dictatorship explains how Burma unfortunately was forced into Ne Win’s mad hands by a group of left-wing extreme-nationalists led by our national hero General Aung San (1915-1947) the so-called father of independence and the founding father of modern Burmese Army.

Motherfucking Bastard Ne Win did turn Burma onto the road to ruin by two major Socialist acts. On 6 January 1966 General Ne Win’s Revolutionary Socialist Government stupidly prohibited the civilian populace from transporting, storing, distributing, and trading of 460 basic commodities including the staples such as rice, peanut-oil, and salt. He then nationalized every industry and even small businesses like retail shops. Burma has never recovered from those Socialist moves till today and still one of the poorest nations on earth.

Trump generously stated that Socialism would ruin America in a decade, but in Burma case it took only less than two years to get people horribly starve as the essential commodities completely disappeared. Destruction was so fast people couldn't grasp what had happened to their lives.

Just consider one of AOC's favourite Socialist policies, the Medicare For All. To achieve that all the hospitals must be owned or completely controlled by the Federal or State governments. As simple as that. Like in Australia and UK where Medicare For All seem to be working. It would destroy the health industry and medical profession as we know it today. Fucking mad, that AOC bitch!)