A Chinatown mysteriously emerges in backwoods Myanmar: Shwe Kokko, a remote town along Myanmar’s Moei River, is the latest odd and bold outpost of China’s Belt and Road Initiative.

The town is still under construction but it already has a distinct Chinese flavor. There are Chinese restaurants, beauty salons and karaoke parlors. Chinese residents live in temporary barrack-style buildings while waiting for new apartment blocks and villas to be completed.

Other buildings resemble huge warehouses and what could be offices for businesses or administration. Even the armed security guards outside some of the houses where the migrants live have Chinese characters on their armbands. But this is not yet another construction project in China.


Rather, it is all happening at Shwe Kokko, an enclave on the Myanmar side of the Moei river that forms the border with Thailand some 500 kilometers northwest of Bangkok and 420 kilometers east of Yangon, Myanmar’s commercial capital.

The border enclave is controlled by a local ethnic Karen warlord, Chit Thu, who has made peace with the Myanmar military and converted his armed units into an officially recognized Border Guard Force (BGF). 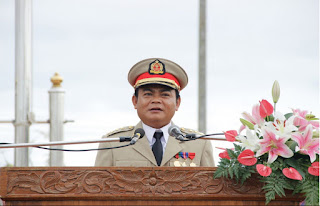 The total Chinese-built project covers 2,000 acres, or more than 800 hectares. Myanmar media have reported that the total investment could reach US$1.5 billion, which would require permission from the Myanmar Investment Commission. But such a clearance has reportedly not yet been finalized and the legal status of the project remains unclear.

That is hardly surprising as the construction is located in a BGF-controlled area where Chit Thu and his men, not the central authorities in Naypyitaw or the Kayin State government, are in charge.

The investment is reputedly backed by the Jilin Yatai Group, a Chinese state company which was registered with the Myanmar Ministry of Planning and Finance in February 2017 under the name Myanmar Yatai International Trading Company.

According to a September 18, 2018 report in the Myanmar Times newspaper, the company and Chit Thu signed a partnership agreement in September 2017, organized by the China Federation of Overseas Chinese Entrepreneurs.

Chit Thu was once a junior officer in the Karen National Liberation Army (KNLA), the armed wing of the Karen National Union (KNU). When the Karen rebel movement split in late 1994, he joined the Democratic Karen Buddhist Army (DKBA), which made peace with the Myanmar military.

Chit Thu then rose to become one of the DKBA’s most powerful commanders and launched several attacks against KNLA positions near the Moei border river. His troops achieved BGF status in 2010, five years before the rest of the DKBA signed in October 2015 the Myanmar government’s so-called Nationwide Ceasefire Agreement, which also included the KNU and a smaller Karen faction.

Chit Thu’s long-standing relationship with the Myanmar military enabled him to gain control over the Shwe Kokko area, which is located almost exactly where the KNLA had a military base called Kawmoorh, or Wangkha, which was overrun by government forces in February 1995. 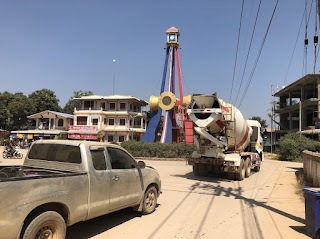 Shwe Kokko was built on the ruins of Kawmoorah, and became a thriving market town. A clock tower with stone replicas of Kayin (Karen) frog drums was erected in the center, and Chit Thu has a palatial residence near the new town.

The Kayin part of town also has schools, temples and churches and a market place where local produce can be bought and sold. Since becoming a BGF commander, Chit Thu has strengthened what amounts to his own private army into a formidable force. News reports have said he is popular for his community development work in education, health care, and Karen (Kayin) culture, and that he is known as a persuasive negotiator.

The new mega-project, which locals here call “Chinatown”, was launched in April 2017. Well-placed sources based in the Thai-Myanmar border area say that when completed it will include luxury housing, hotels, shopping malls, trade centers, factories, a golf course, casino, and perhaps even an airport.

The exact number of Chinese technicians and workers now at Shwe Kokko is a closely guarded secret, but judging from observations derived from driving through the area it is certainly in the hundreds and perhaps even in the thousands. Still, it is unclear why a mega-project of such scale and ambition is being built on the banks of a remote border river.

There is a major border crossing point between Thailand’s Mae Sot and Myawaddy in Myanmar, 20 kilometers south of Shwe Kokko. A first bridge was built and opened for traffic in 1997, facilitating a now brisk cross-border trade with convoys of trucks laden with goods and thousands of people crossing the river every day.

However, a second so-called “friendship bridge” was recently built near Shwe Kokko but land ownership disputes have prevented it from opening and the area is still a commercial ghost town.

There are also a string of casinos on the Myanmar side of the Moei south of Shwe Kokko, where gamblers are unofficially ferried across the river. The crossing points are not official and casinos are, at least in theory, banned in Myanmar. But even those gaming dens are not enough to justify a billion dollar mega-project in an area many would describe as being in the middle of nowhere.

According to one interpretation, put forward by local businessmen in Mae Sot, the project is a private undertaking by Chinese entrepreneurs who want to get their money out of China. As more highways are built across the region, they say the project could one day become a lucrative hub for trade. 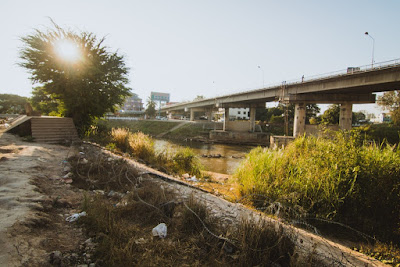 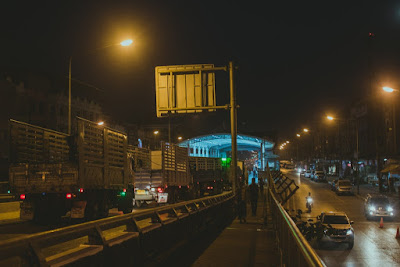 The border crossing at Mae Sot-Myawaddy stands on Asian Highway 1, or AH1, which connects East, Southeast, South, and West Asia. The Myanmar stretch of AH1 was always the problem because of ethnic insurgencies along the route, but that has changed with recent ceasefire agreements and the formation of BGFs in the area.

More skeptical observers, including regional intelligence analysts, say that it is hard to believe that such as massive project could be carried out under the aegis of a state-owned company without official connections in Beijing.

If so, that means the project is of strategic importance to China as it creates another outpost in its envisioned Myanmar-China Economic Corridor, a vital part of Chinese president Xi Jinping’s $1 trillion Belt and Road Initiative to connect China with the rest of the region and beyond.

Similar trade centers have been built in several areas along Myanmar’s northern border with China. From that perspective, Shwe Kokko is not in the middle of nowhere. From there, it would be possible for China to observe and to some extent control traffic on AH1, at a strategically important crossroads between Myanmar, Thailand and the ethnic armed groups that are still active in mountainous border areas.

But until China’s intentions become clear, local residents will wake up to the sound and sight of new buildings – one seemingly bigger than the next – rising up and up on the western banks of the Moei river.
Related posts at following links:
Battle of Karen Fortress Kawmoora aka New Wankha (1989)
Phoe Kee Do Battles - Episode 2 (New Wankha 1989)
Burma In Limbo - 5 (Karen-Led Burma Army)
Burma In Limbo - 6 (Karen-Burmese War)
Posted by Hla Oo at 5:06 AM