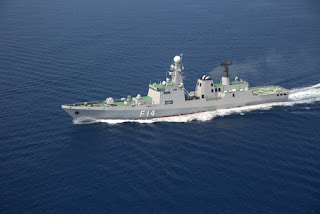 The Senior General took the salute of the Duty (Navy) Troop. The Naval Fleet Commander (Duty) who would command the exercise presented the salient points of the exercise, and gave verbal combat order. The Naval Fleet Commander (Duty) and commanding officers of war vessels returned to their respective naval vessels and conducted the Combined Fleet Exercise-Sea Shield in accordance with its programme.


First, a team of navy seals conducted a drill in which they approached an enemy-occupied merchant ship on board the four fast combat boats and three helicopters, captured the ship and rescued the hostages.

Then, another helicopter rescued the crew of the ship and other hostages; two fast combat boats rescued navy seals and ship crew from the ship that was sinking due to the explosion of enemy-planted mines, and sailed away from the scene; and the burning ship was pulled away by two navel sea-going tugboats for extinguishing the fire at the sea.

Later, helicopters, fast combat vessels, officers and other ranks who participated in the exercise saluted the Senior General. The landing and takeoff exercise of helicopter was performed aboard war vessel Aungzeya. The commander of Navy seals troop who participated in the exercise of saving hostages from the merchant ship himself presented a report to the Senior General. 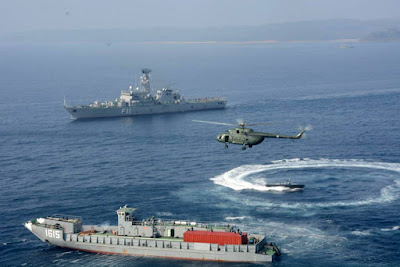 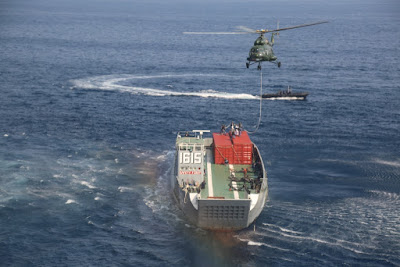 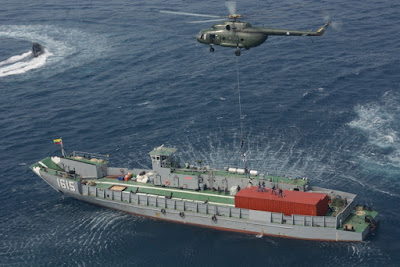 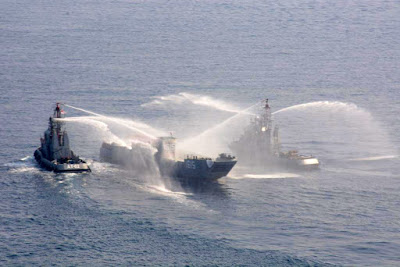 Then, while marching in designated formations, war vessels performed exercises to prevent danger of enemy’s submarine and airstrikes of enemy, open fire of anti-submarine mines and torpedoes for prevention of surprised attacks from fast combat vessels of enemy, change marching formation to avoid airstrikes.

Later, deploy war vessels to combat the fast vessel of enemy with attacks, conduct counter-shooting to long-range guided missiles of enemy with the use of weapon systems from own vessels,and took practices of opening collective fire of mix caliber artilleries, exercises of electronic warfare, firing of rockets and shooting of large artilleries.

After the combat exercise, two war vessels participated in one more exercise namely the Underway Replenishment At Sea, aimed at re-supplying fuel, water, rations and ammunition among war vessels to one another. 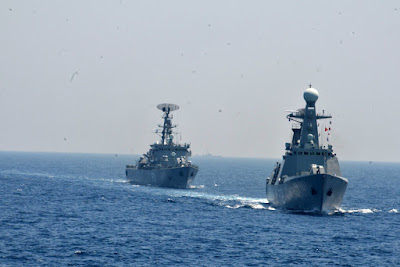 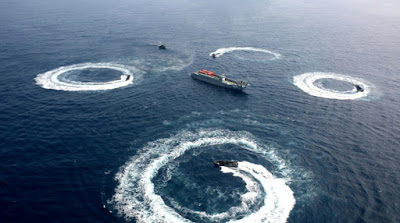 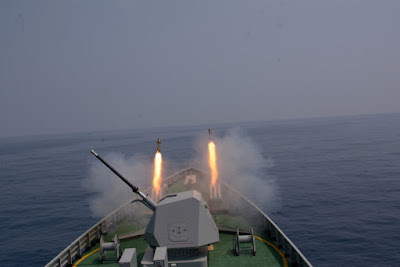 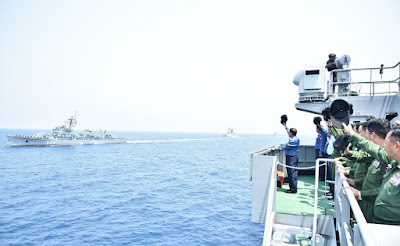 The Senior General put the record signature in commemoration of the exercise in the visitors’ book of war vessel Aungzeya. In his speech on review of the Combined Fleet Exercise-Sea Shield 2019 to the commanding officers of the war vessels, officers and other ranks, the Senior General said that:

“Continuous exercises help the Tatmadaw (Navy) enhance its capability. Exercises of the Tatmadaw aim to enhance defence capability for defending the State at full capacity. Defending means protecting the life and property of the people of the country as well as preserving and safeguarding the above- and underground and underwater natural resources owned by the State.

“All military units have responsibility for defending the interest of the State. It needs to further add more armoured vehicles, tanks, fighter airplanes and helicopters in order to fully protect all territorial regions of the State.

“So also, it needs to extend construction of offshore/inshore war vessels for safeguarding the seas. To be able to utilize these materials, officers and other ranks need to continuously take training for enhancement of capability.

“The nature of war means that all armed forces of Army, Navy and Air have to work together, but only an armed force can’t work alone. As the State needs to have a comprehensive defence system, efforts are being made to enable the navy to advance to Blue Water Navy.

“It is required to make constant observations on the establishment of navies of the neighbouring countries. The capability of Tatmadaw (Navy) will have to be enhanced. The territorial waters must be safeguarded by maritime police force, coast guard and navy in their respective areas.

“At present, the Tatmadaw (Navy) is discharging the duties of coast guard. Lessons must be taken from the current experiences gained from practices sessions and then they are needed to be applied in the practical battlefields. It is also required to gear up more capability rather than now.”

Next, Senior General Min Aung Hlaing presented cash awards to the officers and other ranks who took part in the military exercise. Reporters from local news media onboard war vessel Aungzeya covered the naval exercise.

The Combined Fleet Exercise-Sea Shield has been held since 2014 with the aim of controlling warfare skillfully in four operation fields through three readiness of the naval vessels in order to strengthen sovereignty in the territorial waters and airspace.

The current Combined Fleet Exercise-Sea Shield 2019 is the fifth naval military exercise. Military vessels, helicopters and officers and other ranks of the Tatmadaw (Navy) are involved in the combined fleet exercise. Combat power and prowess of military vessels and soldiers will be increasingly developed by launching combined practice of firing and movement in the military exercises.

Afterwards, the Senior General went on an inspection tour of health care services being provided to local people by the specialists from Tatmadaw sea-going hospital vessel (Thanlwin) at township people’s hospital in Coco Island Township and comforted the patients.

Next, the Senior General met with local reporters who covered Combined Fleet Exercise-Sea Shield 2019 and clarified about the military exercise of the Tatmadaw for the enhancement of national defence power. 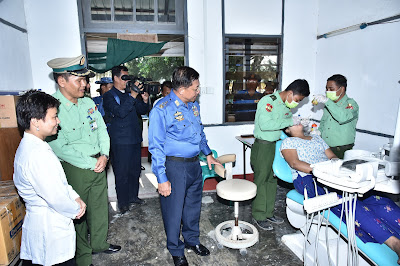