(Madeleine Weast’s article direct from The FREE BEACON on 20 February 2017.) 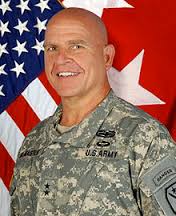 The president touted McMaster's credentials, saying he is "a man of tremendous talent and tremendous experience." "I watched and read a lot over the last two days. He is highly respected by everybody in the military, and we're very honored to have him," the president added.

McMaser called it a "privilege" to be appointed national security adviser. "I would just like to say what a privilege it is to be able to continue serving our nation," McMaster told reporters. "I'm grateful to you for that opportunity, and I look forward to joining the national security team and doing everything that I can to advance and protect the interests of the American people."

McMaster, 54, has been regarded as "smart, energetic, and tough" by Tom Ricks of Foreign Policy. When McMaster was a colonel he served as an advising officer on counterinsurgency operations in Iraq for David Petraeus, who was leading U.S. combat operations in the country at the time.


During the Iraq War, McMaster argued for the U.S. to switch to counterinsurgency operations to secure local populations from the country's insurgent movement, working with Petraeus and others to lead that effort. McMaster is a decorated combat veteran who helped secure the Iraqi city of Tal Afar from Sunni insurgents in 2005 through innovative leadership.

McMaster, who also served in Afghanistan and the Persian Gulf War, is currently director of the Army Capabilities Integration Center and became deputy commanding general, Futures, U.S. Army Training and Doctrine Command, in July 2014. McMaster received a doctorate in military history from the University of North Carolina at Chapel Hill.

Retired Lt. Gen. Keith Kellogg, who was acting national security adviser after Flynn's resignation from the post, will serve as chief of staff on the National Security Council, working with McMaster to advise the president and coordinate the many pieces of the country's national security apparatus.

"That combination is very, very special," Trump said of Kellogg and McMaster. Trump also addressed on Monday former United Nations Ambassador John Bolton, who was considered a front runner to replace Flynn by senior White House officials. "I know John Bolton we're going to be asking to work with us in a somewhat different capacity," Trump said.

Flynn resigned last week after misleading Vice President Mike Pence about a phone conversation he had with the Russian ambassador to the U.S. in December about U.S. sanctions. Trump had first asked retired Vice Adm. Robert Harward to replace Flynn as his national security adviser, but Harward turned down the job. 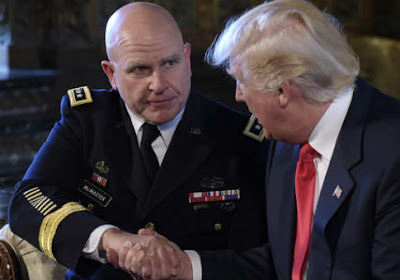 Donald Trump’s new national security adviser is a widely respected military strategist and one of the most celebrated soldiers of the Iraq war.

Lieutenant General Herbert (H.R.) McMaster, who has fought in both Iraq and Afghanistan, was a troop commander during the first Gulf War when he first made his name as the hero of what became known as “the last great tank battle of the 20th Century.”

The then Captain McMaster commanded Eagle Troop of the 2nd Armoured Cavalry Regiment at the intensely fought Battle of 73 Easting in 1991. Although vastly outnumbered, his Eagle Troop of just nine tanks destroyed over 80 Iraqi Republican Guard tanks and vehicles without loss.

The battle, which has become part of US military folklore, has since featured in several books about Operation Desert Storm, including Tom Clancy’s 1994 book “Armored Cav.” During the second Iraq war he became a counterinsurgency expert and senior adviser to General David Petraeus, who was then commander of US forces in Iraq.

In 2004 Colonel McMaster led the 3rd Armoured Cavalry Regiment to battle in the city of Tal Afar, which culminated in the defeat of the city’s insurgent strongholds. The pioneering counter terrorism tactics he used in the operation were later credited for leading to the first successes in overcoming the Iraqi insurgency.

Known as one of the Army’s leading intellectuals, he became a vocal critic of the military status quo, criticising George W. Bush’s administration over the Iraq War and slamming the Joint Chiefs of Staff for their handling of the Vietnam War in his 1997 book, Dereliction of Duty.

He was twice turned down for promotion despite his towering reputation on the battlefield, before becoming a brigadier general in 2008. In 2011, Army Chief of Staff General Martin Dempsey remarked that he was “probably our best Brigadier General.”

In 2014, Time magazine named him as one of the 100 most influential people in the world, describing him as “the architect of the future US Army.” 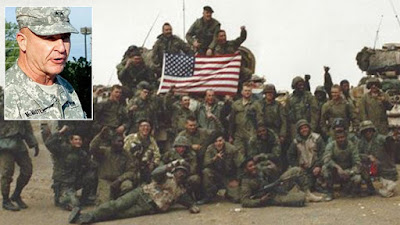 “A man of tremendous talent”

Announcing his appointment, Mr Trump called Mr McMaster, 54, “a man of tremendous talent and tremendous experience, writes Carol E Lee. “He is highly respected by everyone in the military, and we’re very honoured to have him,” Mr Trump said, with Mr McMaster and acting national security adviser Keith Kellogg by his side.

Mr Trump said Mr Kellogg, who was under consideration for the top job, would resume his role as chief of staff to the National Security Council. He made the announcement from his Mar-a-Lago home in Florida, where he had interviewed at least four candidates for the job over the weekend, including Mr McMaster and Mr Kellogg.

The decision fills a top White House position exactly one week after Mr Trump asked his first national security adviser, Mike Flynn, to resign for misleading Vice President Mike Pence about the nature of his conversations with Russia’s ambassador to the US Mr Trump said Mr Pence had a hand in choosing Mr McMaster.

Mr McMaster now steps in to lead a National Security Council that has largely been in disarray, with many career staffers uncertain about their roles and concerned about a lack of input into the policymaking process on a host of issues, according to administration officials.

The anxiety was stoked in recent days after an NSC staffer who was brought in by the Trump administration was dismissed after he criticised Mr Trump in a private meeting at a Washington, D.C.-based think tank. White House spokeswoman Sarah Sanders said Sunday that anyone who doesn’t support Mr Trump’s agenda “shouldn’t be part of the administration.”

Mr McMaster also is taking the job at a time when several high-stakes foreign policy challenges are under review by the new administration, including North Korea, Syria and Iran. And the move comes amid a cloud of questions about ties between Russia and people close to Mr Trump, which were fuelled by Mr Flynn’s departure.

Mr Trump’s decision ends a search that has raised questions about how much autonomy the new national security adviser would have. Some prospective candidates expressed concerns about how much control they could exert over staffing decisions and process within the NSC.

Those concerns prompted retired Vice Adm. Bob Harward’s decision to drop out of contention, according to people familiar with the decision, as well as retired Gen. David Petraeus, though White House officials have suggested the former director of Central Intelligence Agency wasn’t seriously under consideration.

The White House tried to quell that narrative on Sunday, with spokeswoman Sarah Sanders insisting that the new national security adviser will have “full authority” to make decisions on staffing. And Mr Trump told reporters over the weekend that he had plenty of candidates who wanted the job.

Mr McMaster said he is grateful to Mr Trump for tapping him for the role. “I look forward to joining the national security team and doing everything that I can to advance and protect the interests of the American people,” he said. Mr Kellogg, who said he has known Mr McMaster a long time, called his new boss “a great statesman.”

Mr Trump said the combination of the two men working together “is something very, very special. “This is a great team,” he said. “Our country is lucky to have two people like this. And frankly, after having met so many of the people in the military, we’re lucky to have all of them.”

Others candidates Mr Trump interviewed for the job included former United Nations Ambassador John Bolton and US Military Academy superintendent Lt. Gen. Robert Caslen. Mr Trump said he is considering Mr Bolton for a different role in his administration, though he didn’t elaborate. “We had some really good meetings with him,” Mr Trump said. “He had a good number of ideas that I must tell you I agree very much with. So we’ll be talking with John Bolton in a different capacity.”


Mr McMaster is director of the Army Capabilities Integration Center at Fort Eustis, Va., a part of the Army’s extensive training and doctrine command that is in charge of helping prepare for the future of warfare. 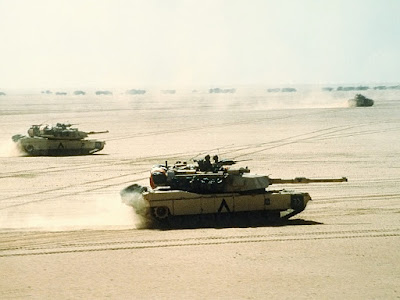 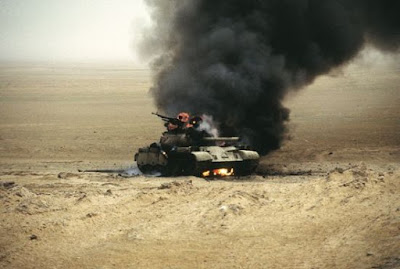