(Burak Bekdil’s article from The GATESTONE INSTITUTE on 05 February 2017.) 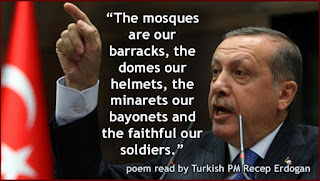 What Turkish Islamists Understand about 'Education': It is customary for Turkish TV crews to interview young students at the start of their mid-term holidays, with the cliché closing question invariably being, "What do you want to be when you grow up?" This year's school holiday in January was no exception. One interview, however, produced a chilling portrait of a girl, aged just 7 or 8.

"I have big goals," she answered the interviewer. "They will get bigger and bigger. Step by step," she said. The girl said she wanted to start by becoming a district or village head. Then a lawmaker, a minister, prime minister and finally the president of Turkey.

Up to this point, TV viewers must have watched her with amusement. Then the reporter asked her: "What would you do if you became the president?" In a calculated, tranquil tone, the girl answered: "I would reinstate the death penalty".


In 2013, then Prime Minister Erdogan's government made it compulsory for students in fourth grade and higher to take up "religion" classes. In religion classes, the Turkish curriculum almost exclusively teaches the virtues of Sunni Islam, but non-Muslim and Alevi students also must attend these classes.

In its latest "Islamist touch" on the education system, Turkey's Education Ministry devised plans to include renowned Turkish and Muslim scientists in its new draft curriculum. Under the plan, works by Muslim scientists will be taught in physics classes, in addition to the works of scientists such as Newton, Einstein and Maxwell.

For instance, ninth-grade students will learn the works of al-Khazini and al-Biruni on density. In their force and motion course, they will learn Newton's laws of motion, but Avicenna's works on the concept of inertia will also be taught.

In tenth grade, students will learn the work of Ismail al-Jazari on hydrostatic balance and al-Farabi's work on sound waves. Other touches of "Muslim science" will be the acoustic features in Mimar Sinan's works of architecture, and Ibn al-Haytham and Averroës' work on optical systems.

In 11th grade, students will learn about the scientific aspects of the 15th century cannon developed by Mehmed the Conqueror. The work of Ismail al-Jazari and the Banu Musa brothers on mechanical systems, such as levers, will also be taught.

Twelfth grade will feature the 15th century scientists Ali Qushji and Ulugh Beg's work on space material and their movements.

The draft, however, is not only about additions, but also about dropping the names of unwanted characters from the curriculum. For instance, it removes all mention of world-renowned Turkish pianist Fazil Say from the 12th grade music class chapter on "Music Culture", which covers Turkey's Western music composers.

Say has been a vocal critic of Erdogan's Islamist policies and was subjected to a controversial and long-lasting blasphemy case, in which he was charged and convicted over tweets in which he quoted the 11th century Persian poet Omar Khayyam, in 2012. Appealing his 10-month imprisonment in the case, which was suspended for five years, Say was acquitted in September 2016 on charges of "insulting religious beliefs held by a section of society".

All that is normal in a country ruled by an Islamist leader who thinks all good belongs to the Muslim culture and all evil to the others. In a 2014 speech at a gathering of Muslim leaders from Latin America, Erdogan claimed that Muslim sailors reached the American continent in 1178 -- exactly 314 years before Columbus. He also claimed that Columbus, in his memoirs, mentioned the existence of a mosque atop a hill on the coast of Cuba.

Where do all these Islamization efforts leave Turkey's education standards? Not, unsurprisingly, in a proud place. The results of the Programme for International Student Assessment (PISA) education test have revealed some of the most pressing problems in Turkish education. According to the PISA findings in 2016, Turkey dropped from 44th place to 49th (out of 72 countries surveyed), compared to the last test in 2012.

Erdogan does not mind. As long as Turks are religiously devout, he thinks, scientific failure will not matter. Better to have a young student like the girl in the TV interview than a thousand bright Silicon Valley-class young innovators.

(Burak Bekdil, one of Turkey's leading journalists, was just fired from Turkey's leading newspaper after 29 years, for writing what was taking place in Turkey for Gatestone. He is a Fellow at the Middle East Forum.) 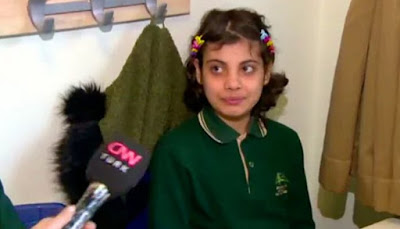 An 11-year-old schoolgirl said during an interview after receiving her first term report card that she wants to become the president of Turkey in order to change the constitution and reinstate the death penalty for coup plotters.

Apparently coached by her parents, the girl seemed to be affected by the political atmosphere in Turkey as she said that she would change the constitution to enable the execution of putschists (plotters of latest coup against Erdogan’s Islamist Government) even though new laws cannot be retroactively applied.

When she was asked how she would become president, the child said that first she wants to be a mukhtar or village/neighborhood head, then a mayor, deputy, minister, prime minister and finally the president.

Speaking to mukhtars in September during a meeting at the presidential palace in Ankara, President Recep Tayyip Erdoğan said he was the chief mukhtar, controlling the entire country, an apparent confirmation of claims that he is seeking to take everything in Turkey under his control. 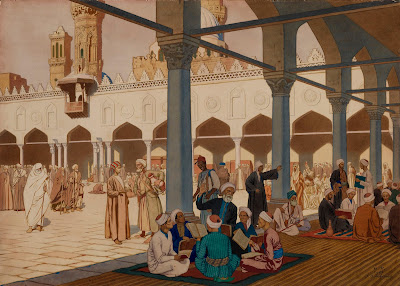 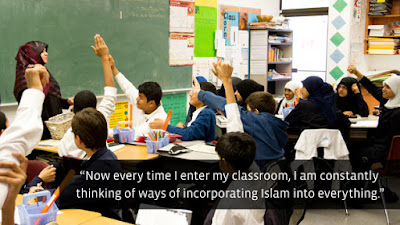