THE HAGUE, Netherlands (AP) — Geert Wilders, the Dutch anti-Islam lawmaker who is at the vanguard of a wave of European far-right populists aiming to take power at elections this year, is pushing ahead with his platform to “de-Islamisize” the Netherlands, despite lawyers saying it could breach the Dutch constitution.

In an interview Thursday with The Associated Press, Wilders insisted that his plans, which include closing the country’s borders to asylum seekers and migrants from Islamic countries, shutting all mosques, and banning the Quran, are legal. And he hinted he could even seek to change the constitution, if necessary.

Wilders says, “a constitution is not something that is (set) in stone and can never be changed.” Wilders’ Party is riding high in polls less than a month before parliamentary elections set for March 15.

Geert Wilders, the wild-haired head of the right-wing Dutch Freedom Party (PVV), launched a new manifesto that calls for the “de-Islamization" of the Netherlands as he leads in the polls to become the next prime minister.

Titled, “The Netherlands is ours again,” Wilders published the one page, 11 point screed on Thursday, highlighting the party’s hard-line positions on Islam. The document, published ahead of a general election in March, calls for the closure of all mosques and Islamic schools, a ban on the Koran, and “no more immigrants from Islamic countries.”

A ban on “Islamic headscarves” in public is also proposed, as well as the prohibition of all “Islamic expressions which violate public order.” All these measures will, Wilders argues, save the country €7.2 bn (US$8bn).

“The PVV is fighting Islam, wants to close the borders of the European Union and all the billions we thus save giving back to the people,” Wilders said in a statement. “My message to Netherlands: Netherlands must again be ours.”

It also targets the European Union with the party promising to hold a referendum on the country’s membership in the EU. The PVV is also calling for spending to be increased in the areas of policing and armed forces while they want “no more money for foreign aid, windmills, art, innovation, public broadcasters.”

Wilders' plans have been described as "utterly bizarre and unbelievable" by the leader of the Christian Democratic Appeal, Sybrand van Haersma Buma. "The program will further polarize Dutch society," he said. 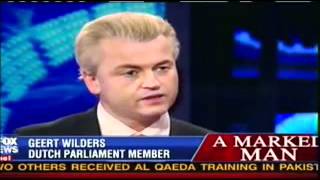 Wilders, who has twice appeared in court for inciting hatred in both 2011 and in March 2016, will emerge as the biggest party following March’s elections, if the opinion polls are to be believed. There is a catch though, with most parties stating they won’t go into coalition with Wilders.

Wilders, who has often been compared to US Republican presidential Donald Trump for both their shared hair styles and immigration policies, attended the four-day US Republican Party convention in July. "I wish we had political leaders like this in the Netherlands who defend their own country... and forget the rest," Wilders said of Trump's bid for the US presidency.

In 2009, Wilders was banned from the UK on public security grounds after his film “Fitna” branded the Koran a "fascist book" and linked it to terrorism, causing much controversy. An immigration tribunal ruling overturned the ban shortly after, however.

The following year, the PVV supported a minority government led by the People's Party for Freedom and Democracy (VVD). This relationship ended in 2012, however, when the PVV pulled their support over austerity measures VVD wanted to introduce. 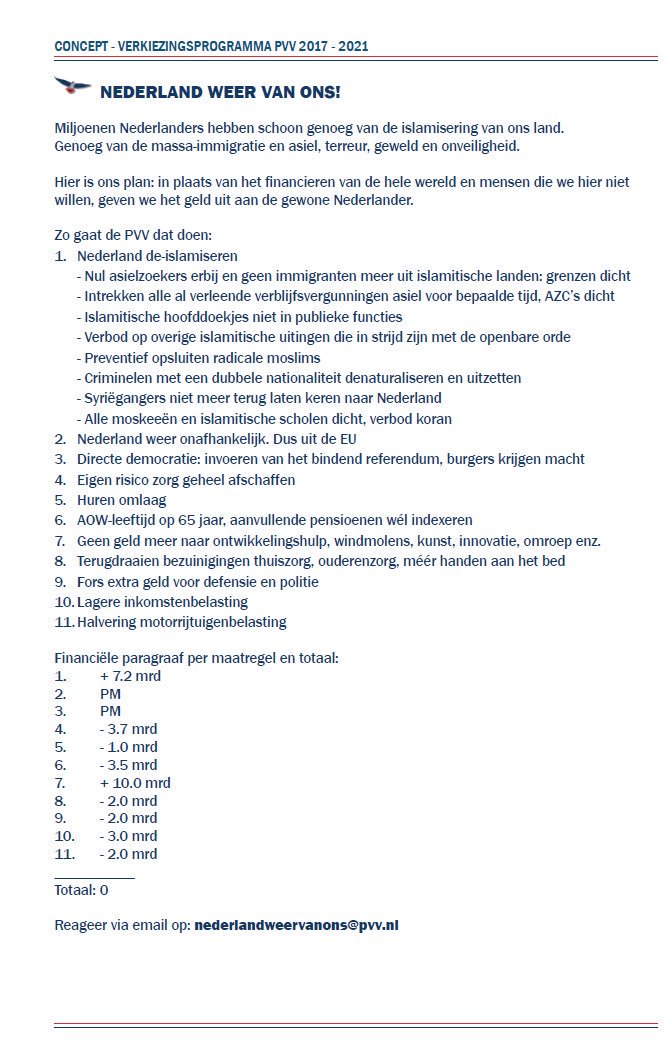 (1400 Shocking Years of Islamization Against Civilization)

THE NETHERLANDS BELONGS TO US!

Millions of Dutch have had enough of the Islamization of our country. Enough of the mass immigration, asylum, terror, violence and lack of safety. Here is our plan: instead of financing the entire world and the people we do not want here, we give our money back to the common Dutch person.

This is what the PVV will do:

- Zero asylum seekers and no more immigrants from Muslim countries: we are closing our borders.
- Withdrawal of all residence permits already granted to asylum seekers; asylum seeker centers closed down.
- No more Muslim veils in public functions
- Ban of overall Muslim expressions that are against the public order
- Preventive incarceration of radical Muslims
- Criminals with double nationality stripped of their Dutch citizenship and deported
- Syrian fighters not allowed back in The Netherlands
- All Mosques and Muslim schools are to be closed and the Koran banned.

2) The Netherlands will reclaim its independence. Therefore, we leave the EU.
3) Direct democracy: binding referendums, citizens have the power.
4) Deductible/excess in healthcare insurance is eliminated
5) Rents to be lowered
6) Age of retirement back to 65 years old. Pensions for everyone.
7) No more money for foreign aid, windmills, art, innovation, public broadcasters, etc.
8) Past budget cuts involving care will be reversed.
9) Plenty extra funds for defense and police
10) Lower income taxes
11) 50% reduction for vehicle ownership taxes 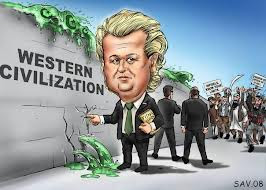 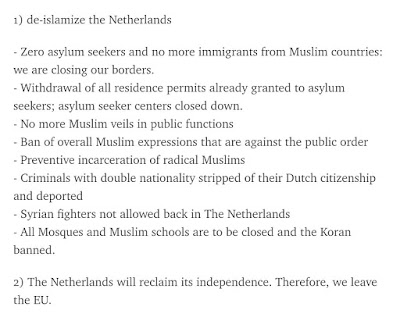