Flynn’s Plan To Destroy Islam In US Starts With Schools 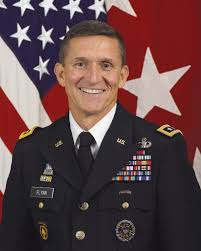 Flynn’s plan to beat radical Islam starts with schools and social media: President Trump’s national security adviser wants to fight not just Islamic terrorists but the “radical ideology of Islam,” and he plans to do it from the grass roots up, starting with our children at schools while also using social media.

Dealing with the global Islamist threat on a tactical level through drone strikes and arrests hasn’t worked, retired Lt. Gen. Michael Flynn argues, according to his largely overlooked 2016 book, “The Field of Fight: How We Can Win the Global War Against Radical Islam and Its Allies.” He wants to combat it more broadly, using informational warfare, among other things, on a scale not seen since World War II.

But first, he writes, the government has to overcome the political taboo of tying Islamic violence to the religion of Islam, including its sacred texts, which he says the enemy is using as a manual of warfare.

Last week, Trump asked Flynn to work with the Pentagon and other security agencies to draft a comprehensive plan to not only defeat ISIS on the battlefield but “delegitimize its radical Islamist ideology,” and have it on his desk by the end of this month.


Advance details of the plan can be gleaned from Flynn’s book. In it, the 33-year Army veteran proposes discrediting the “evil (religious) doctrines” motivating jihadists — namely the Islamic rewards for martyrdom (or suicidal terrorism) and the totalitarian tenets of Sharia law — using psy-ops and counter-propaganda, not just through federal government channels but also through “our schools, media and social networks.”

“If we can’t tackle enemy doctrines that call for our domination or extinction,” Flynn writes, “we aren’t going to destroy their jihadis.” He says in the book that the government may have to draft digital media giants to help “wage ideological warfare” against radical Islam: “We can’t possibly have an effective campaign against Radical Islamic ideology without the cooperation of the likes of Google, Facebook and Twitter.”

He also wants to use radio and TV to conduct psychological warfare. We can’t possibly have an effective campaign against Radical Islamic ideology without the cooperation of the likes of Google, Facebook and Twitter.

“It’s long past time for us to denounce the many evils of Radical Islam,” he writes, while highlighting the many defeats of ISIS and al Qaeda to show potential recruits that “the Almighty has changed sides in the holy war.”

Fired by former President Barack Obama from the Defense Intelligence Agency for taking such stands, Flynn vows to reverse the longstanding government practice of whitewashing the violent nature of the enemy’s faith through pleasant platitudes like, “The terrorists are hijacking a religion of peace” and other apologia. He calls such policies “Islamophilia,” and complains they border on appeasement.

“I firmly believe that Radical Islam is a tribal cult, and must be crushed,” he writes. In his book, Flynn says the Islamist enemy studies our culture “very carefully” and excels at “identifying our weaknesses,” while we, on the other hand, have done very little to exploit weak points in their ideology. We suffer pangs of guilt just “calling them by name and identifying them as fanatical killers acting on behalf of a failed civilization.”

That “failed civilization,” he notes, is Islam, and he says the government must publicly point out its failures, from depressed economies to high illiteracy rates to oppression of women, while supporting “a complete reformation of the Islamic religion” throughout the Muslim world.

He suggests working closely with the president of Egypt, who has called for a renewal of Islam. He also praises reforms pushed by Singapore to convince Muslims that there’s no requirement to follow Sharia in a secular state and that Allah hasn’t blessed jihad against the West. He also cites the half dozen countries that have banned Islamic headscarves around the world.

“We’ve got to get inside the minds of the jihadis” and understand the doctrinal justification for “the cult of killing, the worship of death” and why they, literally, “eagerly drink the blood of their dying enemies,” Flynn writes. What in their scripture brainwashes them into thinking, “We love death more than you love life?” Once that doctrine is exposed, it can be undermined to the point where it loses its potency.

“People need to recognize the strategic power of words and pictures,” Flynn writes. “Ideas, and the words that express them, are very much a part of war, but we have deliberately deprived ourselves of using them.” He proposes using a modern psy-ops unit to wage psychological warfare against radical Islam — not just abroad but at home, in the American Muslim community.

“The war against Radical Islamists must begin at home,” he writes. “Muslims want to apply Sharia law by using our own legal system to strengthen what many believe to be a violent religious law that has no place in the United States,” he writes, adding the government must stop implying Islamic and Western civilizations “are morally equivalent.”

“Let us accept what we were founded upon: a Judeo-Christian ideology built on a moral set of rules and laws,” he writes. “Let us not fear, but instead fight those who want to impose Sharia law and their Radical Islamist views.”

The West overcame the fascist ideology of the Nazis and Imperial Japanese with ruthlessly effective counter-propaganda. Likewise, defeating the jihadists will require discrediting the Islamofascist ideology that catalyzes them. “There has to be an entirely new strategy,” Flynn insists, “because nothing we are doing seems to be a winning strategy” after 15 years of war.

“We can’t win this war by treating Radical Islamic terrorists as a handful of crazies and dealing with them as a policing issue,” he writes. “The political and theological underpinnings of their immoral actions have to be demolished.”

(Blogger’s Notes: I strongly believe what General Michael Flynn is going to do very soon is to rid of all Common Core’s Islamic Textbooks filled with Islamist lies and then teach the school kids the real facts of Islam which basically is a death-cult-ideology masquerading as a religion like Buddhism or Christianity.) 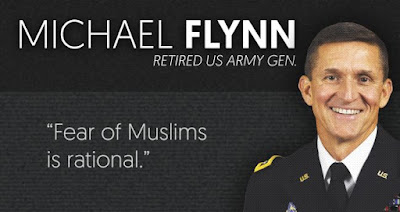 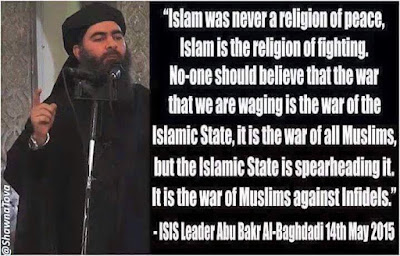 Related posts at following links:
General Flynn: Fear Of Muslims Is Rational
Obama Fired Me For Calling Our Enemies Jihadis
Posted by Hla Oo at 8:18 PM