Their dominance has risen so high that the different units of the Awami League (AL) including Chhatra League, Jubo League, Sechchasebak League and Krishak League are led by the Rohingyas, who are allegedly involved in anti-state activities, locals and a number of AL leaders told the Dhaka Tribune.

The RSO, which reportedly has ties with banned militant group Jama’atul Mujahideen Bangladesh (JMB) and key BNP-ally Jamaat-e-Islami, recently increased its activities by targeting poor Rohingyas in the remote hilly areas and tactfully providing them with food, shelter and training. Afghan instructors were also reported to have been seen at the RSO camps.

According to credible sources, the RSO started regrouping in June 2012 after sectarian violence erupted in Myanmar’s Arakan province where the Muslim Rohingya communities have been persecuted in the Buddhist-majority country.


On June 8 the same year, the group declared Arakan as an independent Islamic state during Friday sermons at Kowarbeel Madrasa in Mongdu (Maungdaw) of Myanmar. Later they beefed up activities in bordering Bandarban and Cox’s Bazar districts to lure the Rohingyas, staying illegally in Bangladesh, to join the outfit.

It is alleged that RSO leaders, among others, were behind the attacks on Buddhist localities and temples in Ramu in September 2012. The mastermind of the attacks, Naikkhyangchhari Upazila Chairman Tofail Ahmed, also a Jamaat leader, has allegedly been under the shelter of the RSO after the attacks, police said.

RSO operatives engaged in fierce battles with the Myanmarese Lutin Force (riot police) in September last year and May this year in Naikkhyangchhari. The Rohingya insurgent group reportedly has training camps in the district’s remote areas where many JMB leaders took training. According to the police, the JMB has bought land in Bandarban to set up shelters and train militants.

Locals say RSO operatives have became populous in the district which has accommodated many Rohingyas since the birth of Bangladesh. At that time, the Rohingyas took shelter in the district with the help of Bangalee Muslims, and now they have become top leaders of different political parties including the ruling Awami League. 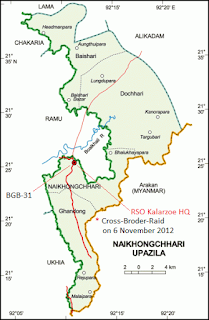 When contacted, Mostafa outright rejected any link with the RSO. “Such allegations are raised only to malign our [Rohingyas involved with AL] image.”

Law enforcers on Sunday arrested five people including two top RSO leaders – Salamatullah and Shafiullah – at a hotel in Chittagong city for their alleged involvement in militant activities. Salamatullah is a Jamaat leader who is locally known as a chief organiser of the RSO in Cox’s Bazar, police said, adding that the detainees were distributing money received from two Saudi financiers. He was also involved in the Ramu attacks.

Previously a leader of Jamaat’s student body Islami Chhatra Shibir, Shafi, is now a leader of the AL’s upazila unit. His father Saleh Ahmed was the founding president of RSO in Naikkhyangchhari upazila. Shafi contested in the union parishad election in 2001 as a Rohingya. At that time, he led the NGO affairs unit of the RSO.

He joined the Awami League in 2010 backed by Bandarban district unit General Secretary Kazi Mujibur Rahman. He became the member secretary of the upazila unit’s convening committee the following year. In 2012, Shafi was nominated as the human resources affairs secretary of the upazila unit. He lost the upazila election the same year to Jamaat leader Tofail. Naikkhyangchhari upazila unit AL’s Senior Vice-President Abu Taher said: “We know since childhood that they are involved with the RSO. And now they lead the outfit.”

Seeking anonymity, another senior leader of the unit said Shafi presented a district unit leader a car as bribe to strengthen his position in the party. During Eid-ul-Azha this year, Shafi distributed 200 cows among the Rohingyas living in different upazilas of Bandarban from funds he had received from Turkish sources, sources said.

Regarding the involvement of AL leaders with the RSO, former convener of the AL Naikkhyangchhari upazila unit, Khairul Bashar said: “These people are dangerous for the party, the country’s independence and sovereignty.”

Kazi Mozibur Rahman, AL’s district unit general secretary, said he was unaware of the matter that Awami League leaders had RSO connections. “If we get any specific allegation against anyone, we will expel them from the party.” The Naikkhyangchhari unit Awami League on Friday formed a human chain in the area demanding Shafi’s immediate release.

Police say militant Salaul was arrested several times in the past but managed to get bail. When contacted, Bodi claimed that he had not been present at the meeting, rather “I came later and assisted the BGB men in arresting the four.” The four detainees were being questioned at the Teknaf BGB camp.

The RSO is a Myanmar-based sectarian outfit, and has connection with several local militant groups including outlawed Jama’atul Mujahideen Bangladesh (JMB). According to police and local sources, Salaul has close ties with the ruling party MPs from Cox’s Bazar and Teknaf, and several other leaders of the BNP and its ally Islami Oikyo Jote.

He recently set up an Islamic centre at Dakkhin Muhuri Para allegedly by grabbing seven acre land of the Forest Department and three acres from the locals. The activities of RSO are operated from this centre, say sources. On the other hand, lawmaker Bodi has long been accused of patronising illegal Rohingya immigrants in his area.

Detectives in November 2014 arrested five militants – RSO leaders Salamatullah and Shafiullah,  the later an Awami League leader in Bandarban; Mohammad Alam, a Pakistani national who is also the vice-president of Global Rohingya Centre (GRC); Saudi Arabia-returned Abdul Majid; and teacher at a Hefazat-e-Islam madrasa Mohammad Amin – from a Chittagong hotel while distributing funds.

Several CMP officials then said that the Bangladesh wing of RSO had been split over share of foreign funds. Before the arrest, the militants were distributing funds among them for donations to mosques, madrasas and providing other facilities for the Rohingyas in Myanmar and Bangladesh.

The officials suspect that RSO is working closely with the local militant groups – JMB, Ansarullah Bangla Team, HujiB and Hizb ut-Tahrir – to materialise their goal of establishing Islamic rule in the country incorporating parts of Myanmar and India.

In December the same year, police arrested Rohingya militants Nur Hossain aka Rafikul Islam, Yasir Arafat and Omar Karim from Dhaka’s Lalbagh with five detonators, two gel explosives and several bomb-making ingredients in their possessions. Police said they had connection with the JMB. The law enforcers also found the involvement of RSO men in the 2012 communal attack on Buddhist temples and houses in Ramu of Cox’s Bazar.

Influential Awami League lawmaker Bodi earlier topped several lists prepared by the police and an intelligence agency of players behind three top criminal activities in Teknaf – human trafficking, yaba smuggling and illegally naturalising Rohingya immigrants, as well as illegal hundi business. He was listed along with 26 of his relatives.

The home minister in September last year, however, claimed that they had not found the involvement of the MP in drug smuggling. Bodi was sued by the Anti-Corruption Commission in 2014 for gaining wealth beyond known sources of income. He is currently on bail in the case.

He had at least 23 cases filed against him at different times. All the charges against him, except for in two-three cases, were withdrawn by the Home Ministry’s committee that dealt with “politically motivated cases.”

Bodi joined politics in 1996 and tried to buy a ticket of the BNP for the controversial February 15 election. Failing to get one, he fought as an independent candidate but lost. He finally got nomination from the BNP for the June 12 election the same year but this time his nomination paper was cancelled.

Soon he joined the Awami League. In 2000 when the BNP-Jamaat government was in power, he was selected an administrator of Teknaf municipality. But he was removed for engaging in conflict with a top Jamaat-e-Islami leader of the area. In 2003, he was elected the chairman of the municipality. He became a member of parliament for the first time in 2008 with Awami League ticket and then in the January 5 election in 2014.

MP Bodi: I was not there

'I have been holding rallies and processions against militancy every day': Controversial Awami League lawmaker from Cox’s Bazar Abdur Rahman Bodi has claimed that he was not present at the meeting from where a special BGB team arrested four people including an RSO militant and a Saudi national in Teknaf on Saturday.

“Under the directive of the prime minister, I have been holding rallies and processions against militancy in my constituency every day. There is no question of attending a meeting with the militants,” Bodi told the Dhaka Tribune Saturday night. The lawmaker from Teknaf-Ukhiya constituency also claimed that the BGB officer, who told newsmen that he was among the participants, himself had not been present during the raid.

A special BGB team carried out the drive at the house of Maulana Syed Karim, the president of Baharchhara union unit Awami League, in Shamlapur area around 3:30pm. “I was at Inani of Ukhiya when the meeting was under way. I went to the spot being informed about the meeting. The BGB members arrested the four militants including a Saudi national in my presence.”

“A party leader from Baharchhara called me over the phone around 11:30am. He asked me to go to Syed Karim’s house where militants were holding a meeting. I was at Inani at that time. When I reached there I saw BGB members led by Assistant Commissioner (Land) Zahed Iqbal cordoned off the house.

“Then I entered the house along with the BGB members and assisted them in arresting the four people including a foreigner,” Bodi told the Dhaka Tribune. Teknaf police chief Abdul Majid last night said that the arrestees – kept at the Teknaf 2 BGB camp – had not been handed over to them.

Meanwhile, BGB chief Maj Gen Aziz Ahmed from a press conference on Sunday said that the four persons were found holding a secret meeting at the house. They were trying to instigate the Rohingyas and distribute money among them illegally.


A statement issued Sunday by the BGB said that some media reports had misquoted its officers as mentioning that MP Bodi had been present at the meeting and he even tried to obstruct the officers from arresting the four. 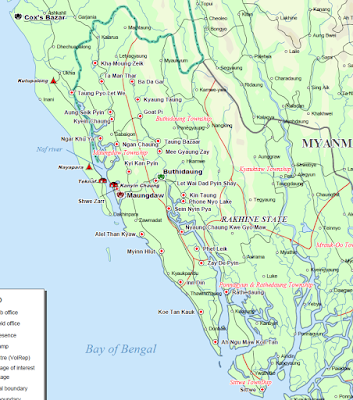 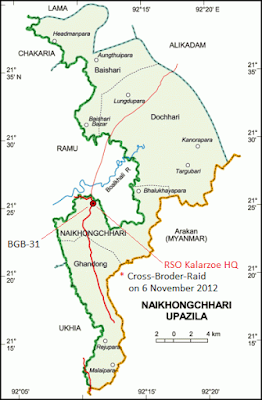