(Candice Jackson’s article direct from The INFOWARS.COM on 07 October 2016.)

THE RAPIST AND THE ENABLER: Hillary Clinton defended a child rapist, and laughed about it. The actions of Hillary Rodham Clinton in a 1975 rape case are being heatedly argued by those on both sides of the Hillary fence, and the discussion compelled me to undertake a review of the tale of the rapist and the enabler.

The rapist in this case was a monstrous, violent criminal named Thomas Alfred Taylor. The enabler was Hillary Rodham. Why am I calling Rodham the enabler? It is well documented that after marrying Bill Clinton, Hillary was in the position of knowing her husband’s brutal pattern of sexual assault and rape against numerous women.

In more than a dozen cases Hillary went much further than just turning a blind eye to this systematic abuse of women — by attacking the credibility of her husband’s victims, and through vicious, calculated intimidation tactics forced many of the victims into silence, thus enabling her husband to continue as a serial rapist.


What has that got to do with a criminal case from 1975 just months before she married Bill? Read on. The link is Hillary’s strategy of blaming and attacking the credibility of the victims.

In the rape case of defendant Taylor, defense attorney Rodham concocted a pack of lies in the May 1975 affidavit which she wrote and then entered into evidence to discredit the 12-year-old victim, Kathy Shelton. Twelve years old!

In the affidavit Hillary wrote, “I have been informed that the complainant is emotionally unstable with a tendency to seek out older men and engage in fantasizing. I have also been informed that she has in the past made false accusations about persons, claiming they had attacked her body. Also that she exhibits an unusual stubbornness and temper when she does not get her way.”

Hillary also wrote that a child psychologist had said to her that children in early adolescence “tend to exaggerate or romanticize sexual experiences,” especially when they come from “disorganized families, such as the complainant.”

In an exclusive 2014 interview with Josh Rogin of the Washington Free Beacon, Kathy Shelton, now in her early ‘50s, vigorously denied Clinton’s accusations and said there has never been any explanation of what Clinton was referring to in that affidavit. She insists she never accused anyone of attacking her before her rape. 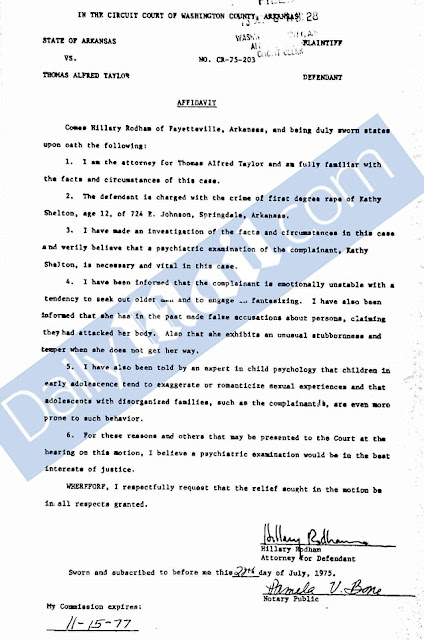 “I’ve never said that about anyone. I don’t know why she said that. I have never made false allegations. I know she was lying,” she said. “I definitely didn’t see older men.” Yet Hillary Rodham put this young girl through so many interrogations and examinations of her “mental state” that Kathy was left traumatized and in tears for days at a time.

Through actions like these, Clinton was able to get prosecutors to accept a plea to the lesser charge of unlawful fondling of a child. Kathy, then only twelve years old, was a virgin before she was raped by Taylor (and another uncharged young man who accompanied Taylor in the rape). She spent five days in a coma and months recovering from the beating that she received during the rape, and more than ten years in therapy. Doctors informed her that she would never have children.

After the trauma of the rape itself, Hillary Rodham then traumatized this young girl further by employing tactics to blame the victim and place the guilt for the crime on Kathy rather than on the monstrous criminal. Not exactly the tactics one would expect from a self-proclaimed feminist and champion for women; in fact, these are precisely the blame-the-victim tactics now outlawed in most states by “rape shield laws” that feminists spent decades fighting for, to protect rape victims from being blamed for “bringing it on themselves.”

There is evidence that Clinton knew her client was guilty – and laughed about it. As an attorney, I fully understand and embrace our justice system’s commitment to providing every accused criminal with a competent defense. I understand that it is the sworn duty of a defense lawyer to defend her client zealously.

However, Hillary’s actions speak to a deeper truth of moral bankruptcy and utter lack of respect for anything approaching “women’s rights” or compassion for children. This rape case shows Hillary’s raging ambition to reach ever higher no matter how many bodies are left behind.

In a taped interview archived at the University of Arkansas, reporter Roy Reed recorded this admission from Clinton; “He [Taylor] took a lie detector test. I had him take a polygraph, which he passed, which forever destroyed my faith in polygraphs.” Clinton then chuckles and brags about getting the only piece of physical evidence thrown out of court.

The charge of rape carried a maximum thirty year prison sentence, but Hillary Clinton succeeded in getting this violent rapist a marginal sentence of time served and a work release program so that he served only a couple of months in jail.

Oh, and as if moral corruption weren’t enough, this foul case is also tainted with financial corruption: the judge in that trial, using his son as a go-between, was a donor to the 1974 Clinton for Congress campaign.

Shortly after this rape case, Hillary married Bill and began her decades-long pattern of trampling on the lives and dignity of women in order to assure her own political gains.

Hillary Rodham Clinton’s anti-woman victimization and enabling of rapists and sexual predators began forty years ago and continues to this day. Her female victims like Kathy Shelton know the truth about her real record on women’s rights – will the rest of America see the real Hillary before it’s too late?


(Candice Jackson is the lawyer for Kathy Shelton.) 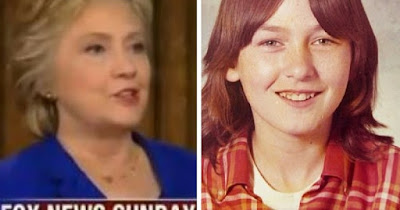