The King's Death Points To Thailand's Paradox: Two women cry as they pray for Thailand's King Bhumibol Adulyadej outside Siriraj Hospital in Bangkok on Thursday. The king's death was announced shortly afterward. The world's longest reigning monarch, the king was on the throne for 70 years.

Here's one image of Thailand: A magnet for Western tourists. One of Asia's more dynamic economies. The land of smiles. And until Thursday, home of a beloved monarch who united Thais throughout his 70-year reign.

And here's another view: A coup-plagued nation where the military ousted an elected government two years ago and suppresses dissent. A country accused of human rights abuses. A land with an authoritarian undercurrent where anyone can be jailed for a negative comment about the royal family.

So which one is the real Thailand? Answer: they both are, and often on the same day.

The death of King Bhumibol Adulyadej at age 88, after years of failing health, illustrated this Thai paradox and raises fundamental questions about where the Southeast Asian nation is headed now that he's gone.


The nation grieved over the loss of the king, who assumed the throne in 1946, when Thailand was a sleepy backwater. He presided over its dramatic development into a modern, sophisticated, outward-looking state. Shortly before his death was announced, hundreds of Thais gathered outside Bangkok's Siriraj Hospital. They prayed, burned incense and clutched photos of him. "I really love my king because he's done so many things for Thailand," said Anpan, a 32-year-old woman who lives in Bangkok. "He's worked tirelessly for our country."

As a constitutional monarch, he remained far above the fray of daily politics, yet was also known as a ruler who could roll up his sleeves, walk into a rural village and connect with ordinary Thais. His gold-framed portrait was omnipresent, from skyscrapers in Bangkok to bamboo huts in the country's most remote corners.

His royal touch does not appear to have passed to his son and successor, Crown Prince Maha Vajiralongkorn, 64. The crown prince is not publicly criticized due to the strict laws protecting the monarchy. But in private conversations, many whisper that he doesn't live up to his father, or for that matter, a much-loved sister. 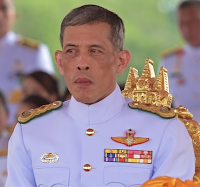 Thailand's Crown Prince Maha Vajiralongkorn attends an event in Bangkok on May 13, 2015. He is expected to succeed his father, King Bhumibol Adulyadej, who died Thursday at age 89. But the crown prince, who is in his mid-60s, has never achieved the popularity of his father.

Married and divorced three times, the crown prince has lived for extended periods abroad, mostly near Munich, Germany. He had a poodle named Foo Foo, which held the rank air chief marshal until its death last year, according to media reports.

"He has not shown any interest in the development of Thailand, in the institution itself and how it should be shaped. There are a lot of bad stories, his misbehavior in past, people not only dislike him, they fear him and that's a recipe for a real disaster if he's not kept in check," says Paul Handley, the author of The King Never Smiles, a 2006 book on the monarchy that's banned in the country.

The royal succession also draws renewed attention to the country's military rule. Gen. Prayuth Chan-ocha, who was the army chief, led a 2014 coup. He is now prime minister.

The Economist summed it up nicely: "Esteem for the monarchy has made it easier for Thailand's meddlesome army to excuse its frequent coups. It is widely assumed that the succession could tilt the balance in a deep feud which has roiled Thailand's politics for ten years — a sporadically violent class war of sorts that has pitted middle-class urbanites against the rural poor, and which in 2014 brought a particularly oppressive junta to power. The question on everyone's lips is, in which direction?"

Thailand has had so many coups that there's no consensus on exactly how many there have been. It's around a dozen, in addition to many attempted coups since Thailand went from an absolute monarchy to a constitutional monarchy in 1932.

The economy has expanded for decades (aside from a wrenching financial crisis in the late 1990s) and while Thailand has had occasional upheavals, it has never suffered a major war, either at home or with a neighbor.

But its domestic politics have always been messy, oscillating between competitive elections and a press that's mostly free to military control where the generals impose rules as they see fit. The king generally remained in the background, though he intervened decisively when it appeared events might be spiraling out of control.

This pattern has played out time and again. Eventually the generals decide that they can return to the barracks and let the politicians have another shot at running the country. All the while, the economy tends to hum along. Foreign companies keep investing, tourists keep flocking to the beaches.


But Thailand is now facing a transition it hasn't had to make in seven decades. Paul Handley, the biographer of the monarchy, says Thailand needs a king who can modernize the throne, put an end to military coups and use his authority to restore democracy and make it durable. And that's a tall order. 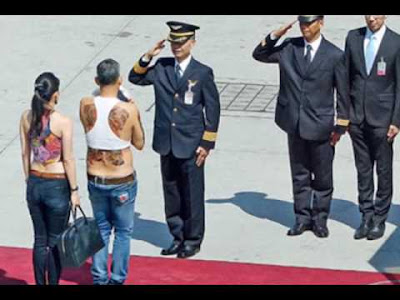 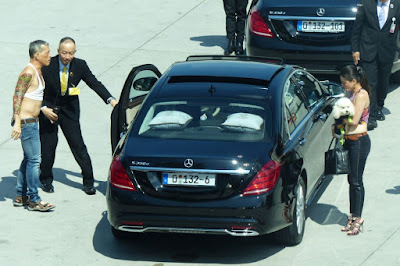 What’s going on in Thailand?

With the passing of King Bhumibol Adulyadej, Rama IX, his son and heir apparent, Crown Prince Maha Vajiralongkorn, should have been named King Rama X. He hasn’t. As Andrew MacGregor Marshall writes, Thailand’s succession struggle isn’t over yet.

Thailand now is a kingdom without a king. Following the death of Bhumibol Adulyadej last Thursday after 70 years on the throne, it was widely expected that his wayward and controversial son Vajiralongkorn would be proclaimed King Rama X the same day.

Instead, Thai dictator Prayuth Chan-ocha told the nation that the crown prince was not ready to be monarch. As I explained in a previous note, this has created an unprecedented succession crisis — for the first time in the history of the Chakri dynasty, Thailand looks set to be without a king for an extended period of time.

Junta leader Prayuth has told the nation that Vajiralongkorn himself asked for a delay in becoming king because he wanted time to mourn Bhumibol. This is not a credible explanation. The crown prince was never close to his father, and Bhumibol had effectively been brain dead for months. Princess Sirindhorn, who of all the royal children was closest to Bhumibol, was back at work on Monday performing royal duties. Whatever the reason for the delay in Vajiralongkorn becoming king, it is not because the crown prince is too sad to reign.

Information from multiple sources with links to the palace and the extended royal family suggests that a secret struggle over royal succession that has simmered beneath the surface of Thai politics for years is not yet over — and this is why Vajiralongkorn has not yet been proclaimed king. In particular, the scheming 96-year-old royalist former general Prem Tinsulanonda is trying to force the crown prince to accept curbs on his rule.

Prem has been a bitter enemy of the prince for decades — their mutual enmity dates back to when Prem was prime minister between 1980 and 1988. Prem’s conservative royalist network, along with so-called royal liberals in Anand Panyarachun’s circle and the Bangkok faction of the Democrat Party have been plotting for years to try to prevent Vajiralongkorn becoming king. The conflict intensified after 2005 due to palace concerns about Vajiralongkorn’s apparent alliance with populist demagogue Thaksin Shinawatra.

Prem masterminded a military coup in 2006 that was largely aimed at undermining Vajiralongkorn’s succession prospects and sabotaging his ties with Thaksin. His influence began to wane as it became clear that the coup was a debacle that had caused irreparable damage to the image of the monarchy. In recent years he was regarded as a mostly spent force, with Prawit Wongsuwan becoming the most powerful royalist military godfather pulling strings from behind the scenes. But Prem, Anand and other senior royalists remained implacably hostile to the crown prince, as a leaked US diplomatic cable from 2010 showed.

Despite his advanced age, Prem has staged a remarkable comeback in recent months. During August and September he managed to convince Prayuth to allow the appointment of Chalermchai Sittisart — a general loyal to Prem — to the crucial strategic position of army chief. As I wrote in a previous note on royal succession last week:

The logic of putting General Chalermchai Sittisart in this position was to try to placate Prem and his allies, as well as military factions resentful of the Eastern Tigers, and prevent a counter-coup during the royal succession process.

Vajiralongkorn was persuaded to enter into an uneasy alliance with his old enemy. If Prem still secretly intends to try to launch a succession surprise, however, the appointment of his ally as army chief gives him control of a strategically crucial position.

Now it seems Prem has indeed launched his suprise. As Bhumibol’s health dramatically deteriorated last week, Prem and his sidekick Surayud Chulanont sought to force the crown prince to accept some kind of compromise. According to multiple sources, the reason that Prayuth cut short a visit to Chonburi and rushed back to Bangkok last Wednesday was for a tense meeting with Prem and Vajiralongkorn, who had just returned from Munich and landed at Suvarnabhumi Airport at 12:30 pm on Thai Airways flight TG923 from Frankfurt.

Prem was still pushing for Crown Princess Maha Chakri Sirindhorn to be named the next monarch, but this was rejected by Vanjiralongkorn and Prayuth. Prem then proposed that the crown prince’s eldest daughter Princess Bajrakitiyabha be named monarch. Again, this was rejected. The standoff remains unresolved, and this is why the junta announced that Vajiralongkorn wants to delay becoming king — negotiations are continuing. It is telling that Vajiralongkorn has said nothing publicly, with Prayuth claiming to be speaking on his behalf.

Prem’s position as regent and significant influence over the army have given him some leverage, but he is pursuing an exceptionally risky strategy. According to several sources it appears extremely unlikely that he can prevent Vajiralongkorn becoming king, and negotiations are now focusing on the possibility of reviving the old position of uparaja, or deputy monarch. Prem wants Sirindhorn to be uparaja, to act as a curb on Vajiralongkorn. The crown prince has countered with a suggestion that his elder sister Ubolratana be deputy monarch. As of now, the negotiations remain deadlocked and Thailand has no king.

The contested succession may end up doing even more damage to the monarchy, at a time when many Thais are questioning whether the palace has any worthwhile role in post-Bhumibol Thailand.

(Andrew MacGregor Marshall is a journalist, lecturer at Edinburgh Napier University, and author of A kingdom in crisis. Follow him on Twitter and Facebook. This article was first published to his Facebook page on Tuesday, 18 October 2016.

New Mandala Editor’s note: According to a Bangkok Post report, Prayuth Chan-ocha said on Tuesday that Crown Prince Vajiralongkorn will be named king after 15 days of mourning. We watch this fast-changing story with growing interest.)