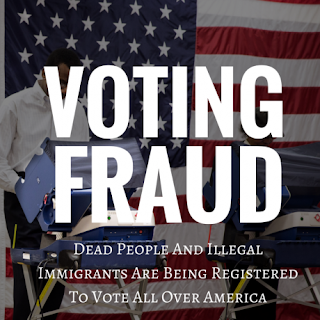 Adams, who was the Voting Section Attorney at the US Department of Justice, filed six suits in the past year against Philadelphia and Broward County, Florida where the voter rolls are corrupted. Adams said he had one case in Texas where the person died in 1944. Far left groups continually sue to keep the voter rolls the way they are. The Obama administration has no desire to clean up these voter rolls.

J. Christian Adams serves as President and General Counsel of the Public Interest Legal Foundation. He is also the founder of the Election Law Center, PLLC. He served from 2005 to 2010 in the Voting Section at the United States Department of Justice. He is the author of the New York Times bestseller Injustice: Exposing the Racial Agenda of the Obama Justice Department which examines the Department’s election and voting rights record.  He litigates election law cases throughout the United States and brought the first private party litigation resulting in the cleanup of corrupted voter rolls under the National Voter Registration Act of 1993.

Washington (CNN): Rudy Giuliani backed up Donald Trump's claim that the election could be rigged. Giuliani said fraudulent votes could make a difference in narrow races. Top Donald Trump adviser Rudy Giuliani claimed Sunday that Democrats could steal a close election by having dead people vote in inner cities, while vice presidential candidate Mike Pence said the ticket will "absolutely accept the result of the election."

"I'm sorry, dead people generally vote for Democrats rather than Republicans," the former New York City mayor told CNN's Jake Tapper on "State of the Union." "You want me to (say) that I think the election in Philadelphia and Chicago is going to be fair? I would have to be a moron to say that." 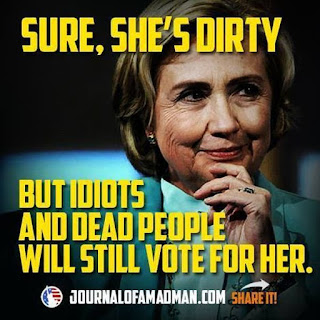 But he did say the amount of cheating would only impact extremely close races -- noting, for example, if either Trump or Hillary Clinton won Pennsylvania by "5 points," the cheating he alleges would occur would be negligible and not change the outcome. Giuliani was backing up Trump, the Republican nominee, who has repeatedly claimed on the campaign trail -- without providing evidence -- that his race against Clinton is being rigged.

But Pence told NBC's Chuck Todd on "Meet the Press" that he will accept the Election Day results. "We will absolutely accept the result of the election," he said. "Look, the American people will speak in an election that will culminate on November the 8. But the American people are tired of the obvious bias in the national media. That's where the sense of a rigged election goes here, Chuck."

Tapper pushed back on Giuliani, saying even Republicans had debunked the conspiracy theories pushed online that low vote totals in Philadelphia in 2012 for Mitt Romney were the result of a rigged process.

Giuliani said as a prosecutor, he remembers an election in Chicago in which 720 supposedly dead people voted -- and that 60 dead people cast ballots in his own mayor's race. He said elections fraud would only make a difference in a 1 to 2 percentage point races.

He also said that only Democrats do it, because it happens in inner cities. "I can't sit here and tell you that they don't cheat. And I know that because they control the polling places in these areas. There are no Republicans, and it's very hard to get people there who will challenge votes. So what they do is, they leave dead people on the rolls and then they pay people to vote as dead people, four, five, six, seven" times, Giuliani said.

Tapper said: "I think there are a lot of elections experts that would have very, very strong disagreements with you." Giuliani responded: "Well then they never prosecuted elections fraud."

Newt Gingrich, the former House speaker and also a top Trump ally, said on ABC's "This Week" that Trump's concerns about election rigging are "not about election officials at the precinct level." However, he also urged Trump voters to monitor polling stations.

"I remember when Richard Nixon had the election stolen in 1960, and no serious historian doubts that Illinois and Texas were stolen. So to suggest that, we have, you don't have theft in Philadelphia is to deny reality," Gingrich said.

Hundreds and Hundreds of Dead Voters Found Voting in California

An investigation by CBS News’ Los Angeles-based affiliate, KCAL-9, has determined that “hundreds” of dead people are still voting in California. “CBS2 compared millions of voting records from the California Secretary of State’s office with death records from the Social Security Administration and found hundreds of so-called dead voters,” according to investigative reporter David Goldstein.

“Specifically, 265 in Southern California and a vast majority of them, 215, in Los Angeles County alone.” The voters are genuinely dead, but others are voting in their names, often through vote-by-mail. 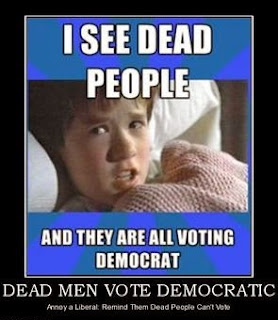 While it is not clear how the “so-called dead voters” voted, 86 were registered Republicans, and 146 were registered Democrats. Votes have been cast on behalf of some dead individuals for decades, over several election cycles. Their votes diluted the votes of living people, whose choices count less when weighed against votes cast fraudulently.

The possibility of voter fraud in Southern California is a particularly acute problem in the run-up to the June 7 California primary, where the presidential campaigns of Sen. Bernie Sanders (I-VT) and former Secretary of State Hillary Clinton are focused on vote-rich Los Angeles and surrounding areas.

Roughly two-thirds of primary ballots are expected to be cast by mail. California does not have a photo ID requirement to vote, and is the only state out of compliance with the Help America Vote Act of 2002, Goldstein says, making voter rolls less accurate.

“The problem is California has been the most derelict state in the country in implementing statewide databases that are required under federal law. They just blew it off for over a decade,” former Department of Justice attorney J. Christian Adams told Goldstein.

The Obama administration has consistently argued that new laws to improve ballot security and voter transparency, like voter ID, are racist efforts to exclude minorities, and are unnecessary because voter fraud rarely happens. The Los Angeles County Board of Supervisors decided Tuesday to launch an investigation into the problem following KCAL-9’s report.

Independents and so-called “anti-establishment” voters have had much to say about the presidential race so far. But could illegal immigrants and other non-citizens ultimately decide the contest? One elections expert said that is a distinct possibility.

“My biggest fear in the upcoming election is people who are not U.S. citizens registering and voting and potentially making a difference … if we have a close election,” said Hans von Spakovsky, senior legal fellow in The Heritage Foundation’s Edwin Meese III Center for Legal and Judicial Studies. 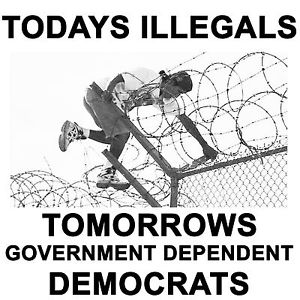 The former Federal Election Commission member pointed to cases across the country, particularly in high illegal immigrant entry point states, where non-citizens have been caught registering and voting in elections. The numbers are alarming. An academic report published in the December 2014 issue of Electoral Studies found more than 14 percent of non-citizens in 2008 and 2010 samples reported being registered to vote.

The data was drawn from the Cooperative Congressional Election Study, which included 32,800 observations in 2008 and 55,400 in 2010. The data pool provides “sufficient samples of the non-immigrant sub-population, with 339 non-citizen respondents in 2008 and 489 in 210,” the authors wrote. “Most non-citizens do not register, let alone vote. But enough do that their participation can change the outcome of close races,” the researchers wrote in the Washington Post.

In a tight presidential contest, 2.2 percent of non-citizens voting  – and certainly 6.4 percent  – could make a difference in the outcome of the election. The vast majority of non-citizen votes went to Democratic candidates, according Earnest and Richman. The study does not provide definitive total vote numbers, and the study’s methodology has been criticized inside and outside the scientific community. The authors stand by their research.

Von Spakovsky said the Obama administration’s Department of Justice is turning a blind eye to the problem – by design. The elections expert has personal experience with the federal government’s lax oversight. He served on a Virginia county elections board that found nearly 300 non-citizens registered to vote in that county alone.

“We took them off the list. About half of them had actually illegally voted,” Von Spakovsky told Wisconsin Watchdog on the Vicki McKenna Show earlier this week. “We sent that information to the Obama administration, to the Justice Department, because it’s a felony what (the non-citizens) were doing under federal law.”

“They had no interest in it.”

The Justice Department, in fact, has targeted states that have attempted to purge ineligible voters from their registration rolls, citing the Voting Rights Act and the National Voter Registration Act. And the U.S. Department of Homeland Security has refused to share its immigration database with election officials. 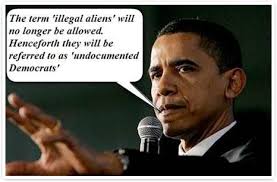 Proponents of expanded voter rolls accuse critics of fostering a dark conspiracy that voter fraud lurks around every election booth. They sound very confident that voter fraud has been wiped from the map of fair and open elections.

Wendy Weiser, director of the Democracy Program at the left-wing Brennan Center for Justice, in 2012 declared that voter fraud claims generally amount to “smoke without any fire.”

“Voter fraud would be a real problem if it actually happened. It’s a serious crime, and one that can undermine our democracy. Fortunately, it’s a crime we have largely figured out how to prevent,” she wrote in U.S. News & World Report. She pointed to a South Carolina case in which a review found that complaints about more than 900 dead people voting in elections turned out to be nothing more than “clerical errors, bad data matching, and stray marks on scanners.”

But in many cases, efforts to track voter fraud have been pushed aside by opponents who charge that such campaigns are politically driven, even “racist.” Case in point, Milwaukee in 2004. The city formed a task force to look at incidents of voting irregularities. “Apparently it was so embarrassing that city officials dismantled it after it came out with a very critical report that showed all kinds of discrepancies and potential fraud and other things,” Von Spakovsky said.

While 33 states, including Wisconsin, have enacted voter ID laws, he said that’s just a good first step in preventing fraud in the elections system. He said proof of citizenship will be critical in making sure non-citizens aren’t allowed to determine the outcome of the 2016 elections. Again, the Obama federal government is fighting the states trying to enhance those efforts.

Most Democrats Believe Illegals Should Be Allowed To Vote

Are voters ready to let illegal immigrants vote? A sizable number, including most Democrats, are. The latest Rasmussen Reports national telephone survey finds that one-out-of-three Likely U.S. Voters (35%) now believes that illegal immigrants should be allowed to vote if they can prove they live in this country and pay taxes. Sixty percent (60%) disagree, while five percent (5%) are undecided.


Fifty-three percent (53%) of Democrats think tax-paying illegal immigrants should have the right to vote. Twenty-one percent (21%) of Republicans and 30% of voters not affiliated with either major political party agree. 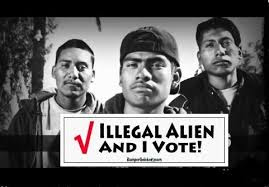