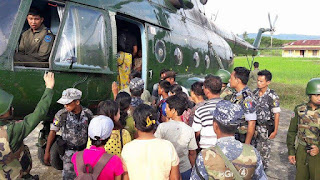 AS his unofficial and voluntary promise on October-9 to protect Burma’s western border with Bangladesh at any cost Senior General Min Aung Hlaing has personally sent one division of crack troops into Maungdaw District while ASSK’s Union government is still telling people not to blindly and falsely accuse any group especially the hated Bengali-Muslim illegals (so-called Rohingyas) on the devastating attacks on Burma Police BGP border posts on October-9.

SG Min Aung Hlaing has also sent in at least ten Russian-made helicopter gunships to rescue thousands of Buddhist teachers and government employees trapped as refugees in scattered Yakhine Buddhist villages amidst overwhelming Bengali-Muslim villages after October-9 attacks. Those teachers and government employees normally were serving in the schools and clinics and government offices located inside Bengali-Muslim villages. Since October-9 they had fearfully abandoned their workplaces and taken refuge in nearby Yakhine-Buddhist villages.

While ASSK and Kofi Annan-led so-called Yakhine State Advisory Commission sitting nicely on their asses in Naypyidaw and Rangoon are busy sending various fact-finding missions to investigate who and which group really were behind the October-9 attacks Burmese army and police forces have been busily working hard raiding Bengali-Muslim villages last few days to recover the stolen war-weapons and catch the culprits behind the attacks as they do not need to thoroughly investigate who really the culprits as our army and local police force had already known who the attackers exactly were and where they are from and even where they lived.

On October 10 and 11 Burmese army units entered Myo-thu-gyee, Yay-dwin-BYin, and U-Chint Muslim villages in Maungdaw-North are and cleared the Bengali resistance armed with stolen police-guns. Altogether 15 Muslim insurgents were killed and several stolen police-weapons and ammunitions were recovered.

Another operation was made in the Bengali-Muslim village of War-bate on October-13. One stolen police-gun and more than a thousand rounds of ammo were recovered from the village ruins after the Muslim terrorists burned down their own village and fled towards Bangladesh.

Similar operations were made against several Bengali-Muslim villages suspected of harbouring Jihadis from Bangladesh and the local villagers taking part in October-9 attacks on BGP stations across the Maungdaw District. According to unofficial sources altogether 40 Muslim terrorists were killed and more than 200 were captured and now being detained and interrogated in Sittwe Prison. 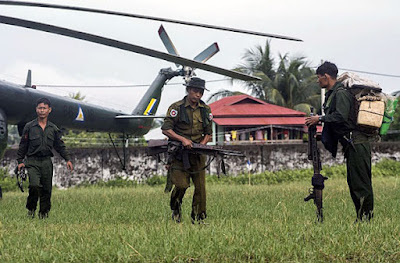 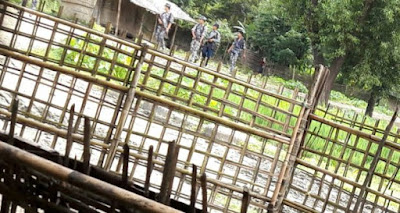 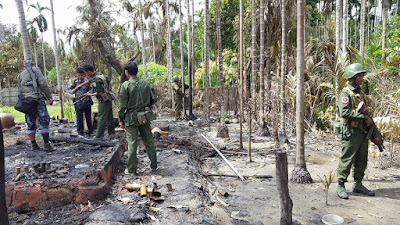 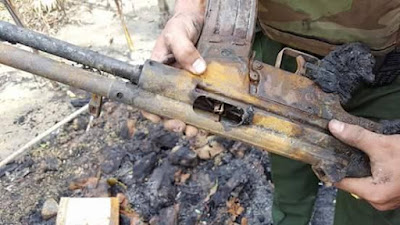 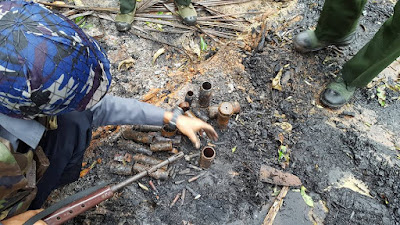 "We used to live together with (Muslims) like family," said the 62-year-old, a Buddhist ethnic Rakhine, as she stirred curry inside her tiny kitchen in the village of Warpaik. "They used to come to my shop. They used to work inside the (border post)," she told AFP, which has changed her name to protect her identity.

But in the early hours of last Sunday men wielding guns, machetes, and homemade weapons stormed the nearby Kyikanpyin border post and two others in the area. All told, nine police were killed, state media said.

"About 500 or 600 Muslims attacked in three places," she said, though state media put the number of attackers at 90. "About 40 of us ran up a nearby hill with the children. We got hurt because we slipped and fell down as we ran," she said, showing injuries to her foot. "They were shooting with guns. They only ran away when soldiers arrived. If soldiers hadn't come, we would have all been killed." 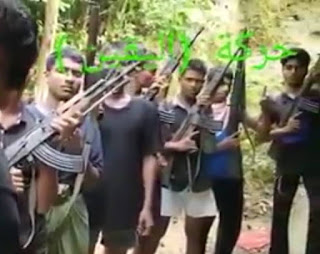 Attackers returned three days later to Warpaik, setting fire to more than two dozen bamboo houses. The destroyed homes still smouldered when AFP journalists visited on Friday, the burnt out shell of a bicycle left among the ruins of one house.

Photos of a teenage boy in an Islamic skullcap also were scattered on the ground, one showing him proudly astride a scooter. Nearby was a stained and torn list of Muslim household members.

Myanmar's president has blamed jihadists from a previously unknown group called Aqa Mul Mujahidin, saying its leader was trained by the Pakistani Taliban and funded by Middle Eastern organisations. A statement from his office said the group had for months promoted "extremist violent ideology among Muslims in the area" and ran secret training sessions in the hills and forests.

Moe Moe said she recognised three Muslim attackers from videos circulating on social media appearing to show armed Rohingya men calling for Muslims worldwide to rise up in jihad. She knew the names of three of them and said others also had frequented her food stall.

With officials warning of more attacks, and food supplies running short under the lockdown, Moe Moe is considering leaving the village where she has lived for 24 years. "I'm still very scared. My relatives have asked me to move back (south). I am thinking I will."

Army also sent in at least ten helicopter gunships into the troubled Maungdaw-north area and airlifted out nearly 2,000 teachers mostly females back to Maungdaw town and then to their homes all over the Yakhine State.


On October-13 three helicopter gunships in several trips managed to airlift 90 teachers trapped inside Taungbyo-letwel Muslim village under the protection of small BGP patrol. One medivac helicopter was also sent to Maungdaw from Sittwe to treat several wounded teachers. 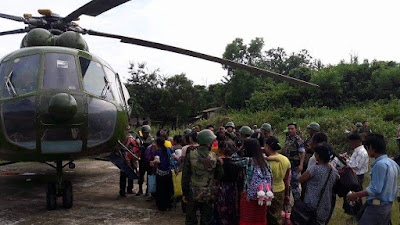 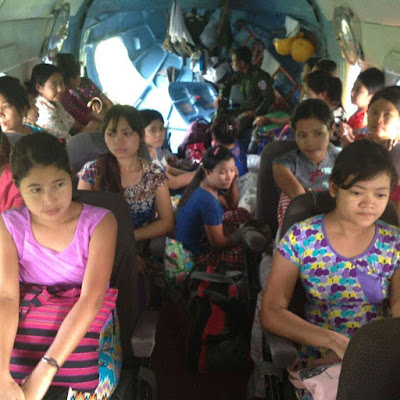 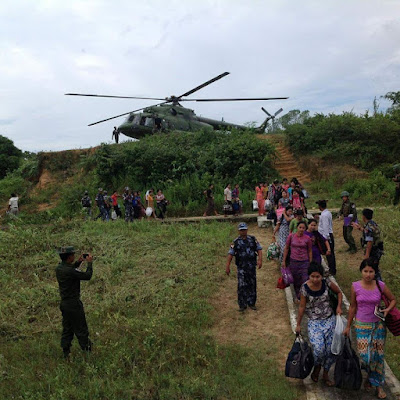 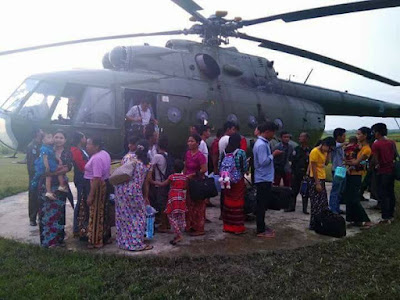 Two more Rohingya terrorists, Kamal and Yousuf their names, with gunshot wounds fleeing from the pursuing Burmese army units were caught by Bangladeshi BGB at a border crossing. After an emergency treatment of their flesh wounds the two were handed back by Bngladeshi authorities into the hands of Burmese officials on Tuesday October-11. Those two were also being detained and interrogated at Sittwe Prison. 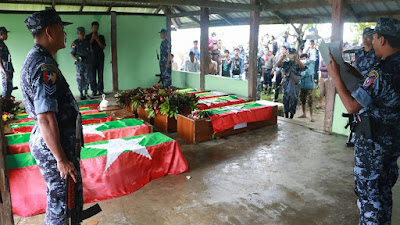 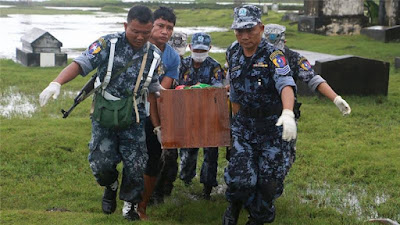 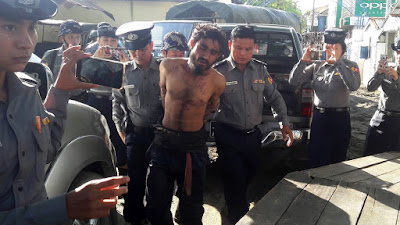 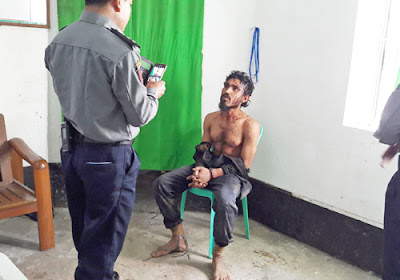