(Staff article direct from The BARE NAKED ISLAM on 08 October 2016.) 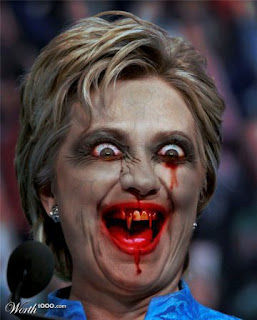 Do you really want to elect a president who has so much contempt for the people who protect her life? Hillary Clinton routinely bullied her protective detail, including the Secret Service and State Department Security — and she did it with the worst language possible, according to a just-released summary in National Review of an FBI interview with a former State Dept official.

She was so abusive, many agents sought reassignment elsewhere. By the end of her tenure, it was nearly impossible to find any senior agents willing to work for her. Imagine what she says about ordinary Americans.

Following are her abusive diatribes to her own security details:

(1) “Where is the God damn flag? I want the God damn fucking flag up every morning at fucking sunrise”. Hillary to staff at the Arkansas Governor’s mansion on Labor Day 1991. From the book “Inside the White House” by Ronald Kessler, p. 244

(2) “Fuck off! It’s enough I have to see you shit-kickers every day! I’m not going to talk to you, too! Just do your Goddamn job and keep your mouth shut.” Hillary to her State Trooper bodyguards after one of them greeted her with “Good Morning.” From the book “America Evita” by Christopher Anderson, p.90


(3) “If you want to remain on this detail, get your fucking ass over here and grab those bags!” Hillary to a Secret Service Agent who was reluctant to carry her luggage because he wanted to keep his hands free in case of an incident. From the book “The First Partner” p. 25

(4) “Stay the fuck back, stay the fuck back away from me! Don’t come within ten yards of me, or else! Just fucking do as I say, Okay!!?” Hillary screaming at her Secret Service detail. From the book “Unlimited Access” by Clinton ‘s FBI Agent-in-Charge, Gary Aldridge, p.139

(5) “Where’s the miserable cock sucker?” (otherwise known as “Bill Clinton”) Hillary shouting at a Secret Service officer. From the book “The Truth about Hillary” by Edward Klein, p. 5

(6) “You fucking idiot” Hillary to a State Trooper who was driving her to an event. From the book “Crossfire” ~pg. 84

(7) “Put this on the ground! I left my sunglasses in the limo. I need those fucking sunglasses! We need to go back!” Hillary to Marine One helicopter pilot to turn back while in route to Air Force One. From the book ” Dereliction of Duty” p. 71-72

(8) “Come on Bill, put your dick up! You can’t fuck her here!!” Hillary to Gov. Bill Clinton when she spots him talking with an attractive female. From the book “Inside the White House” by Ronald Kessler, p. 243

(9) I’m not voting for Clinton,” Air Force Staff Sergeant Eric Bonner posted on Facebook in July. “It’s because she actually talked to me once. Almost a sentence,” wrote the Air Force K-9 handler. “One of my last details was for Hillary when she was Secretary of State,” Bonner continued. “I helped with sweeps of her DV quarters and staff vehicles. Her words to me?” According to Bonner, Clinton told him, “Get that fucking dog away from me.” Then she turns to her Security Detail and berates them up and down about why that animal was in her quarters.

Additionally, when she walked around the White House, NO ONE was permitted to look her in the eye, they all had to lower their heads with their eyes towards the ground whenever she walked by. She once demanded that the US Marines who stand guard in the White House not wear their uniforms.


Remember her most vile comment about Benghazi: “What difference at this point does it make?” Now it will be clear why the crew of “Marine One” helicopter nick-named the craft, “Broomstick ONE”. 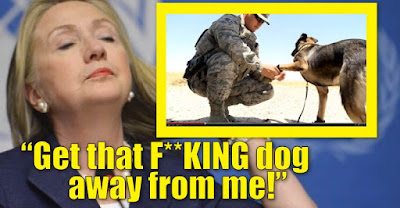