(Charis Chang’s article direct from The NEWS.COM.AU on 30 September 2016.)

SOUTH Australia has the most expensive electricity in Australia and has been prone to blackouts, what exactly is going on there? Premier Jay Weatherill was quick to point out that the latest blackout, which saw the entire state plunged into darkness, was a “weather event”, not a “renewable energy event” but it has drawn attention to issues with the state’s electricity network.

The state gets 40 per cent of its electricity from renewable energy but there are now concerns wind and solar will not be enough to provide reliable electricity. Today, Prime Minister Malcolm Turnbull said several state Labor governments — not just in SA — had set “extremely aggressive, extremely unrealistic” targets for renewable energy use.

“If you are stuck in an elevator, if the lights won’t go on, if your fridge is thawing out, everything in the kitchen is thawing out because the power is gone, you are not going to be concerned about the particular source of that power,” he told reporters in Launceston. “You want to know that the energy is secure.”


While Federal Energy Minister Josh Frydenberg has acknowledged SA’s blackout was caused by a once-in-a-50-year weather event, he said it still raised broader questions about the future of energy security in Australia.

He said he would will bring the state and territory energy ministers together within weeks to discuss ways of avoiding the cascading effect of power blackouts and how to better manage the shift to renewable energy.

So does South Australia have a problem?

WHAT HAPPENED ON WEDNESDAY?

Mr Weatherill says the precise sequence of events was still being worked through but the blackout appears to be related to severe “almost cyclonic force winds” and 80,000 lightning strikes that battered the state about 3.48pm.

The strong winds and lightning strikes look to have damaged power transmission towers, mainly in the mid-north of the state including near Port Augusta and Port Pirie. This seems to be backed up by photos of a toppled electricity tower near Melrose, north of Adelaide, which have lit up social media.

ElectraNet, which owns the transmission towers, said 23 towers appeared to have been damaged, including three out of the four transmission lines moving power between Adelaide and the north of South Australia.

“We haven’t done a complete assessment yet but there’s a strong suspicions that (the damage) is from wind, some might have been from lightning as well,” a spokeswoman told news.com.au. In addition to this, the distribution network (which are the electricity poles and wires that deliver lower voltage power to people’s homes and businesses) were also damaged.

The damage triggered an automatic cut at the interconnector, which as the name suggests, links South Australia and Victoria. It allows the states to share electricity, and acts like a large surge protector, which automatically cuts off supply if there is a fault in the system to protect the entire system from being damaged. 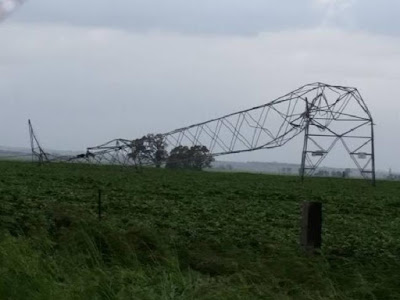 South Australia gets its electricity from wind, solar and gas but no longer has coal power after Alinta’s Northern Power Station and Playford A station at Port Augusta closed in May. It followed the closure of the Playford B in 2012.

At the time, Australian Energy Council chief executive Matthew Warren said the closure would leave the state with less back-up energy on days of high demand. The state would need to rely on renewable energy and the interconnector which provides electricity from Victoria for base-load power.

“The reality for South Australians is that we’re in uncharted waters,” Mr Warren said in May. “There’s an increased level of risk that we really haven’t seen before anywhere in the world, so it doesn’t mean we’ll have more blackouts, hopefully if we’re smart we can sort out solutions so power supply can be the same as usual, but it’s an increased risk.”

This week’s blackout was not the first time South Australia has felt the impact of losing its supply from Victoria. It also experienced a blackout in some parts of Adelaide, Barossa Valley, Port Pirie and west coast region late last year. That was blamed on the failure of the interconnector.

Electricity supplier ElectraNet said the disruption was caused by an incident at a substation in Mingboll, in the state’s southeast that blocked supply from Victoria. It took about three hours to restore power to about 110,000 customers.

ElectraNet acknowledged South Australia had relied on Victorian power for a long time. “We always rely to some extent on the Victorian interconnector, it’s been there for some 25-30 years, it is part of our supply mix,” an ElectraNet spokesman Paul Roberts told ABC at the time.

“Many times other supply will kick in and there’s always stuff on standby, but in this case it may well have been the size of the load.” The South Australian government has already flagged its intention to seek more power from other states, including NSW.

Mr Weatherill announced a $500,000 feasibility study this year into building a new interconnector to link it with other eastern states. Mr Weatherill said he hoped this would bring down electricity prices in South Australia, which are often the highest in Australia, and would also open up the possibilities for the state’s renewable energy to be shipped to other states.

Electricity prices spiked in South Australia in July costing one cement maker $3 million, according to The Advertiser. Prices reportedly surged to $14,000 a megawatt hour (they are normally below $100) after gas prices jumped while the interconnector in Heywood was undergoing an upgrade.

SA Treasurer Tom Koutsantonis was forced to plead with the Pelican Point gas-fired power station to produce more energy to supply businesses on the verge of shutting down.

TOO MUCH RELIANCE ON RENEWABLES?

The closures of the Port Augusta power stations was partly blamed on the rise of renewable energy sources and an oversupply of power in the National Electricity Market. At the time, SA Manufacturing Minister Kyam Maher described the market as holding more capacity than was needed to meet demand.

In 2014, South Australia managed for the first time to get more than 100 per cent of its electricity needs for a working day between 9.30am to 6pm, from a combination of wind and solar energy. Overall it gets more than 40 per cent of its power from renewables, and has a target of 50 per cent to be achieved within 10 years. 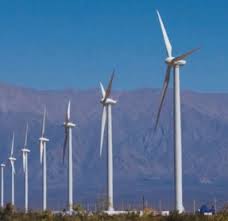 Deputy Prime Minister Barnaby Joyce has said he thinks SA is too reliant on renewables and independent SA Senator Nick Xenophon has called for an inquiry into what happened. Mr Xenophon said South Australia had become the “laughing stock of the nation” because it didn’t have power on Wednesday. He wants to know whether the blackout could have been avoided.

But Mr Weatherill has blamed people’s “political agendas” for the “ignorant remarks”, noting that Mr Joyce hated wind farms. When asked whether SA could still have had power if it still had its own coal-fired baseload power, Mr Weatherill said no.

“It’s a misunderstanding that there’s no baseload power,” Mr Weatherill said. “The baseload power was operating in SA at the time this event occurred. If this had happened 20 years ago when there was no renewable energy, the same thing would have happened, that’s the advice we’ve received from the Australian Energy Market Operator. I mean this is a weather event, not a renewable energy event, and the truth is this, when there’s a crisis people pull out their agendas.”

While Mr Xenophon wants the Australian Energy Market Commission to carry out an independent analysis, Mr Weatherill said the government would already look into the circumstances of the blackout and how it responded. He said the Australian Energy Market Operator would also analyse the technical issues and it’s likely the Energy Council of energy ministers would have an inquiry in due course.

Energy expert Andrew Stock, a member of the Climate Council, dismissed attempts to blame renewables for the blackout as opportunistic and irresponsible. “Storms can knock out electricity networks no matter where the power supply is coming from,” he said.

At the time of the blackout, 1000MW of wind power was being fed into the South Australian system. The council also warned the SA storm event is a sign of weather to come. “The atmosphere is packing much more energy than 70 years ago, which contributes to the increasing intensity of such storms,” council member Professor Will Steffen said.


Intense rainfall was projected to increase in Australia and had already increased at a global level. “This is a prelude to a disturbing future, and it’s only going to get worse if we don’t address climate change.”