Myanmar President Htin Kyaw's statement blaming a little-known Rohingya militant group “Aqa Mul Mujahideen” for the recent attacks on Myanmar border outposts and its Pakistan links has not surprised Indian and Bangladesh intelligence. They say the Myanmar president - and the country's intelligence - has got it right.

Senior officials in Indian intelligence, who have closely followed the Rohingya armed militancy for decades, told Mizzima that the Aqa Mul Mujahideen (AMM) leaders were indeed trained in Pakistan.

"Later they recruited Rohingya youths in Rakhine and trained them in jungle bases on the Bangladesh-Myanmar border," said one official of India's Military Intelligence, who preferred not to be named. He said that AMM is a new armed group that originated from the Harkat-ul-Jihad Islami-Arakan (HUJI-A) which enjoys close relations with the Pakistan Taliban.


The HUJI-A chief is Abdus Qadoos Burmi, a Pakistani national of Rohingya origin, who it is claimed recruited Hafiz Tohar, 45, from Kyauk Pyin Seik village in Maungdaw in Myanmar and arranged for his training in Pakistan. Tohar is said to be heading the AMM now and Qadoos Burmi is reported to be close to the Lashkar-e-Tayyaba/ Jamaatud Dawa (LeT/JuD), headed by Hafiz Sayeed.

Mizzima had earlier reported the LeT-JuDpresence especially that of its humanitarian front Fala- I - Insaniyat in Rohingya relief camps in Rakhine State after the 2012 riots. Qadoos Burmi developed the HUJI-A network in Bangladesh, using the remote hills on its border with Myanmar, where coverage by Bangladesh security forces was at best limited.

After training a few promising recruits in Pakistan, they were sent to set up bases on the Bangladesh-Myanmar border, where the new Rohingya recruits were trained in combat techniques and use of explosives.

That was during the 2013-14 phase when Bangladesh police and security forces were busy tackling violent political unrest unleashed in their country by Islamist opposition parties against the ruling Awami League. Bangladesh intelligence zeroed in on a few such bases but security forces raiding them found they had just been abandoned by inmates days, sometimes hours, before the raids.

Indian intelligence officials say that Pakistan-linked Rohingya terror groups have also been noticed in Mae Sot area on the Thai side of the Thai-Myanmar border. Frequent movement of Maulana Ustad Wazeer @ Noor Kabir and Fareed Faizullah, both Pakistani nationals of Rohingya origin, have been noticed in Thailand border areas, they said.

Wazeer and Fareed have been recruiting Rohingya “illegal migrants” who fled from Bangladesh to Thailand or Malaysia but could not get necessary documentation in those countries. "These migrants were on the edge and recruiting them was not so difficult," said one Indian intelligence official.

He said that Indian security forces found Rohingya jihadis fighting alongside Pakistani fighters in Indian Kashmir. One of their top leaders, Chotta Burmi, was killed in Indian Kashmir alongwith JeM commander Adil Pathan in October 2015. Chotta Burmi was found to be sharing the dias with LeT supremo Hafiz Sayeed in the following picture used in a previous Mizzima report. 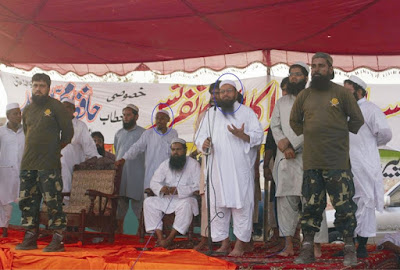 Earlier, the Bangladesh authorities arrested Maulana Shabeer Ahmed, a Pakistan-based Rohingya operative in 2012 who revealed that he was coordinating with Rohingya militants in Bangladesh on behalf of Jaish e Mohammed (JeM). Shabeer Ahmed was involved in carrying out illegal financial transactions from Pakistan to Bangladesh, said a Bangladesh intelligence official.

He said that besides Qadoos Burmi, another Rohingya militant network said to be operating out of Pakistan is headed by Maulana Abdul Hamid, a Pakistan national of Rohingya origin, who is reported to be active along the Bangladesh-Myanmar border. Abdul Hamid maintains close links with LeT, according to Indian intelligence.

It says that Pakistan's ISI's special operations cell coordinates the activity of the different Rohingya groups, whose leadership is based in the country. Rohingya community sources say that Nur Hussain Arakani, head of the Pakistan chapter of Rohingya Solidarity Organisation (RSO), has been collecting funds and relief material from Hafiz Mohammed Sayeed of JuD/ LeT and Maulana Abdu Rauf of JuD-linked Falah-e-Insaaniyat foundation (FIF) in 2015.

The RSO is the mother group, from which a number of more militant offshoots have now emerged. Both India and Bangladesh are said to be very worried over the new spurt in Rohingya militancy. Bangladesh's secular Awami League government, fighting a rising curve of Islamist militancy at home, has come forward to extend all cooperation to Myanmar in its efforts to curb Rohingya militancy.

"We cannot rule out that these Rohingya armed groups may have close links with Bangladesh's homegrown jihadis and could share hideouts, finances and sources of weapons supply," said a senior official of Bangladesh's Counter-Terrorism Centre. He said Bangladesh and Myanmar needed to cooperate in handling a problem that both shared.

India also suspects Rohingya militants could use Indian territory to attack Myanmar tourists and pilgrims and may be used by Pakistan to hit at Indian targets as well. "They persuade the young people using religious extremism, and they have financial support from outside," said a Burmese language statement from the President's office."They are broadcasting their videos on the Internet like ISIS, Taliban and al Qaeda. They now have 400 insurgents fighting in Maungdaw region."


Several videos showing armed men speaking the language of the mostly stateless Rohingya have circulated online this week. According to a Reuters report, the agency has not been able to verify the authenticity of the videos, but government officials say they believe they show the perpetrators of the attacks that began on October 9.