Syrian Refugees in Germany Holidaying Back In Syria

(Staff article direct from The NEW OBSERVER EUROPE on 11 September 2016.)

“Refugee” Hoaxers Holiday in Homelands. The utterly bogus nature of the refugee invasion of Europe has been exposed with the news that Syrians, Afghans, and Lebanese invaders already granted “asylum” in Germany are taking holidays back in their homelands from which they supposedly “fled in fear of their lives.”

The astonishing swindle has been exposed in an article in the Welt am Sonntag newspaper, which also revealed that the holidays are being paid for out of welfare payments from the German taxpayers.

The article, titled “Flüchtlinge machen Urlaub, wo sie angeblich verfolgt warden” (“Refugees vacation where they were allegedly persecuted), also quoted government officials from the Federal Employment Agency confirming that the “refugee holidays” back in their home countries are indeed taking place.


The newspaper said that the unemployed and “recognized asylum seekers” have been taking holidays in countries such as Syria, Afghanistan, and Lebanon. The “refugees” take flights home, holiday, and then come back to Germany to continue living off the German taxpayers as if nothing had happened.

Die Welt am Sonntag said that it had confirmed cases in Berlin, and that “people who are familiar with the process” say that it is happening in other regions in Germany as well. A spokesman for the Federal Employment Agency (Bundesagentur für Arbeit, BfA) confirmed to the newspaper that there “are such cases,” but that they “have no analysis or statistics on this subject,” and therefore could not supply any further information to the paper.

The Muslim invaders are on what is known as “Hartz IV” welfare, which entitles them to 21 days per year “local absence”—which means that they get the full welfare payments for that time without having to be present.

A recipient must “notify the local authority of any period of absence, its expected duration, but not to where the recipient is going,” the BfA said, adding that there is “no legal basis upon which to demand this information.”

Furthermore, should an official at the welfare office become aware that a claimant is going to take a trip back to the country from where they claim to have fled, the data protection laws prohibit that official from passing that information to the immigration authorities, the BfA spokesman also confirmed to the newspaper.

The Welt am Sonntag pointed out that the German government had been aware of the problem for quite a while, but had kept it quiet. In June this year, the Federal Office for Migration and Refugees (“Bundesamt für Migration und Flüchtlinge,” BAMF) sent a written request to employment agencies in Berlin asking them to report travel arrangements made by persons “entitled to asylum” to their countries of origin.

Although the Welt am Sonntag did not say why the problem had been hushed up by the German government, the answer is obvious: they knew that exposure would reveal the lies behind the “asylum” invasion of Germany and Europe.

A German Interior Ministry spokesman told the Welt am Sonntag that that “asylum seekers” who travel back to the countries of their “persecution” could lead to individual examination of their cases and ultimately the withdrawal of their protected status. “In the case of travel for leisure purposes, this may be an indication that in the refugee no fear of persecution exists,” the spokesman said in understatement.


The chairman of Angela Merkel’s ruling CDU faction, serving on the Committee on Internal Affairs of the Bundestag, Armin Schuster, told Die Welt am Sonntag that it was “inconceivable that these people would qualify for asylum. If this is true, it leaves one almost speechless,” he said. 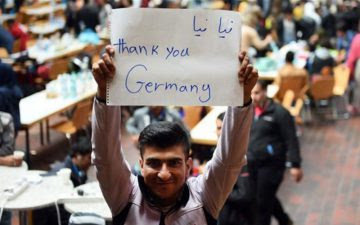