Anti-Quintana Protests In Sittwe The Capital Of Arakan

(News article and photos direct from The Narinjara Agency on February 14, 2014.) 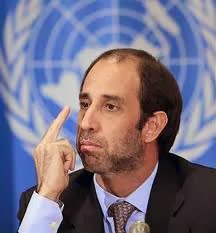 In early afternoon same day he visited the Offices of Myanmar Human Rights Commission at No-27 Prome Road and met the Commission Chairman Win Myaing and other members of the Commission.

Later in the afternoon Quintana visited the Thingangyun offices of George Soros-sponsored Myanmar Open Society run by so-called 88-Generation Students and had a cordial discussion with former student leaders and their boss Min Ko Naing there.


Next day very early on February-14 Quintana left Rangoon and arrived at Sittwe Airport unannounced. He then immediately proceeded to Sittwe Prison and inspected the Prison at about 9 in the morning.


His earlier-than-scheduled arrival has out-smarted the Yakhine Buddhists planning to demonstrate massively at the airport on his arrival. But they still managed to get him at the Prison gate and staged their noisy protest there as he came out of the Prison.


The small protest at Sittwe Prison was participated by only about 200 Yakhine-Buddhist activists. It appears that Quintana with the help of Burmese authorities is not exactly following UNHCR’s announced schedule to avoid the repeats of ugly protests in Meikhtilar by Burmese-Buddhists on August-14 during his last visit to Burma last year.