(My thoughts on how badly someone would feel if he or she is on Socialists’ Target-List.)

New York the Big Apple has a new mayor this year and his name is Bill De Blasio and he is an openly Socialist. And he has a list many New Yorkers are now calling it “De Blasio’s List” not unlike “Shindler’s List” as almost all people on that list could exclusively be rich Jewish New Yorkers.

Unlike Schindler's List the people on De Blassio's List will not be saved from Nazis but they'll be slugged out of their existence with a heavy tax by the New York Socialists led by new mayor Bill De Blassio who in 1983 deliberately changed his German name "Wilhelm" to Italian name "De Blassio" for political purposes.

To be eligible for that list one must be a New Yorker earning a yearly income of US$ 500,000 or more. No one except the federal, State, and City income-tax authorities knows who are on that list. Of course the ones on the list themselves know they are on the dreaded list.


But the Socialists who have just taken over New York City with the overwhelming support of poor blacks and latinos (the new majority-minority) know them a very long time as they had already worked out how much dole they could squeeze out of the rich white people on that list by taxing them extra 2% on top of their current 13% New York State-and-City personal income taxes the highest in any city of this world.


And to whom that newly collected money would go? According to De Blasio’s Tax-the-Wealthy plan that new tax money collected would cover so-called free Universal Pre-Kindergarten Classes (UPKs) for New York children.

In other words most of that money robbed from the rich New Yorkers will definitely go into the pockets of unionized teachers and staffers (the notorious United Federation of Teachers – UFT) running that program which will indoctrinate the pre-schoolers to become future Socialist youths. Worsening downward spiral for the United States of America which once was the beacon of freedom and epicenter of Democrative Capitalism.

In Newly-Socialist-America the Hard-Working Rich Are now Loathed

Bloomberg News reports that the city's corporate leaders and super-wealthy are offended by mayoral candidate Bill de Blasio's plan to raise taxes on those earning over $500,000 a year to fund universal pre-K and after school programs for middle school kids.

The head of the business leaders' group was astonished by de Blasio's indifference to the needs of corporate executives. "It shows lack of sensitivity to the city's biggest revenue providers and job creators," said Kathryn Wylde, president of the Partnership for New York City, a network of 200 chief executive officers, including co-Chairman Laurence Fink of BlackRock Inc. (BLK), the world's biggest money manager." 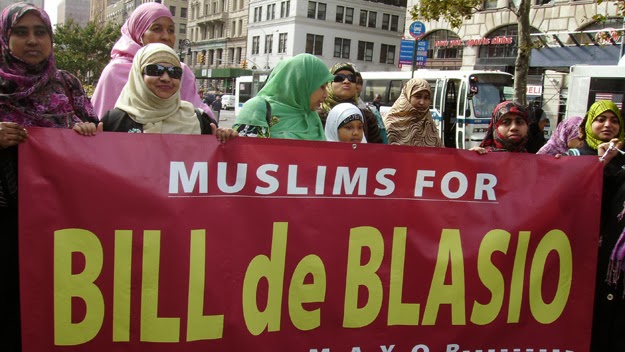 Some predicted an exodus of rich whites from the city.

These are the same people who raise $80 million in a single night at a benefit for the Robin Hood Foundation dinner to support charter schools in New York City. Of course, those gifts are tax-deductible, not taxes.

What has de Blasio proposed?


Here is the reaction of one hedge fund manager: "E.E. "Buzzy" Geduld, who runs the hedge fund Cougar Capital LLC in the city and is a trustee of Manhattan's Dalton School, where annual tuition tops $40,000, said de Blasio's plan "is the most absurd thing I've ever heard" and "not a smart thing to do."