(News article and photos direct from The 7NewsYahoo on February 19, 2014.)

Man jailed for indecent assault on train. A Bangladeshi asylum seeker has been sentenced to at least 15 months in jail for stalking and indecently assaulting a blind woman on a Sydney train.

Rubel Sheikh, 26, followed the 23-year-old woman to Ashfield station in July last year before boarding a train with her. There he touched her breast twice, told her she was "sexy" and repeatedly asked for a "goodbye kiss", the woman said.

At the Sydney Central Local Court on Wednesday, Sheikh was sentenced to 20 months' jail, with a minimum term of 15 months, for aggravated indecent assault and stalking. In sentencing, Magistrate John Andrews said Sheikh had preyed on the vulnerable woman and exploited her disability.


But his barrister Jonathan Cohen argued the victim had proved to be "no shrinking violet" by telling Sheikh to leave her alone and wasn't violently threatened. "The stalking was for ... the purpose of legitimately making a pass at her," he said. "The fact that it went horribly amiss is another issue."

He said Sheikh had come to Australia by boat in April last year after his life was threatened in his homeland. He'd become isolated, lonely and depressed after making the journey, and had been "overwhelmed" when he assaulted the young woman.

But Crown Prosecutor Vanessa Rochibaux rejected the suggestion the assault was minor. "It was an extremely vulnerable situation that the victim was in - on a moving train with this disability and not being able to retreat," she argued.

Sheikh listened to the sentence with the aid of an interpreter, but showed no emotion throughout. Given time already spent in custody, he will be eligible for parole on October 30 this year, when he'll likely be deported.
(Blogger's note: Groping of the blind Aussie woman on a Sydney train and the following police manhunt was widely reported in Sydney newspapers in July last year. Following report was from the Sydney Morning Herald on July 31, 2013.)

A visually impaired woman was allegedly indecently assaulted by a man who is believed to have followed her from a railway station, onto two trains and throughout her hour-long journey across the city.

The man is accused of repeatedly touching the 23-year-old woman, who walked with the assistance of a cane, on the breast during her trip on public transport from Ashfield to Gymea this month.

While the woman's visual impairment meant she could not provide a description of her attacker to police, officers were able to examine CCTV footage from railway stations and have released footage of a man they would like to speak to over the attack on July 17.

The woman told police that she was in an elevator at Ashfield railway station between 11am and midday when someone touched her on the breast.

Footage from the station shows a man holding open the elevator doors and apparently assisting the woman to get into the elevator. He can be seen speaking to the woman, and appears to be looking at her chest.

The woman continued her journey, catching a train from Ashfield to Central, where she caught another train bound for Gymea. The woman claims she was first assaulted in an elevator. The woman told police that when the train was between Jannali and Sutherland railway stations, she felt a hand on her breast and heard a male voice speaking to her. The 23-year-old moved to another seat, but was followed by the man who continued speaking to her. 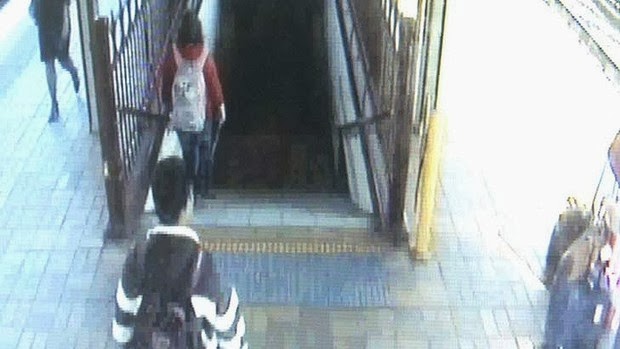 After a brief discussion, the man got up and walked away. The woman got off the train at Gymea and later reported the incident to Ashfield police. The man police would like to speak to is described as being of Indian appearance, about 170 centimetres tall with a thin build.


He was carrying a backpack and wearing a distinctive brown and white striped jacket. Anyone with information about the man's identity or location has been asked to contact Ashfield Police or Crime Stoppers on 1800 333 000.