Notorious pro-Bengali-Muslim AZG or informally known as MSF-Holland is on the brink of being summarily kicked out of Burma. A reliable governmental-source told the Coral Arakan News Agency today that the announcement from either the President’s Office or Burma’s Ministry of Health is expected to be coming out soon.

The official also informed the Coral Arakan News that MSF-Holland the supposedly medical INGO has been operating in Burma with more than 30 foreigners but only 3 are medical doctors while the rest is pro-Muslim political agitators hell bent on promoting the rights of illegal Bengali-Muslims (so-called Rohingyas). 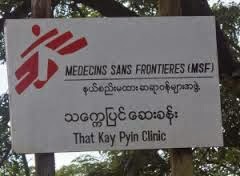 Since mid 1993 the so-called Doctors-Without-Borders MSF has been operating in Burma with a sole purpose of promoting Bengali-Muslim affairs. They have successfully cloaked their pro-Muslim political advocacy with so-called humanitarian programmes especially in the Muslim-infested Yakhine State.

The so-called “Doctors Without Borders” has been operating in Burma as a “MSF without Doctors” since their more than 30 staff has only three medical doctors.

They even provided following disturbing and demeaning anti-Burma weapon into the ignorant hands of Chriytopher Smith the US Congressman who initiated a draft law calling to let all the illegal Bengali-Muslims on Burma-Bangladeshi border become Burma’s citizens.

“Whereas Medecins sans Frontieres has described the Rohingya as one of the ten people groups in the world most at risk of extinction.”

They also lie through their teeth to the world that their so-called doctors had treated 24 Bengali-Muslims seriously wounded after the so-called Du-chi-yar-dan massacre last month. But when Official Investigating Commission asked them for evidence they couldn’t produce a single shred of proof supporting their absurd claims. 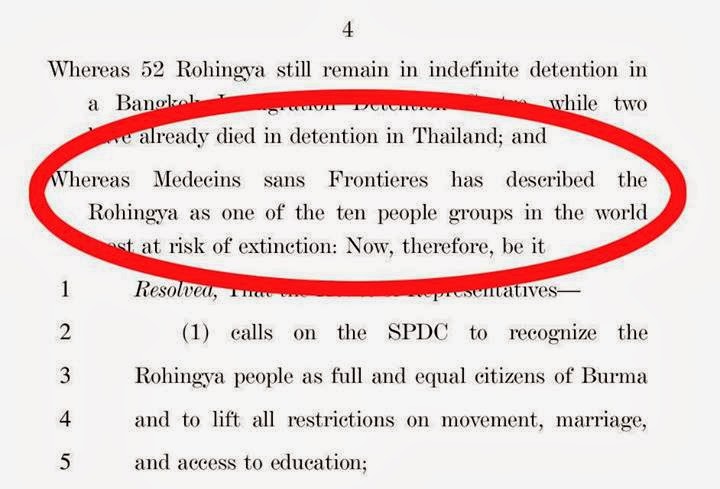 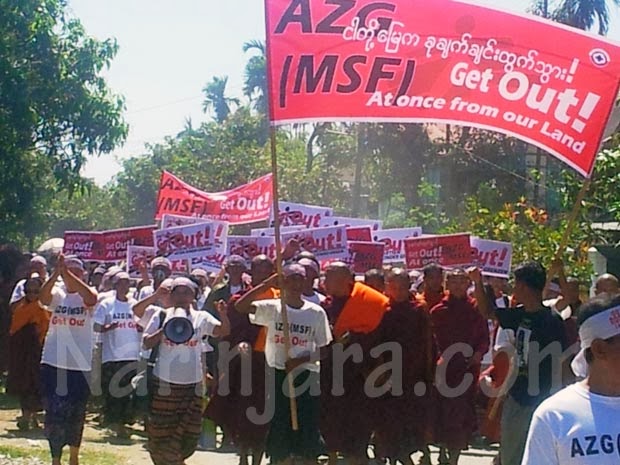 Since the beginning of last year 2013, when MSF-Holland opened a new clinic-cum-political-office in Sittwe the capital city of Yakhine State, there have been at least six massive protests by enraged Yakhine-Buddhists against pro-Muslim MSF operating willy-nilly on their ancestral lands.

Present massive protest in Sittwe has started on February 22 and today is its fifth day of massive protest participated by thousands and thousands of marching Yakhine-Buddhists including 500 sit-down protesters right in front of MSF offices in Sittwe.

Following was what Ma Nyo Aye a woman-leader of Yakhine Social Network said of the reasons behind their prolonged public protests against AZG (aka) MSF-Holland.

“Yes, we know there is a long-term MOU between AZG and Union Government’s Health Ministry to provide health services to both Buddhist and Muslims here in our Yakhine State. But we’ve been seeing their pro-Muslim stance here for too long time now.

They are notoriously biased. First we Yakhine-Buddhist had tolerated them for a while. But now their actions are so much over the top against us Buddhists and we can no longer accept that bad behaviour on our soil here.”

When asked what are the examples of MSF’s over the top pro-Bengali-Muslim activities here in Yakhine State this was Ma Nyo Aye’s frank reply.

“Yes I can tell you exactly as we see it. Number-1 is encouraging and openly-supporting Bengali-Muslims to become citizens as so-called Rohingyas.

Number-2 is their propagandas and lies about so-called violations of Bengali-Muslims’ human rights through international media.

Number-3 is teaching and instructing the Bengali-Muslims how to lie and cry to the international organization visiting their camps and wards.

Number-4 is spying and reporting the movements and detail positions of security forces and Security-Police here in Arakan.

And number-5 the latest is their false and damaging report to the UN and international media that our security forces had killed 40 Bengali-Muslims at Du-chi-yar-dan and also falsely-reporting that their doctors (which was almost non-existence here) themselves had to treat 24 seriously-wounded Bengali-Muslims at one of their so-called clinics.

Those are the exact reasons we are here protesting so that MSF-Holland (aka) AZG will be kicked out of here not to incite and inflame racio-religious conflicts here in our Arakan no more.”

When asked why are they protesting direct to MSF to leave Arakan instead of  protesting to the Union Government as Thein Sein’s Government is the one agreeing with the MSF by a MOU allowing then freely into Yakhine State, this was Ma Nyo Aye’s answer.

“We have our own reason for that. We know they have had a MOU with Union Government to operate freely in our Arakan. But when MSF-AZG came in here and do whatever they want to do they do not even let our State Government know what exactly they are doing here.

So we sent an open letter on February-16 to President Thei Sein and gave copies to MSF-AZG, Union Health Ministry, and relevant Yakhine Sate Ministries. We also send the copies to all MSF-AZG offices here and their landlords. We are doing what we have to do before MSF doing irreversible damage to us Yakhine-Buddhist people.”

When asked what she will do if MSF refuses to leave Arakan this was Ma Nyo Aye’s answer.

“We already have a committee to tackle that problem. The Committee has nine 9-6-9 monks and nine civilian activists and been leading the ongoing protests. If MSF-AZG doesn’t respond to our protests we are going to intensify the protests at the same time a media offensive exposing MSF’s illegal activities here.”

When asked what is her options if MSF-AZG wants to negotiate for a compromise this was Ma Nyo Aye’s hardline answer.


“We have had enough of what they have been doing to us here last 20 years. They definitely are pro-Bengali and pro-Muslim organization and they are no bloody doctors and we Buddhist have no good reason to accept their presence here. Only option is they have to leave our Arakan, period. That is not-negotiable and we refuse to meet them for a compromise.” 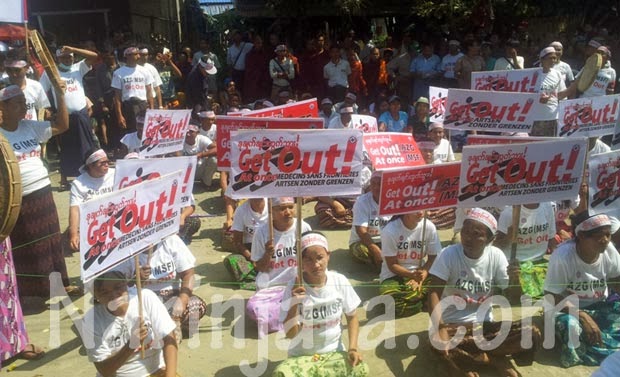 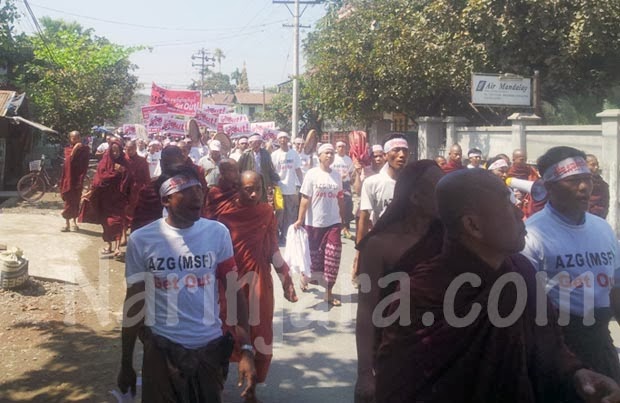 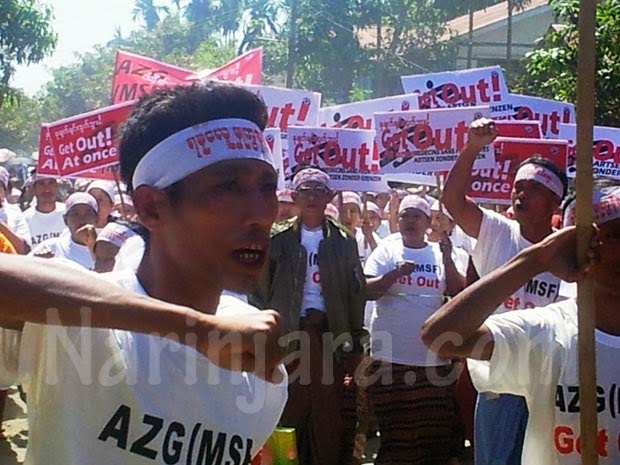 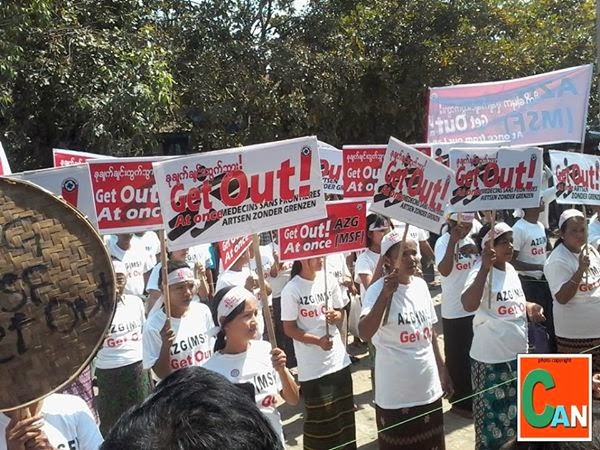