(News articles and photos direct from The MEG & Narinjara on February 13, 2014.)

A literary talk on the celebrated Union Day on February-12 in a Rangoon’s Township was forced to cancel after local Buddhist monks rejected the planned participation of two prominent Muslim leaders as primary speakers.

The literary talk held by Aung San Suu Kyi’s NLD (National League for Democracy) party in North Oakkalapa Township was cancelled by the organizers just few hours before the talk.

Shin Thu-seit-tah a monk official from the Patriotic Myanmar Buddhist Monks Association sent a protesting letter on February-10 to the Township Administrator and another protest letter to NLD organizers on February-11.

In the letters the nationalist monks protested to the fact that two Muslim leaders were invited to talk about politics on a sacred Union-Day ceremony deceitfully cloaked as just a literary talk.

“This talk is not a genuine literary talk. It’s a political talk masqueraded as a literary talk. It will definitely include Muslims’ attacks on our Nationalist Movement. They are just taking advantage of the Union Day ceremony for their benefits. We have to protest,”  explained Shin Thu-seit-tah.

One leading political analyst who preferred to be anonymous commented that nowadays so many political talks are cloaked and held as literary talks and it is a dangerous trend for real writers and NLD should stop promoting its dirty politics in NLD-sponsored so-called literary talks all over Burma.


“Both NLD and 88ers should think seriously of these literary-politico talks. Obviously we’re now going through the clashes between the social-democratic politicians and nationalists. This talk has been arranged by NLD and the speakers are NLD’s Ko Ni and his ally 88ers Mya Aye and both will be talking about their side of politics obviously. Last minute cancellation of this talk is a bad omen for NLD, I believe.”

Last Minute Cancellation of the So-called Literary Talks by NLD

According to Htun Myat the NLD’s Rangoon Division Secretary the talks were to be cancelled as they could not accept the condition that two Muslim leaders were not to speak at the talks.

“We tried to negotiate with the monks. But they kept insisting on removing U Ko Ni and Ko Mya Aye. When we asked other two writer-speakers they said they would not participate if two Muslims were not permitted. So we had no other choice but to surrender the permit and cancel the Union-Day literary talks,” said bitterly NLD’s Htun Myat.

Following was what Shi Thu-seit-tah victoriously said of the eventual cancellation of the literary talks by NLD’s Rangoon Division executive.

“Today is the day celebrating all the ethnic nationalities of our Union of Burma. So it was totally inappropriate for NLD to allow only Muslims to speak but not any other ethnic leaders. NLD has so many educated ethnics and they should be chosen to speak at the Union Day ceremony. No, NLD wouldn’t do it and pick only the political Muslims.”


NLD’s Rangoon Division Secretary Htun Myat announced at 6:30 pm on February-12 just before the NLD literary talks that because of Buddhist Monks Association’s strong objection two Muslim leaders had withdrawn and they had to cancel the Union-Day Literary Talks at the very last minutes. 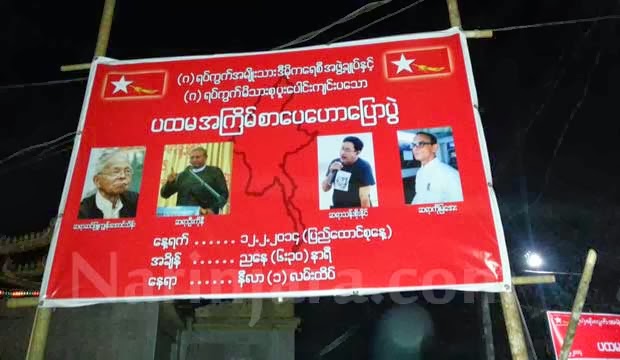