Ronald Reagan’s “We Must Fight The Evil” Speech

(From Ronald Reagan’s Speech “A Time for Choosing” delivered on 27 October 1964.)

Let’s set the record straight. There is no argument over the choice between peace and war, but there is only one guaranteed way you can have peace and you can have it in the next second, “surrender.”

Admittedly there is a risk in any course we follow other than this, but every lesson in history tells us that the greater risk lies in appeasement, and this is the specter our well-meaning liberal friends refuse to face that their policy of accommodation is appeasement, and it gives no choice between peace and war, only between fight or surrender.

If we continue to accommodate, continue to back and retreat, then eventually we have to face the final demand “the ultimatum.” And what then?


When Nikita Khrushchev has told his people he knows what our answer will be? He has told them that we are retreating under the pressure of the Cold War, and someday when the time comes to deliver the final ultimatum, our surrender will be voluntary because by that time we will have weakened from within spiritually, morally, and economically.

He believes this because from our side he has heard voices pleading for peace at any price or better Red than dead, or as one commentator put it, he would rather live on his knees than die on his feet.

And therein lies the road to war, because those voices don’t speak for the rest of us. You and I know and do not believe that life is so dear and peace so sweet as to be purchased at the price of chains and slavery. If nothing in life is worth dying for, when did this begin just in the face of this enemy? 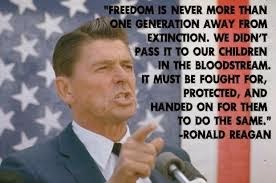 Or should Moses have told the children of Israel to live in slavery under the pharaohs? Should Christ have refused the cross? Should the patriots at Concord Bridge have thrown down their guns and refused to fire the shot heard round the world?

The martyrs of history were not fools, and our honored dead who gave their lives to stop the advance of the Nazis didn’t die in vain. Where, then, is the road to peace? Well, it’s a simple answer after all.

You and I have the courage to say to our enemies. There is a price we will not pay. There is a point beyond which they must not advance.

Winston Churchill said that the destiny of man is not measured by material computation. When great forces are on the move in the world, we learn we are spirits not animals. And he said, “There is something going on in time and space, and beyond time and space, which, whether we like it or not, spells duty.”

You and I have a rendezvous with destiny. We will preserve for our children this, the last best hope of man on Earth, or we will sentence them to take the last step into a thousand years of darkness.


(Blogger’s Notes: My hero Ronald Reagan defeated the evil of last twentieth century “Soviets-led Communism and Socialism” by fighting back, not by appeasing. The evil of this twenty-first century is “Islam” and we must not appease them evil Muslims like bloody Socialists and so-called Progressives are doing nowadays. We must fight back for our individual freedom and our children’s.

Islam is not a religion, period. It is a totalitarian political system controlled by the stone-aged Sharia Law prescribed strictly by warlord-cum-false-prophet Mohammad in his own Koran. Islam must be treated like the Communism was treated by Reagan. The argument for appeasers like Obama and the lefties in US is that there are more than 1.5 billion Muslims and so we must accommodate them to achieve peace.

Please tell it to Reagan in 1980 when more than 2 billions, nearly half of the global population back then, were Communists but he steadfastly refused to accommodate them. For Reagan appeasing is the surrender and evil is evil as it doesn't matter how many people are believing in that evil ideology like Communism back then and Islamism now. We must fight back the evil ideology Islam.)