(Wendy Rockett’s article from the NYC-based ASIA FOUNDATION on 4 September 2013.)

As we contemplate the triumphs and remaining challenges in improving literacy this International Literacy Day, consider the fascinating case of Myanmar.

The country is one of the poorest in Southeast Asia, with decaying infrastructure and an economy that is just now starting to pick up after decades of stagnation. Yet, it boasts one of the highest literacy rates in the region: 92.7 percent, according to government figures.

The reverence for reading is evident when you visit Myanmar. In Yangon, bookstores or book- lending shops are prominent on seemingly every street. Street vendors bide their time between customers reading news magazines. Book clubs are popular.

Libraries such as the American Center and British Council Library have robust book club programs; a young professional and former medical student I spoke with during my last trip there said he and his friends have been involved in book clubs since their university days.


A common explanation for this phenomenon is that Myanmar had one of the best education systems in Asia until the 1950s, and the attitudes and habits around learning stem from those days. But, many fear this story will change as decades of underinvestment and deteriorating standards take their toll. Schools are currently poorly equipped, and educational materials are often of low quality and outdated.

Although primary school enrolment is compulsory, enrolment drops to 52 percent for girls and 49 percent for boys by the time they reach secondary school, according to UNICEF.

Recent steps taken by the government point to its recognition that, in order for Myanmar to move forward, larger investments need to be made in education. The education allocation in the 2012-2013 government budget, was doubled to 1.7 percent of GDP. However, access to books and information remains a challenge in the country, and Myanmar’s immediate neighbors, Thailand and Bangladesh, spend 20.9 percent and 11.2 percent, respectively, of their budgets on education.

Censorship was abolished in 2012, leading to an explosion in the news magazine industry, but the book publishing industry has lagged far behind. Tha Tun Oo, president of the Myanmar Printers and Publishers Association, estimates that there are about 2,000 book and news publishers and printers, in the country.

Many book publishers are small operations that would consider a printing of 3,000 books a large print run. Furthermore, they are financially hampered by a reading public that needs to spend an average of 68 percent of the household budget on food alone. Justifying books for leisure reading in this environment is far from simple.

Tha Tun Oo and Myo Myint Maung, managing director of Sarpay Beikman, the government publishing house and largest publisher in the country, both cite training and help with obtaining translation rights as the biggest areas in which publishers need assistance.

As the country opens and opportunities expand, publishers aspire to learn from their peers around the world. They also know that after decades of isolation, the Myanmar people hunger for information from the outside but have little to no experience with best practices for acquiring the rights to translate and publish content from foreign publishers.

“Myanmar is now engaging with the international community and we need to learn all about other countries around the world,” Dr. Thant Thaw Kaung, executive director of the book publisher and distributor, Myanmar Book Center, recently told me. “The role of translation of English-language materials into Myanmar is crucial in the process.”

Furthermore, the Myanmar government, too, needs access to international sources of information as they institute reforms and catch up with their neighbors and the world after so many decades of isolation. 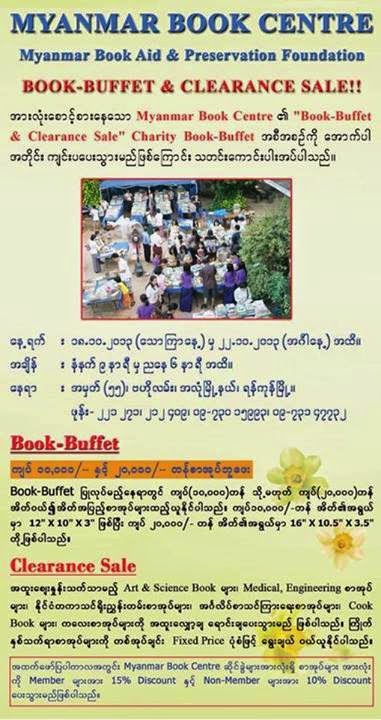 Given how pervasive reading is in the Myanmar way of life, and the strong desire to continue the tradition for today’s children, the lack of compelling children’s reading material in the libraries I visited was painfully evident. I came across very few storybooks; the ones that were available were donated English-language publications.

Most of the books in the children’s sections were local black-and-white productions that were heavy on text and had few simple illustrations. A 2011 OECD study found a strong relationship between enjoyment in reading with higher reading test scores. Engaging, attractive children’s books are essential for an educated society, but few are available in Myanmar.


In order to help cultivate a market for high-quality early reading material and build local capacity for translated works, The Asia Foundation’s Books for Asia program has partnered with the Myanmar Book Center on a pilot project to translate, print, and distribute storybooks from top American publishers into Myanmar language.

We are in discussions with children’s book publisher Barefoot Books on the translation of four of their basic reading titles for our inaugural Books for Myanmar collection. In the future, we hope to expand this project to include Myanmar’s minority languages and support workshops for local authors, illustrators, and publishers in creating their own content.

A dedicated Books for Myanmar fund to support these activities has been kick-started by the generous donations of individuals. Since 2007, Books for Asia donates books to approximately 200 Myanmar institutions each year. To meet the information needs of the government, we have contributed special collections to the Parliament, Ministry of Foreign Affairs, and the President’s Office.

Almost every village and town in Burma used to have Buddhist-Monks-run primary schools. My father was educated in his village school ran by the village monks and I also did go to our town's National School ran by local Buddhist monks together with State Basic Education Department from pre-K to Year-4.

One huge difference between Burmese Buddhist Schools and Saudi-funded Islamist Madrassas now popping up all over Burma like mushrooms is that our Buddhist Schools do not teach Buddhism at all, at least in my father and my times but I don't know about now, while those fucking Madrassas drive that stone-aged Koran hard into young Bengali-Muslim heads, nothing else. Our Buddhist schools taught us literacy and arithmetic and basic General Science.

Burmese Buddhist monks have been both the spiritual teachers of the people and responsible for the basic literacy of laypersons – although they are not technically supposed to take on this second role.

Following Myanmar’s annexing by the British in 1885, missionary schools overtook monasteries as the leading educational institutions in the major cities. In small towns and villages, however, monasteries often remained the only centre of learning.

Despite their low profile under the British rule, monastic schools paved the way for the emergence of the national schools – established by the patriots who boycotted the University Act that was passed by the British in 1920.

In 1962, however, monastic education was abolished by Myanmar’s socialist government as the whole education system was reformed into modern universal State School System. But monastic education returned in 1993 when the government began recognising monastic schools that followed the guidelines of the Ministry of Education.

But modern monastic schools have some differences from those in the past. They use the same system of grades, curricula and examinations as state schools. Teachers, who are young volunteers or retired civil servants from the education sector, are appointed on a salary basis.


Monastic schools today especially target orphans or children from destitute families, who can ill-afford to pursue formal education. Some well-funded monastic schools also provide students with free food and accommodation while many others are just normal day schools.