SHARIA-ISM: Battle To Control Women & Everyone Else

(The BLURB direct from the website of Joy Brighton’s book "Sharia-Ism Is Here".)

In April 2014, the Universities of Michigan, Chicago, Illinois and Brandeis refused to screen or acknowledge nine Muslim, Sikh & Christian women rights leaders, who expose the brutal abuse of women and girls justified in the name of religion, culture or Shariah, on screen in the Honor Diaries documentary, released March 8.

Yes you read this correctly. Women students and faculty at American colleges are silencing the heart-breaking abuse of women and actively shutting down Free Speech. Does Freedom of Religion over-rule the abuse of women in its name?

How has violence against women become political? Where does religion end and politics begin? How are European Leaders drawing this line? This colorful, pocket sized, easy to read, Show N Tell Book explains what is going on in America.


Each page is description of one of 60+ American or European news stories from 2008 – 2014, with a quote, photo, and context provided by over 75 experts. Women’s rights activist and author, Joy Brighton, provides bullet point chapter summaries and green “insight boxes” to help readers connect the dots.

This book is written for busy Americans who are concerned that political correctness is backfiring in America. But, they only have 10 minutes while drinking coffee or in the “loo”, to flip through a book, before their day starts. This is your FLIP book.

In fact, Sharia-ists are determined to control anyone who refuses to follow their rules. Only a small piece of Sharia-ism involves terrorism. Because if you want to control something, why blow it up?

(Blogger's Notes: Nope, I disagree. Sharia is like Italian Mafia thriving on humans' absolute fear for their lives. To control 100% of the human society and everyone to tow their line they need to blow up at least some part of that society to incite mortal fear in the rest. And that's what both Islam and Mafia does.)

To the contrary, U.S. elite are enabling the growth of Sharia-ism out of ignorance, intimidation or self-interest. Fortunately, a growing number of Congress and State Governors, educated by the grass roots and freelance journalists are taking action against Sharia-ism.

So what can you do to get involved? Start with 10 minutes of “flipping” through this book.

Sharia-Ism Is Here: The Battle to Control Women and Everyone Else

You are holding in your hands a chronicle of the surprising inroads that Shariah, the guiding principles of Radical Islam, has made in America during the critical years of 2008-2013.

Radical Islam, also known as Political or Shariah Islam, has expanded onto every continent, and with it Sharia-ism, the political movement of Radical Islam, whose goal of totalitarian control of every nation and people is incompatible with Western values of individual liberties and inalienable rights. Sharia-ism is about politics, not religion. 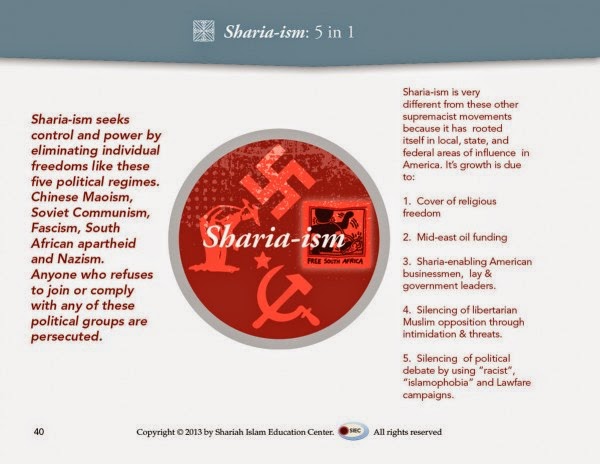 Sharia-ism is about total control, not simply destruction or terrorism. Sharia-ism, like Communism, Nazism, and Fascism before it, is propelled by leaders who govern absolutely by shutting down freedom of speech, religion, and equal justice before the law.

Why has Sharia-ism successfully rooted itself in America, while other totalitarian movements failed to become a serious threat in the United States?

A deadly super-fuel of political correctness, financial promise, partisan self-interest, and refusal to separate religion from politics, is driving Sharia-ism. It is no secret that Middle East petro-dollars are controlled by “bad actors” such as Saudi and Iranian governments and radical groups.

Yet, these oil dollars are buying influence, quiet accommodation and goodwill from American Elites despite the known misalignment of these Mid-East players with America’s strategic interests.

In this resource book, you will learn how uninformed United States leaders in our justice, prison and intelligence departments, politicians, corporate executives and college presidents, are enabling Sharia-ism in America.

You will also read that European and Canadian governments are doing a quick reversal of their earlier Shariah tolerance. For the past two years, debate about Sharia-ism in these regions has been fierce, and in its wake, laws are rapidly being passed to curb Shariah advances. For example:

To pre-empt legal action against Sharia-ism in America, Shariah leaders have launched an attack on free political speech in America. The ability to shut down free speech and debate is necessary for the success of any totalitarian movement.

In this book you will learn of the intimidation and silencing of Americans who criticize or merely question the legitimacy of the Shariah platform.  This means that Americans are already living under controlled by the most powerful Shariah law: the Shariah Blasphemy Law. 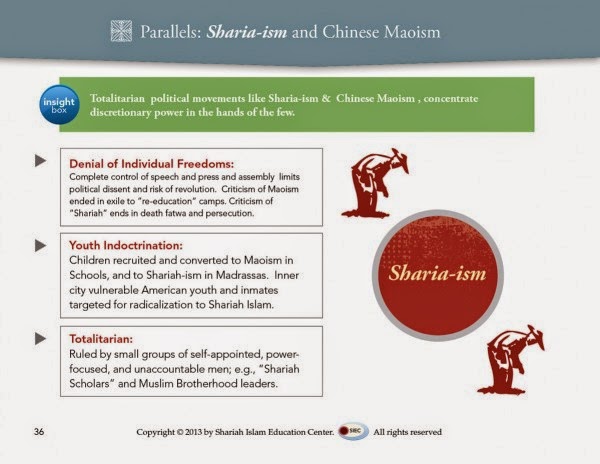 Think about this: Today, Americans passionately and loudly debate issues of importance, such as the U.S. Debt ceiling, Gay Marriage, and Universal Health Care. But not so for the issue of Shariah.

For example, in 2012, the House Intelligence Committee denied an investigation into the possible infiltration of the Muslim Brotherhood (MB) into our U.S. Government, and scolded the five Congressmen who did not “exercise caution” in making these requests.

The White House was silent. What is the fear of having “too much information” on a matter of national security?

Rep. Langevin, (D-RI), member of the Permanent Homeland Security Committee since 2005, called for the “withdrawal” or dismissal of these requests, stating: “Given our access to sensitive information, I also believe members of the Intelligence Committee have a special responsibility to exercise caution in making statements about national security concerns. The only reasonable action would be for the authors of these letters to take would be to withdraw their requests”.  Aug. 2012.

As we “exercise caution,” the White House backed the Muslim Brotherhood party in Egypt, which was overthrown by civil revolution ten months later and legally banned from Egypt in Sept 2013. What do the Egyptian people know that we don’t?

As we “exercise caution,” three (3) of the Jihadists involved in the September 2013 Kenya Mall massacre were young men recruited right out of their Arizona, Illinois, Maine, Minnesota and Missouri hometowns. There is reason for alarm is in America. And voices must be raised.

As we “exercise caution,” Muslim girls and women in America are suffering under Shariah Practices: 30 – 40% experience abuse, thousands forced into marriage, and a growing percentage wear the full face veil or burqa.

The Imam of Drancy, France, calls the niqab “a prison for women, a tool of sexist domination, incompatible with life in society”.

That’s why I’ve compiled these crucially important news stories from 2008-2013 into a single, easy-to-read “Show N’ Tell” book with publicly sourced research or quotes by 75 experts, insiders, authors, elected politicians, journalists, professionals, and world leaders to provide facts, context & credibility. The significance of each news story looked at individually may be of little concern. When examined as a collective whole, disturbing patterns are hard to deny.


(Blogger's Notes: One thing really puzzling me by this excellent book is author Joy Brighton's deliberate attempt to separate the universally-hated Sharia Law from the Islam. As far as I know Islam and Sharia are two sides of same coin as if one is a Muslim the follower of Islam one has to obey blindly the Sharia Law. So instead of saying Islam is bad bad shit she is trying to say Islam is okay but Sharia is bad bad shit, but it does not make sense to me at all.)
Posted by Hla Oo at 10:36 AM