Church Of England Against Halal-Islamization Of UK

Last week the media finally cottoned-on to the fact that much of the meat we eat is halal – that is, meat from animals slaughtered in such a way that their blood drains before consumption.

Halal meat is mandatory for the followers of Islam. The animals’ throats are cut while the Muslim slaughterer proclaims in Arabic ‘In the name of Allah, Allah is great.’ And Muslim slaughterhouses do not stun the animal first, as they believe that only if it is conscious will the blood drain completely.

I wrote about the invasion of halal meat in this column back in February 2013, and my views have not changed. In fact the problem is worse than I thought. For example, I knew that most New Zealand lamb is halal-slaughtered. I had not realised that roughly a quarter of British slaughterhouses are now halal.

So although I would defend to the hilt the right of any community to follow their own rules relating to food and other products, I do not believe that the rest of us should have halal meat foisted on us by stealth.


For this is what is happening. All the main supermarkets admit to selling halal meat. Only Morrison’s, as far as I am aware, has its own slaughterhouses and can guarantee that its British meat products are not halal. Many restaurant chains are serving halal meat: all chicken served by Pizza Express, for example, is slaughtered that way.

The scandal is that none of the supermarkets or restaurant chains are prepared to label their products as either halal or non-halal. The reason is pretty obvious: they know that observant Muslims will seek out the information and give them their custom, while the rest of us are none the wiser.

Tesco’s has made the utterly fatuous statement that it would be misleading to label halal meat as halal, because they didn’t ask for the animals to have their throats cut whilst still conscious.

For some people this is a religious issue. Sikhs, for example, are strictly forbidden to eat meat that has been ‘ritually slaughtered’. Many Christians do not wish to subscribe to the creeping Islamisation of our country.

For others it is a matter of animal welfare. The in-coming president of the British Veterinary Association has called for a total ban on this method of slaughter as inhumane. The RSPCA agrees.

Meanwhile a bill requiring all halal and kosher meat to be labelled at the point of sale was defeated in the House of Commons because it would ‘discriminate’ against Muslims and Jews. How? And why don’t our PC politicians listen to the leaders of those faith communities, who are also calling for labelling?


Without labelling, none of us has any choice. But we have the right to know what we are eating. Now the media has woken up to the fact, perhaps something will happen. I’m not holding my breath. 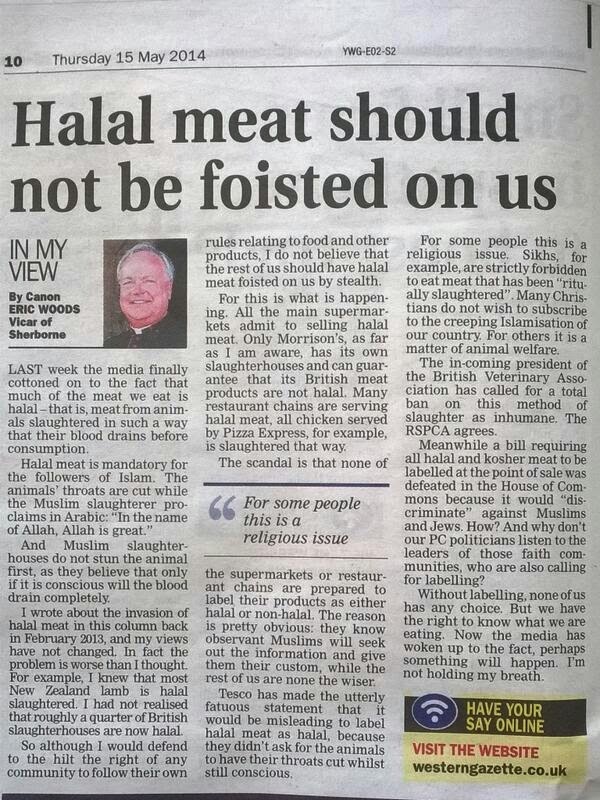 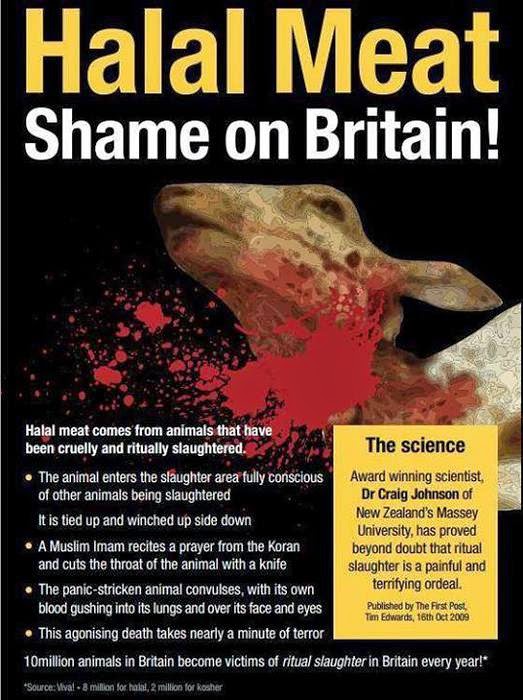