(News article direct from the ECONOMIST MAGAZINE BLOG on 26 Apr 2014.)

“DO YOU have rebels in your country?” It is the first question the weary tea farmer fires at us. The people in his village, high in the hills in Shan state in northern Myanmar, are from the Palaung ethnic minority.

They know all about rebels and quite a bit about government soldiers too. Both sides have come to the village for decades, to tax the tea, demand food, and to recruit, often by force, young men, women and children to add to their ranks.

Our young interpreter looks twitchy. He has witnessed fighting before between the local rebels—mostly from an armed insurgency known as the Shan State Army North (SSA-N)—and Myanmar’s army. He fears kidnapping. His physique, he explains, makes him vulnerable. He is tall and looks strong.

The farmer tries to reassure him. The last big confrontation was ten days ago. He points to the north where the last rays of the sun cast a blue veil over hills of desiccated bamboo, shabby tea bushes and denuded, smouldering forests.

From the window of his large teak farmhouse he saw big columns of smoke and heard mortar-fire. He did not know what started the fighting; but he knew it was bad news. The tea harvest was under way and it would be hard to find casual labourers when soldiers were on the move.

The conflict has even engulfed the village’s spirit house, just behind the village school. It houses two small beds, neatly made up with pillows and blankets, for the spirits to rest in after defending the village. Outside hang the spirits’ defences: Kalashnikovs and rocket-propelled grenades, carved out of wood and freshly painted in bright green and orange (see below).
Like many of Mynamar’s ethnic militias, the SSA-N signed a ceasefire with the government. But it claims that since it did so in 2012 it has engaged in over 100 clashes with the army, and lost five camps.


The tea-growing hills around Kyaukme are peaceful compared with areas further north, where heavy fighting broke out in early April. Parts of northern Shan state and neighbouring Kachin state, both of which border China, are controlled by, among others, the Kachin Independence Army (KIA) and the ethnic-Palaung Ta’ang National Liberation Army (TNLA)—the two big insurgencies who do not currently have ceasefires in place.

In 2011, a 17-year ceasefire between the KIA and the government broke down. In August last year the government acknowledged that it had lost 1,000 soldiers in clashes with the KIA in late 2012. Some reports suggest the true figure was far higher.

The latest clashes are linked to a controversial census carried out by the government and financed by the United Nations and foreign governments in early April, but extended until June in Shan and Kachin (and Rakhine) States.

To help the census-takers get to remote villages in rebel-held areas, troops were trucked in large numbers. The Kachins, worried that the census would be used as an excuse to chip away at their shrinking territory, objected and offered to do the counting themselves.

Tensions mounted in early April when a jeep carrying a senior army officer didn’t stop at a KIA checkpoint. A KIA soldier opened fire, killing a major. The army retaliated, overran a strategic Kachin camp and gained control over an important road link. In the battle, 22 fighters died, mainly from the army.

In two separate incidents the TNLA claimed to have killed at least ten more government soldiers in ambushes near the Chinese border on April 23rd.

Picking the harvest, during a lull

The recent fighting has driven at least 3,000 villagers from their homes, many for the second or third time, trapping them between the army and the closed Chinese border without enough drinking water, food or medical care. They join about 100,000 displaced since the ceasefire broke down in 2011.

The increase in fighting came on the heels of a high-level visit to Lashio in northern Shan State by Myanmar’s army chief, Min Aung Hlaing. He implicitly threatened the armed groups, including the SSA and a powerful army of the Wa ethnic group, known as the UWSA, demanding they “lay down their guns”.

The meeting in Lashio coincided with the latest round of peace talks in Yangon between the government, the army and 16 rebel groups, including the KIA and the TNLA. The protracted peace process has not attained its holy grail: a nationwide cease fire and the end of 66 years of fractured civil war. But the government still hopes its new deadline, August 1st, will be met.

Its actions in the Shall hills however might push this goal further out of reach. This week, the United Nations joined international rights groups in calling on the Myanmar government to investigate war crimes and sexual violence by its army.

On April 25th Ban Ki-moon, the UN Secretary-General warned that the fighting in Kachin state has "ominous implications" and could “jeopardise progress towards a ceasefire and political dialogue”.

The farmer in the Palaung village pours another cup of green tea. He does not like any of the armed groups and just wants to be left in peace. But on his wall hang calendars with pictures of the SSA-N. It is a kind of insurance. In his area the rebels still call the shots.


But above all he dislikes Myanmar’s majority ethnic group, the Burmans. Like most members of the country’s ethnic minorities, he does not trust them. And the latest bout of fighting in the Shan hills has only deepened his distrust. 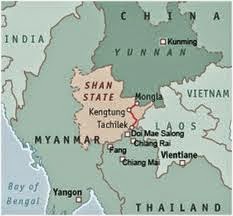