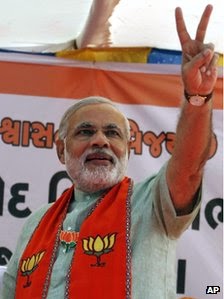 (Reuters) - Narendra Modi thundered to victory on Friday in India's election, trouncing the ruling Nehru-Gandhi dynasty in a seismic political shift that gives the Hindu nationalist and his party a mandate for sweeping economic reform.

Modi's landslide, the most resounding election victory India has seen in 30 years, was welcomed with a blistering rally on India's stock markets and raucous celebrations at offices across the country of his Bharatiya Janata Party (BJP), where supporters danced, let off fireworks and handed out sweets.

The BJP looked certain of a parliamentary majority, giving the 63-year-old former tea-seller ample room to advance reforms started 23 years ago by current Prime Minister Manmohan Singh but which stalled in recent years.

Speaking to a sea of people dressed in the party's official orange colors and chanting his name in his home state of Gujarat, Modi thanked the nation, and immediately addressed concerns his pro-Hindu leanings would sideline minorities.


"The age of divisive politics has ended, from today onwards the politics of uniting people will begin,"  Modi said. "We want more strength for the wellbeing of the country ... I see a glorious and prosperous India."

Singh's Congress party suffered its worst wipeout, a big boost to Modi's goal of ending the dominance of the Nehru-Gandhi family that has governed for most of the 67 years of independent India. 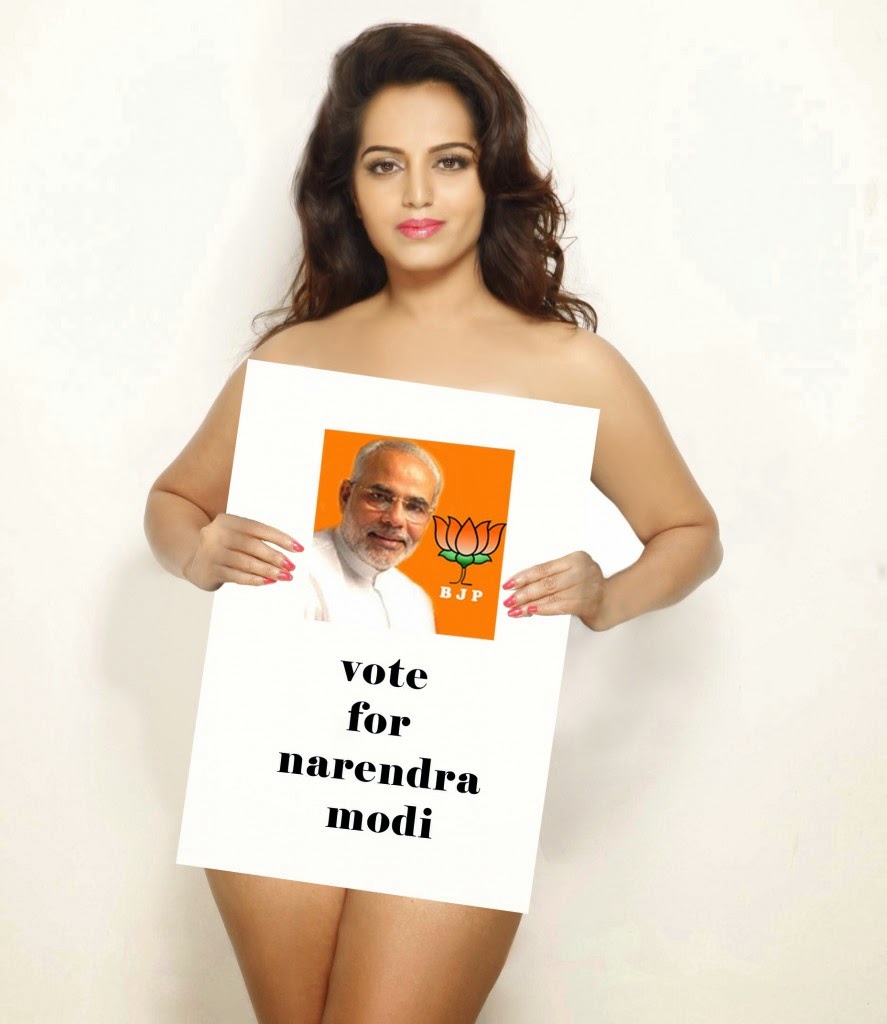 Singh, whose party looked set to win less than 50 of the 543 parliamentary seats at stake, congratulated Modi with a telephone call. Party president Sonia Gandhi and her son Rahul quickly conceded defeat.

The desire for change has been so strong that voters put aside concerns about Modi's Hindu-centric politics.

"India's economy was in the doldrums. We have hope that he'll lift up the economy, that he'll create jobs,"  said Shailesh Jha, 29, embracing a jubilant group of friends at the BJP's Delhi headquarters.

Jha echoed the sentiment of those who believed Modi's promises of economic growth to meet the demands of millions of youngsters who reach working age each year and could boost India's productivity if given jobs.

With more than six times the seats of its closest rival, Modi's is the most decisive mandate for a leader since the 1984 assassination of prime minister Indira Gandhi propelled her son to office. Since 1989, India has been governed by coalitions.

By 10 p.m. (1230 EST), the BJP had won or was winning in 282 seats in parliament, counting trends showed, comfortably across the halfway mark of 272 required to rule. An alliance led by the party was ahead in 340 seats, TV channel NDTV said.

In Washington, the Obama administration congratulated Modi and the BJP and said he would be granted a visa for U.S. travel. Washington denied Modi a visa in 2005 over sectarian riots in Gujarat three years earlier, when he had just become chief minister of the state. More than 1,000 people, most of them Muslims, were killed.

Responding to the news, Indian markets got off to a roaring start, with the rupee breaking below 59 to the U.S. dollar, an 11-month high, and the benchmark stock index jumping 6 percent to a record high before paring its gains.

Betting on a Modi win, foreign investors have poured more than $16 billion into Indian stocks and bonds in the past six months and now hold over 22 percent of Mumbai-listed equities - a stake estimated by Morgan Stanley at almost $280 billion.

Unlike his predecessors, Modi will not have to deal with unruly partners as he implements reform. That could usher in profound economic changes, with some supporters imagining him as India's answer to Margaret Thatcher.

He will try to replicate his success in attracting investment and building infrastructure in Gujarat, the state he has governed for more than 12 years.

"He can afford to have a smaller but stronger cabinet, that means a far more decisive government. He has been saying less government and more governance, we are really likely to see that,"  said Navneet Munot, chief investment officer at SBI Funds Management in Mumbai.

But with India's economy suffering its worst slowdown since the 1980s and battling high inflation, it will not be an easy task to meet the hopes of millions of Indians who have bought into the idea that Modi will quickly push their country onto the top table of global economic powers.

His party also lacks strength in the upper house of parliament, where backing is needed for legislation to pass.

"It's important to be realistic about how quickly they can instigate change. It takes time to, number one, get economic reforms through the political machinery and, number two, it also takes a while before economic reforms actually have a positive impact,"  said Leif Eskesen, an economist at HSBC in Singapore. 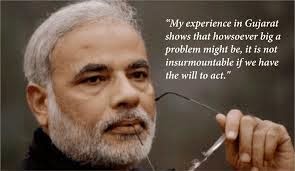 India's election was the world's largest. Staggered over five weeks, a record of more than 500 million ballots were cast from the Himalayas in the north to the tropical south, with voters braving blistering heat for a record 66 percent turnout.

Since being named as his party's candidate in September, Modi has flown 300,000 km (186,000 miles) and addressed 457 rallies in a slick, presidential-style campaign that broke the mould of Indian politics.

Modi contrasted his humble roots with the cloistered life of privilege of his dynastic rivals.

He ran circles around his slow-footed opponent Rahul Gandhi, 43, from the Congress party which his family has dominated since his great-grandfather, Jawaharlal Nehru, led India to independence from Britain in 1947. Rahul, his Italian-born mother, Sonia, beside him, shouldered blame for their party's rout.

"The Congress has done pretty badly, there is a lot for us to think about. As vice president of the party I hold myself responsible."

Both mother and son held onto their own seats, but these were the only ones their party clinched in the crucial state of Uttar Pradesh, which sends 80 lawmakers to parliament.

Prime Minister Singh launched reforms in 1991 as finance minister that opened India's socialist economy to global capital, but his spell in the top job ended marred by corruption and a floundering economy amid mounting policy paralysis. He has already bid farewell to his staff after 10 years in office.

The dark chapter of violence against Muslims that occurred on Modi's watch in Gujarat has mattered less and less to many, including a ballooning middle class alarmed by dwindling purchasing power and job opportunities as the economy slumped to sub-five percent growth in the last two years.

Modi has promised that, if elected, he would take decisive action to unblock stalled investments in power, road and rail projects to revive economic growth.

Tax and labor market reforms, backed by a gradual opening up to foreign investment, would seek to create the 10 million jobs that Asia's third-largest economy needs every year to absorb young people entering the workforce. 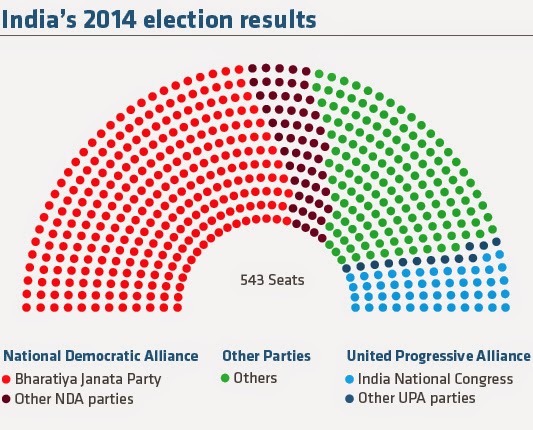 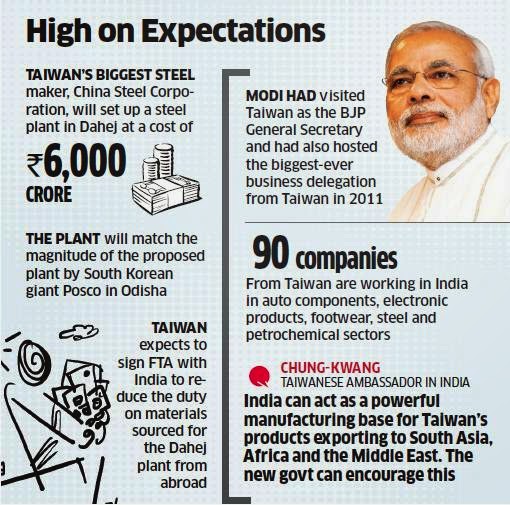