(Based on the articles from various Burmese blog posts published in May 2014.)

The violent incursion had occurred immediately after more than sixty RSO (Rohingya Solidarity Organization) terrorists -- supported by Bangladeshi Army and local Islamist authorities -- sneaked into Burma and ambushed an eight-man Burma Police patrol on the borderline on the same day.

RSO terrorists trained by Bangladeshi Army and Pakistani Taliban inside Bangladesh had been testing Burmese patience by regular incursions into Northern Arakan with the help of local Bengali-Muslim illegal settlers (so-called Rohingyas) since a few years back.

One of RSO’s successful terrorist operations was the kidnap and murder of three unarmed Burmese military engineers near the border on 6 November 2012. Both Bangladesh Government and the Rohingya lobby denied the RSO’s atrocity against unarmed Burmese soldier-engineers.

But recently this year Turkey’s INCA News Agency had come out boastfully with the RSO’s photos of those three kidnapped Burmese soldiers just before their beheading by RSO-Taliban terrorists.

After nearly six months and after constant denial of that ambush the Islamists-controlled Turkish Islamist news-agency INCA has boastfully published the photos of three Burmese engineering soldiers admittedly kidnapped and their heads brutally chopped off by the RSO terrorists. 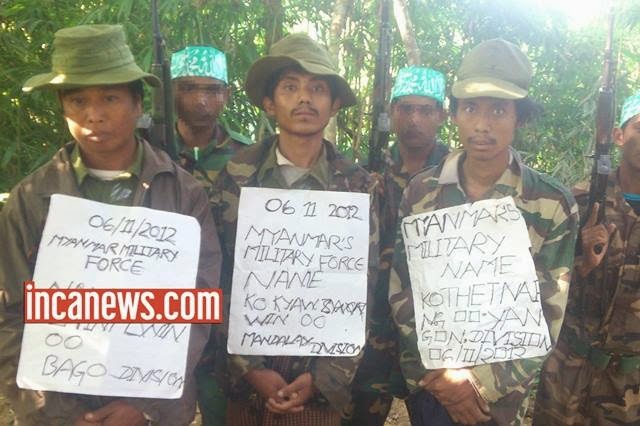 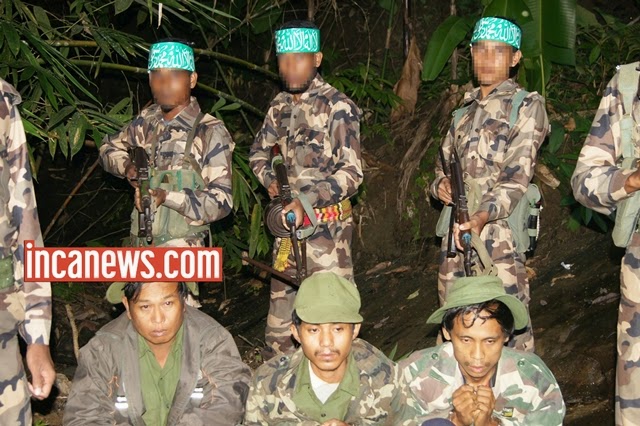 In the dark night of January-13 this year about 50 of Duuchiyardan Muslim villagers led by the core group of ten RSO-trained terrorists crossing back from Bangladesh just few days back ambushed a four-man Burma Police patrol and murdered the fleeing Burmese-Buddhist police sergeant in that Duchiyardan Bengali-Muslim village by the Bangladesh border.

While the rest of his combined police and administrators patrol were able to get away from the armed Muslim mob the Police-Sergeant at the back got separated from the patrol and lost in the winter paddy field as he rushed through the vegetable plot at the south of the Duchiyardan Village.

He was quickly caught being tangled in the old fishing nets spreading on the bamboo fencing of the vegetable plot right in the middle of the field. The Taliban Muslims then dragged him back into the village and ripped all the uniform and police equipment of his body.

They then dragged him into the village’s Ismai Mosque and cut his throat from ear to ear. Later four or five RSO terrorists took his body to the beach and dumped his body in the sea from a small row boat. Still his body has not been found yet.

The RSO-trained Bengali-Taliban terrorists were able to sneak back across the border into Bangladesh next night, according to the Bengali-Muslim villager who has been cooperating with the Burmese authorities.
Bangladeshi Army Training Bengali-Taliban Terrorists of RSO

In addition to six BGB (Border Guard Bangladesh) battalions the paramilitary forces formerly known as the Bangladesh Rifles a few heavily-armed armoured battalions of Bangladeshi Army are also stationed right along the Burma border. And they all have been constantly denying the decades-long existence of RSO terrorist camps in their territory right next to our Burma. 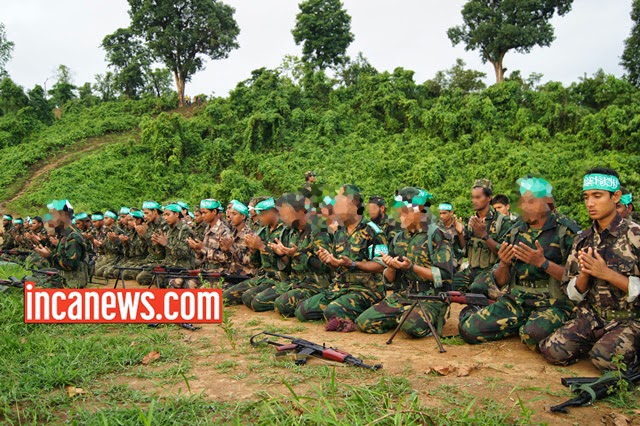 May-12 Clashes between Bengali-Taliban and Burmese Forces

At around 7 pm on May-12 a Burmese Border Police patrol ran into a group of about 10 Bengali-Talibans trying to cross the border fence at Borderpost-38 between Bangladesh’s Barlu-khali Village and Burma’s Taung-byo-let-wel Village.

The resulting fire-fight lasted only about 15 minutes as the Bengali-Taliban terrorists quickly withdrew back into the safety of Bangladesh that night. But they tried again in the next morning May-13.

The Bengali-Taliban terrorists tried to enter into Burma again at 6 am next morning near the Borderpost-37 but repelled back by Burmese police patrols that day after an hour-long fire-fight. Boderpost-37 is between Bangladesh’s Baichar-Barri Village and Burma’s Aungthabyay and Bandoola villages.

Burmese authorities did not announce the casualties from two engagements but many locals were saying that Bengali-Taliban left a couple of dead bodies hanging on the border fence. Later Muangdaw District Police Chief Shwe Than confirmed that two Bengali-Taliban terrorists -- one a major and other one a private from Bengali-Jihadi-Brigade of RSO Kalarzoe Group -- were killed in that short fire-fight.

Bangladeshi government then declared in Bangladeshi newspapers their displeasure at Burmese army’s use of heavy mortars as a few 60 mm mortar shells had landed on Bangladeshi soil. But they still refused to publicly declare the existence of RSO terrorist camps and thousands of Benglai-Taliban terrorists amassing inside Bangladesh. 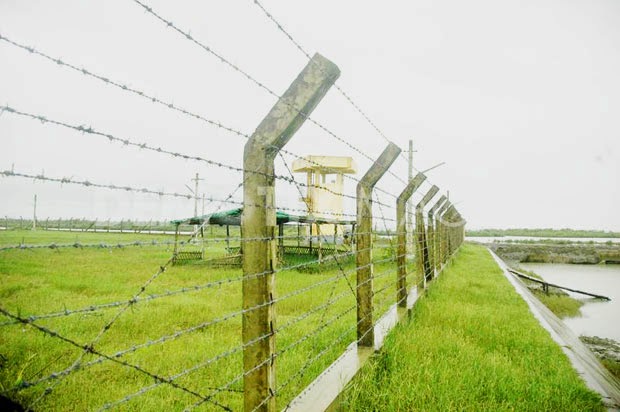 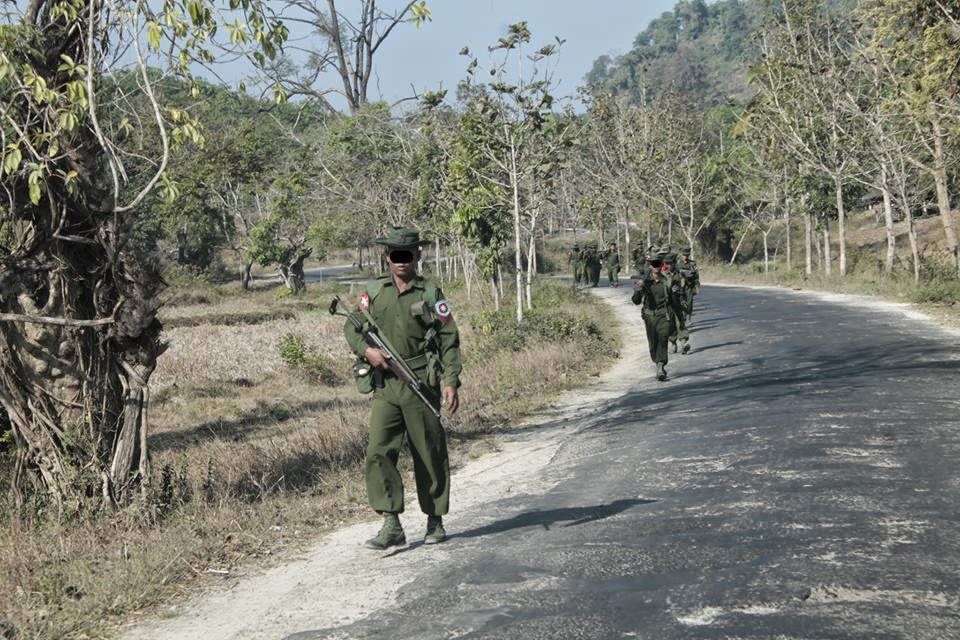 May-17 Ambush of Burma Police Patrol by Bengali-Taliban

On May-18 just last Sunday Maungdaw Central Police Station released the sad news that four men of their police patrol were killed in the ambush by RSO’s Bengali-Taliban terrorist near the Borderpost-52 in the early morning of May-17. The ambush also wounded one policeman and two policemen were reported as still missing.

The devastating ambush site was between Borderpost-52 and Burma’s Nat-yay-gan Village in seriously-troubled Maungdaw Township. That day 60-strong heavily-armed Bengali-Taliban terrorists had cross the border and benn waiting for an 8-men lightly-armed Burmese police unit on their daily routine patrol of the border fence. 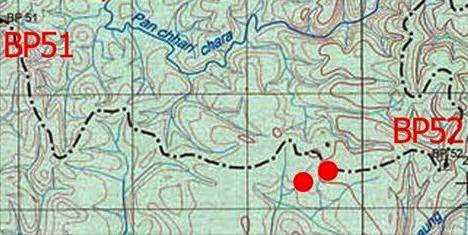 Four more policemen from the Police Outpost at Borderpost-52 then joined the patrol at about 9:20 am and the 8-men police patrol continued on towards their target Banddoola Villlage between border-posts 52 and 51.

The lightly-armed Burmese police patrol was then ambushed by at least 60-strong heavily-armed Bengali-Taliban terrorists of RSO Kalarzoe at about 9:45 am near Bandoola village.

As soon as they heard the gun shots from a distance Captain Sit Min Thu-led army platoon from LIB-352 operating nearby rushed to the ambush site and engaged the Bengali-Taliban terrorists. The firefight was over in less than half-an-hour as the Bengali-Muslim Kalarzoe fled across the border-fence back into Bangladesh their safe heaven.

At the ambush site Burmese soldiers found Police-Sub-Inspector Nway Oo Maung badly wounded in the waist and the bodies of four dead policemen. Two policemen of the ambushed-patrol were missing presumed kidnapped. 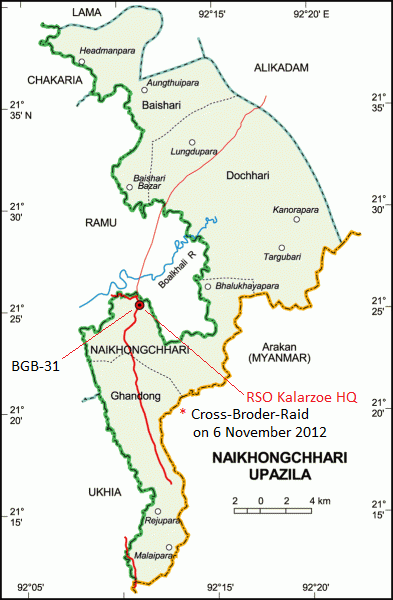 Burmese army units then attacked the Bengali-Taliban camp at between 1 pm and 3 pm and again at between 8 pm to 10 pm on the same day May-17. Scores of Benglai-Taliban terrorists were killed by devastating Burmese frontal attacks on their fortified Trakul Camp.

(Inside Bangladesh terrorist RSO’s Bengali-Muslim-Taliban have three fortified camps namely: the RSO HQ and Jihadist training camp at not-so-remote Naikhongchari town in Bengladesh’s Bandarban District right across Maungdaw Township of Burma’s north-Arakan, another base-camp nearby, and the front-line camp at Tharaku. The heavily militarised border-District has been tightly controlled by the 69th Infantry Brigade of Bangladeshi Army’s 24th Infantry Division.)

Finally a 500-strong Bengali-Talibans supported by heavily-armed Bangladeshi army’s infantry and artillery reinforced the besieged Trakul Camp and Burmese army units withdrew back into Burma side of the Border-fence.

There are already 12 Infantry Battalions (one army division) of Burma Army’s Ann-based Western Military Command (Na-Pa-Kha) now stationed inside Maungdaw Township, but only two infantry battalions namely LIB-352 and LIB-345 are in the northern-Maungdaw area where the Bengali-Taliban are infiltrating.

To ratify that serious defense deficiency two more light infantry battalions from Kyauk Phyu Twonship in the Southern-Arakan have been rapidly moved up into the area by boats.

At the same time Burmese Army is moving heavy artillery pieces like 155 mm Soltan guns and 105 mm howitzers just behind the borderline for a cross-border bombardment to take out the fortified bases of Bengali-Taliban and RSO Kalarzoes within 20 mile radius from the point of latest cross-border terrorist attack.

Various armoured units of Burma Army Armoured Corps have also been moved up to just behind the borderline to support and spearhead the cross border infantry raids if required. Burmese Army Western Command (Na-Pa-Kha) already has drawn up a detail operational plan to capture Bangladesh's Chittagong within three days of border war.


A border war between Bangladesh and Burma is inevitable as long as Bangladesh is still harboring anti-Buddhist Islamist terrorists like RSO and Bengali-Taliban, but Bangladeshi Government still hasn’t even confirmed and denounced the cross-border attack by Burmese army units so that not to admit Bangladesh’s support of their Islamist brothers Bengali-Taliban and RSO Kalarzoe groups now well-established and digging  in on Bangladeshi soil by Burma border. 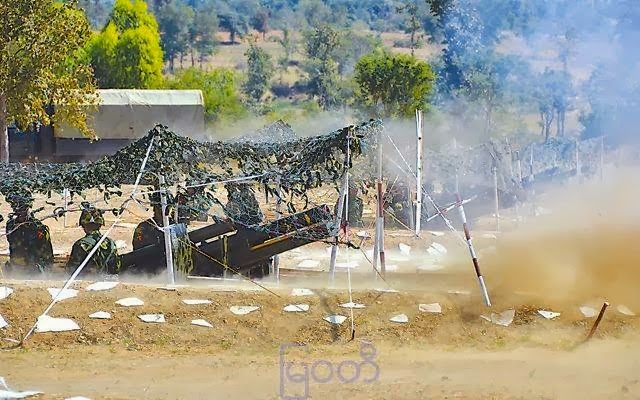 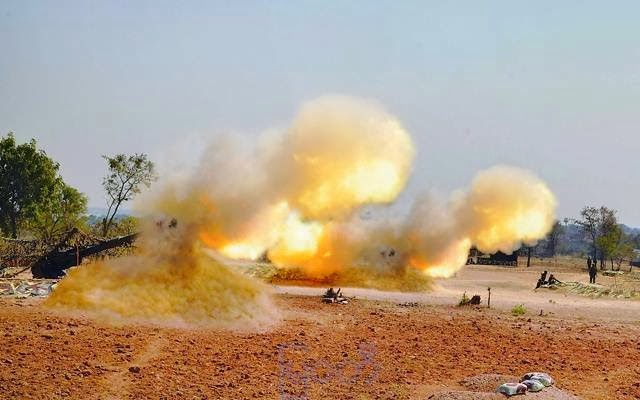 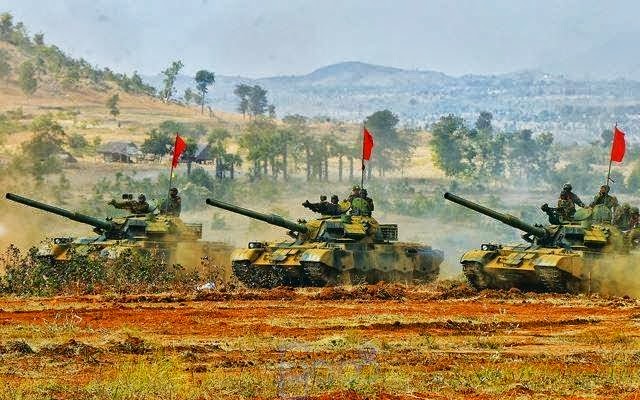 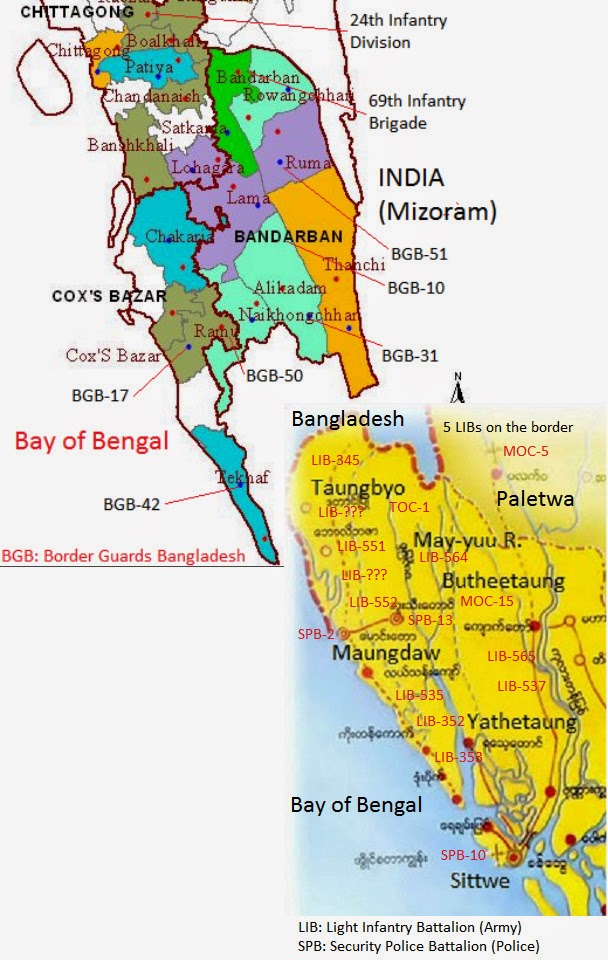