(Caroline Glick’s article direct from the JERUSALEM POST on 27 May 2014.)

The Golden Age of Catholic-Jewish relations seems to have come to an end during Francis’s visit to the Promised Land this week.

Prime Minister Binyamin Netanyahu and Foreign Minister Avigdor Liberman were right when they blamed the noxious anti-Israel incitement rampant in Europe for Saturday’s murderous shooting attack at the Jewish Museum in Brussels and the assault and battery of two Jewish brothers outside their synagogue in a Paris suburb later that day.

Anti-Israel incitement is ubiquitous in Europe and is appearing in ever-widening circles of the Western world as a whole. Until this week, the Catholic Church stayed out of the campaign to dehumanize Jews and malign the Jewish state.


Pope Benedict XVI was perceived as a friend of Israel, despite his childhood membership in the Hitler Youth. His opposition to Islam’s rejection of reason, eloquently expressed at his speech at the University of Regensburg in 2006, positioned him as a religious champion of reason, individual responsibility and law – Judaism’s primary contributions to humanity.

His predecessor Pope John Paul II was less willing to confront Islamic violence. But his opposition to Communism made him respect Israel as freedom’s outpost in the Middle East. John Paul’s visit to Israel in 2000 was in some ways an historic gesture of friendship to the Jewish people of Israel.

Both Benedict and John Paul II were outspoken champions of the Second Vatican Council and maintained doctrinal allegiance to the Church’s rejection of anti-Judaism, including the charge of deicide, and its denunciation of replacement theology.

Alas, the Golden Age of Catholic-Jewish relations seems to have come to an end during Francis’s visit to the Promised Land this week.

In one of his blander pronouncements during the papal visit, Netanyahu mentioned on Monday that Jesus spoke Hebrew. There was nothing incorrect about Netanyahu’s statement. Jesus was after all, an Israeli Jew.

But Francis couldn’t take the truth. So he indelicately interrupted his host, interjecting, “Aramaic.” Netanyahu was probably flustered. True, at the time, educated Jews spoke and wrote in Aramaic. And Jesus was educated. But the language of the people was Hebrew. And Jesus preached to the people, in Hebrew. Netanyahu responded, “He spoke Aramaic, but he knew Hebrew.”

Reuters’ write-up of the incident tried to explain away the pope’s rudeness and historical revisionism, asserting, “Modern-day discourse about Jesus is complicated and often political.” The report went on to delicately mention, “Palestinians sometimes describe Jesus as a Palestinian. Israelis object to that.” Israelis “object to that” because it is a lie.

The Palestinians – and their Islamic and Western supporters – de-Judaize Jesus and proclaim him Palestinian in order to libel the Jews and criminalize the Jewish state. It seems like it would be the job of the Bishop of Rome to set the record straight. But instead, Francis’s discourtesy indicated that at a minimum, he doesn’t think the fact of Jesus’s Judaism should be mentioned in polite company.

Francis’s behavior during his public meeting with Netanyahu could have been brushed off as much ado about nothing if it hadn’t occurred the day after his symbolic embrace of some of the worst anti-Jewish calumnies of our times, and his seeming adoption of replacement theology during his homily in Bethlehem. 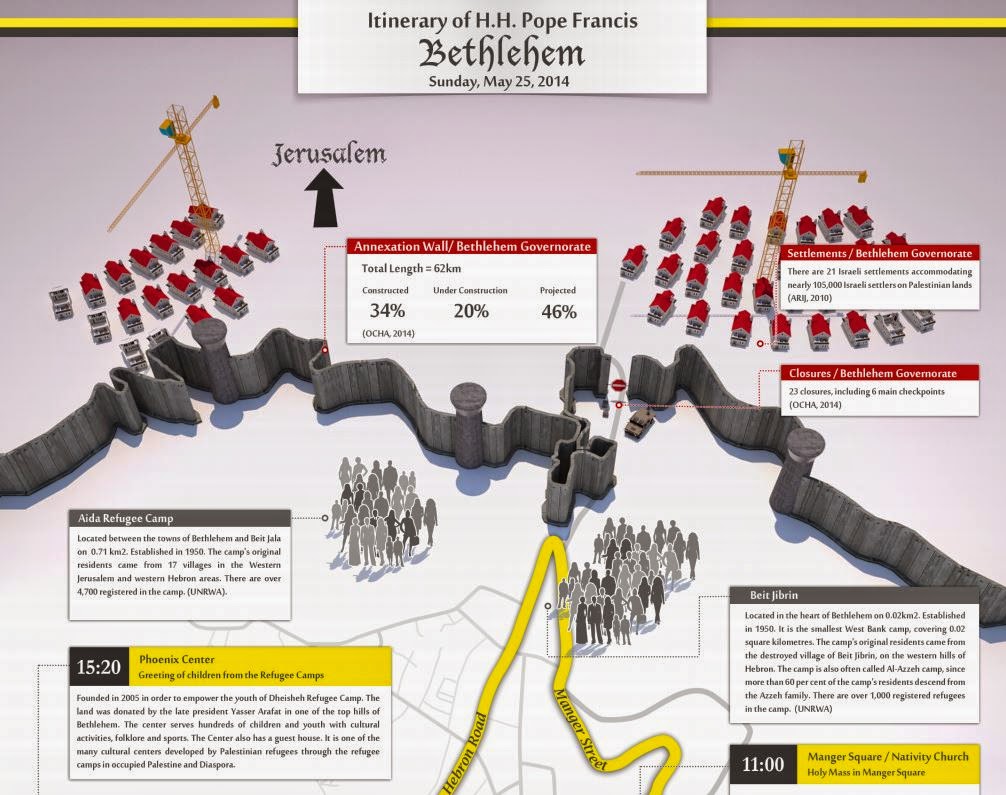 Reasonable people disagree about the contribution the security fence makes to the security of Israelis. But no one can reasonably doubt that it was built to protect Israelis from Palestinian terrorist murderers. And Francis ought to know this. Francis’s decision to hold a photo-op at the security barrier was an act of extreme hostility against Israel and the Jewish people.

As the former Cardinal of Buenos Aires, Francis may have heard of the November 2002 massacre at Kibbutz Metzer. Metzer was founded by Argentine communists in the 1950s. Metzer is located 500 meters from the 1949 armistice lines which made it an obvious beneficiary of the security fence.

But true to its radical roots, in 2002 members of the kibbutz waged a public campaign against the planned route of the security fence. They feared that it would, in the words of Metzer member Danny Dovrat, “ignite hostility and create problems” with the kibbutz’s Palestinian neighbors.

Thanks to that concern, on the night of November 10, 2002, a gunman from the “moderate” US- and EU-supported Fatah terror organization faced no physical obstacle when he entered the kibbutz. Once there he killed two people on the street and then entered the home of Revital Ohayon and executed Revital and her two sons, Matan, 5, and Noam, 4 years old.

Fatah praised the attack on its website and pledged to conduct more assaults on “Zionist colonizers,” and promised to continue “targeting their children as well.”

Had he actually cared about the cause of peace and non-violence he claims to champion, Francis might have averred from stopping at the barrier, recognizing that doing so would defile the memory of the Ohayons and of hundreds of other Israeli Jewish families who were destroyed by Palestinian bloodlust and anti-Semitic depravity.

Instead, Francis “spontaneously” got out of his popemobile, walked over to a section of the barrier, and reverentially touched it and kissed it as if it were the Wailing Wall. The graffiti on the section of the barrier Francis stopped at reinforced his anti-Semitic position. One of the slogans called for the embrace of the BDS campaign.
Although the economic consequences of the campaign of economic warfare against Israel in the West have been negligible, BDS’s goal is not economic. The goal of the movement is to dehumanize Israelis and set apart for social ostracism anyone who refuses to embrace the anti-Jewish slanders that Jews have no right to self-determination and are morally inferior to every other religious, ethnic and national group in the world.

And that is nothing compared to the other slogan on the barrier. That one equated the Palestinians in Bethlehem to the Jews in the Warsaw Ghetto. In other words, it denied the Holocaust.

By standing there, kissing the barrier with its Holocaust denying slogan, Francis gave Vatican license to Holocaust denial.

And that was just the beginning. 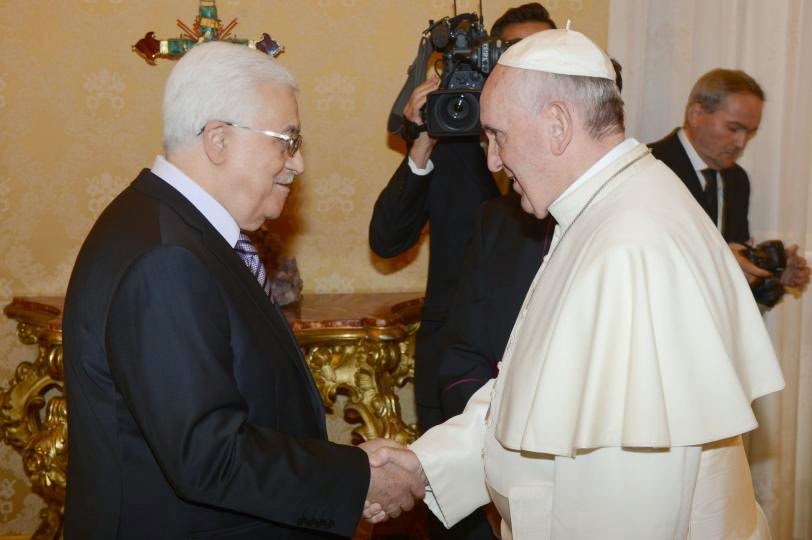 Pope Francis met with Fatah chief Mahmoud Abbas at his presidential palace in Bethlehem. When Israel transferred control over Jesus’s birthplace to Abbas’s predecessor Yasser Arafat in 1996, Arafat seized the Greek Orthodox monastery next to the Church of the Nativity and turned it into his – and later Abbas’s – official residence.

Standing next to Abbas on seized church property, the pope called Abbas “a man of peace.”

Abbas returned the favor by calling for Israel to release all Palestinian terrorists from Israeli prisons. And the pope – who interrupted Netanyahu when he told an historic truth – said nothing.

At mass at the Church of the Nativity on Sunday, Pope Francis prayed with Latin Patriarch Fuoad Twal. In his sermon Twal accused Israelis of being the present-day version of Christ killers by referring to the Palestinians as walking “in the footsteps of the Divine Child,” and likening the Israelis to King Herod.

In his words, “We are not yet done with the present-day Herods, who fear peace more than war... and who are prepared to continue killing.”

Rather than condemn these remarks, Francis echoed them.

“Who are we, as we stand before the Child Jesus? Who are we, standing as we before today’s children?” the pope asked.

“Are we like Mary and Joseph, who welcomed Jesus and cared for him with the love of a father and mother? Or are we like Herod, who wanted to eliminate him?” During his visit Monday to Jerusalem, Francis embraced the Palestinian mufti of Jerusalem, Sheikh Muhammed Hussein. Departing from his scripted remarks which called for the pope to refer to the mufti and his associates as “dear friends,” Francis called them his “dear brothers.”

Hussein has been condemned by the US and the EU for his calls for the annihilation of Jews in the name of Islam. 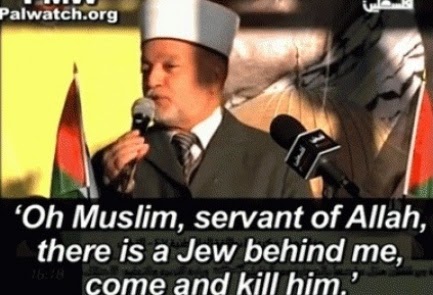 In 2012, Hussein said it was the destiny of Muslims to kill Jews, who he claims are subhuman beasts and “the enemies of Allah.” He has also praised suicide bombers and said their souls “tell us to follow in their path.”

Francis stridently condemned the anti-Jewish attacks in Brussels and Paris. And during his ceremonial visits to Yad Vashem, the Wailing Wall and the terror victims memorial he said similarly appropriate things. But all of his statements ring hollow and false in light of his actions.


Israelis and Jews around the world need to be aware of what is happening. Francis is leading the Catholic Church in a distressingly anti-Jewish direction.

(Blogger's Notes: There seem to be only two types of Latino the Hispanic people. Either Socialists or Fascists with nothing else much in between. Their direct ancestors the notorious Spanish Conquistadors, who cross-bred with native Indians and created a new race Latino in Continent South America, might have been really screwed-up in their fricking heads.)