Islam Could Disappear From China In Just One Generation 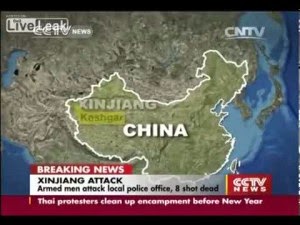 Islam could disappear from China in ten years. And is that a BAD thing? One day soon, Islam will have to be restricted or banned outright in countries where Muslims have tried to impose their beliefs and systems on the native population.

After the Beijing Olympics ended and the world’s eyes were no longer upon China – the government deployed soldiers throughout the Xinjiang province, Uighur rights groups say. Security forces made mass arrests of local Muslims and tightened surveillance of religious activities in Xinjiang’s southern and central counties, the rights groups say.


In some towns, prayer in public places outside the main mosque is forbidden and an imam’s sermon is limited to no longer than a half-hour. Since the end of the Olympic Games in late August, the Chinese government’s crackdown on Uighurs with alleged separatist ties in this oil-rich province has escalated.


You don’t get to set off deadly bomb attacks in China, as Muslims did during the Beijing Olympics, and expect not to get punished for it. Even though no group has claimed responsibility for the violence, Chinese authorities say Islamic separatists are behind it.

Chinese authorities have since enforced laws restricting Muslims in the northwestern region of Xinjiang from practicing their faith. 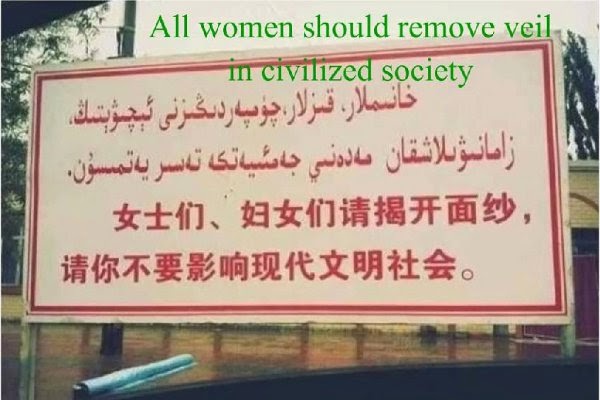 With prayers banned in public areas, private hajj trips not allowed, teaching of the Noble Qur’an not allowed in private and students and government officials forced to eat during Ramadan, China is enforcing laws and regulations restricting the practice of Islam.

In Khotan, signs posted in front of the grand mosque say the weekly Friday prayer sermon must not extend beyond than a half-hour. Prayers in public areas outside the mosque is forbidden and residents are banned from worshipping at mosques outside their town.

Under the rules, imams are banned from teaching the Qur’an in private and only official versions of the Qur’an are allowed. Studying Arabic is only allowed at special government schools. Government workers are banned from showing the slightest sign of religious devotion. For example, a Muslim civil servant could be sacked for donning hijab. 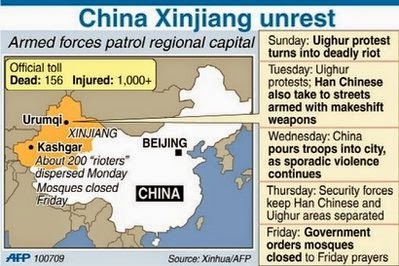 Islam Will Disappear from China in Just Ten years

Following a spate of political violence, security has been so tight around here that a 25-year-old Muslim jade dealer agreed to talk to a reporter only if they met 20 miles outside this historic Silk Road town in remote northwestern China.

"I wanted to study teachings like the Hadith," said the man who identified himself only as Hussein, referring to a collection of the prophet Muhammad's sayings. "I'm too old now. It makes me sad."

As children, Hussein and millions of other young Uighurs never attended the religious schools known as madrassas or prayed at mosques because of a government ban on Islamic education for those under 18.

Since Hussein never learned about religious laws governing marriage and family, he feels unprepared to have children, and he wonders whether future generations will be able to practice their faith before adulthood. "Maybe in 10 years, there will be no more religion (Islam) in Xinjiang (province)”, said Hussein.

Xinjiang's Communist Party officials have also curtailed Islamic dress and diet. During Ramadan, an Islamic celebration that ended in September, local authorities required some Uighur-owned restaurants to remain open during the day, when Muslims normally fast. Government employees have been told to shave their beards, and police have been ordering women to remove their veils.

"It's virtually martial law there," said Seytoff of the Uighur American Association, who calls Xinjiang province East Turkestan, the name the region was known by before being annexed by China in 1949. "East Turkestan is a police state. As long you're a Uighur-Muslim, you're a criminal suspect in China."

Since the end of the Olympic Games, the Chinese government's crackdown on Uighurs with alleged separatist ties in this oil-rich province has escalated, according to Alim Seytoff, general secretary of the Uighur American Association, based in Washington, D.C. 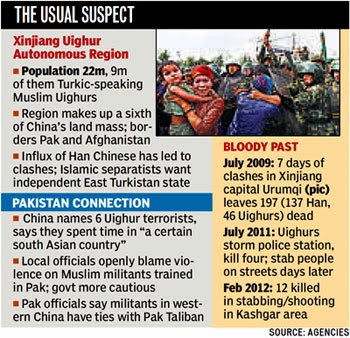