Rangoon currently is a COVID hell. Even the ruling military junta announced today that there are more than 1,200 corpses to be cremated at three big cemeteries in Rangoon and the crematoriums are to be running 24/7 to meet the demand.

Army is obviously so happy that they could kill the recalcitrant people of Burma (who would not surrender to their dictatorship) without wasting expensive bullets and endangering the lives of rapidly dwindling security forces. Finally the dreaded COVID is doing their jobs and making their lives much easier.

According to Dr. Aung Myint Maw the Deputy Head of Rangoon City’s Health and Sanitation Department the normal cremation load at all Rangoon cemeteries was between 100 and 150 every day and the crematoriums were running only one 8-hour-shift.

He added that at the beginning of July two shifts were needed to burn the rapidly increasing number of COVID deaths, and now they have been running three shifts 24/7 since mid-July, and on July-18 there were 1234 corpses requiring cremation.

Private charity groups have been extremely busy providing free funeral services since most families of poor COVID deaths could not afford a private funeral service and also a coffin. The ambulance vans have been bringing in sometimes up to five corpses bundled in dirty and contaminated bedsheets to the cemetery crematoriums in Rangoon.

Many deaths were COVID fatalities but most were the result of oxygen shortage in the city. Since the public hospitals and military hospitals have been refusing to admit COVID patients many ended back at their homes and they had been forced to rely on their own oxygen supply.

Without technical knowledge to properly use oxygen many COVID patients were killed by either high pressure oxygen or CNG poisoning since many families are refilling their old CNG (Compressed-natural-gas) cylinders with oxygen available at the privately-run oxygen plants. Bluish-colored corpses from CNG poisoning were clearly visible among the piles of COVID deaths just outside the crematoriums. 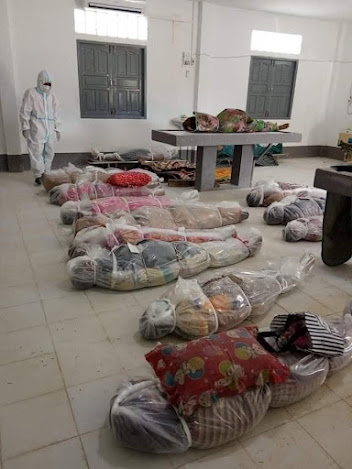 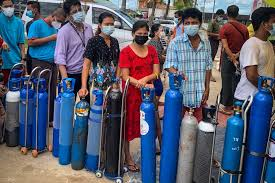 Is Burma at War With Itself?

Reports are coming from Myanmar that the situation in the country is dire as a result of the Delta variant of COVID-19. To make matters worse the military is hoarding the oxygen for themselves and their lackeys. People waiting outside oxygen supply stores have been shot at by Myanmar Army troops.

Basic medical care for COVID positive patients have been turned into illegal acts by the Myanmar military. COVID is also ripping through Myanmar's crowded prison system which is holding thousands of political prisoners since the military coup. Meanwhile Myanmar military continues to purchase military hardware from Russia, China and India worth hundreds of millions of dollars. The country is at war with itself.