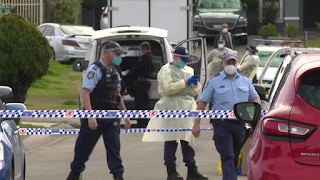 A woman in her 50s found dead in her southwestern Sydney home on Monday morning was a confirmed COVID-19 case, NSW Health has announced.

She is the fifth death linked to the current outbreak of the Delta variant and the 61st COVID-19 death recorded in NSW since the start of the pandemic. The woman is believed to be the mother of twin 27-year-old removalists who were charged by police over the weekend after they allegedly worked while infectious with the virus.

"NSW Health today sadly reports the death of a woman in her 50s who was a confirmed COVID-19 case," NSW Health said in a statement. "She was a resident of southwestern Sydney and a close contact of a COVID case. "This is the 61st death in NSW related to COVID-19 and the fifth of the current outbreak. NSW Health extends its sincere sympathy to her family and friends."

Police said in a statement they were called to a home on Thursday Place, Green Valley about 9.15am following reports of a concern for welfare. "Officers from Liverpool City Police Area Command attended and located the body of a woman, aged in her 50s, inside the home," the statement said. "A report is being prepared for the coroner. Inquiries continue."

Police blocked off the street with officers wearing PPE at the scene. Family members who were isolating in the home at the time were reportedly forced to quarantine in their cars outside while police were inside.

The twin removalists, along with a 21-year-old man, were charged on Saturday for allegedly failing to comply with NSW's public health orders.

The trio were travelling from Sydney's West Hoxton to Molong, in the NSW central west, on Thursday morning when one of them received a call saying he had tested positive for COVID-19. Police allege the crew continued to drive 30 minutes to Molong to finish the delivery before being escorted home. 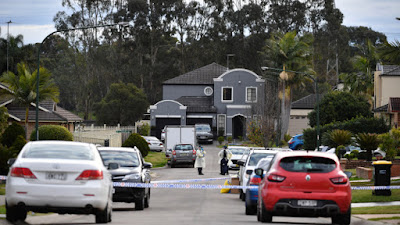 Woman in her 50s found Dead inside her home

New South Wales has recorded its fifth death from the COVID-19 Delta outbreak after a woman in her 50s was found dead inside her home in Green Valley in Sydney’s south west.

The ABC understands the woman is the mother of twin removalists charged with breaching public health orders after travelling from Sydney to the Central West. The brothers and another colleague received a call from NSW Health on Friday informing them that one had tested positive for coronavirus. It is alleged the trio continued driving to Molong to finish the delivery.

A NSW Health spokesperson confirmed the woman's death and said she was a confirmed COVID-19 case and a close contact of another case. "This is the 61st death in NSW related to COVID-19 and the fifth of the current outbreak," the spokesperson said.

Police said the removalists also went to Figtree in the Illawarra and stopped at South Bowenfels and Orange, before travelling to Molong. Police charged the 27-year-old twins and their 21-year-old colleague for breaching public health orders after they travelled the 300 kilometres journey from West Hoxton, in the Liverpool local government area (LGA).

Liverpool is among three LGAs in Sydney's south west which have been identified as areas of concern in the current outbreak. The men now face fines of up to $11,000 each and a maximum sentence of six months imprisonment. Deputy Premier John Barilaro yesterday described the removalists' actions as "careless, reckless and deliberate" and said any transmission could "swamp" the health system in the Central West.

(Blogger's notes: I had never imagined this sort of COVID Home Death could happen in a rich first world country like our Australia unlike same home-death cases happening commonly in poor third world countries like Burma and Indonesia.)